By the way, I was just kidding about the "I shall be silent" thing. Stephen A. Smith can suck it.

But anyway, over the next 25 days on this site, I'll be doing a regular feature in which I count down the top 25 plays of the Mark Richt era at Georgia -- something I thought about doing last year but didn't, for reasons I can't remember at the moment. But anyway, now that Mark's been in Athens for seven full seasons (minus one bowl game) and we've had the opportunity to watch our program regroup, soar to impressive heights, endure a brief trough, and then rise back up again, hopefully on its way to even greater achievements down the road, I figured this was a good time to take a look back at the individual moments that have made the team what it is today.

For that reason, this isn't going to be a rehash of the highlights most worthy of a wowee "SportsCenter" mention. Obviously we've had a lot of where-the-hell-did-that-come-from trick plays and eye-popping catches and whatnot over the past seven years, but this list is more about the plays that, even if they didn't stand out all that much at the time, signaled a milestone for a program looking to recapture its SEC glory years. Basically, I wanted "big play" to mean big in terms of the program's development, not just in the context of a single game.

Anyway, that list officially starts tomorrow with #25, but today's +5 will be five plays that just barely missed the cut because they took place either in a loss or in a game that, in hindsight, didn't end up meaning that much. So here are Five Plays That May Not Have Been All That Significant In The Grand Scheme Of Things But Were Still Pretty Cool: 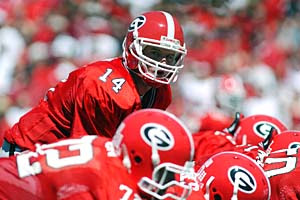 5. David Greene's mother of all fakes (Auburn 24, Georgia 17, 2001)
I don't recall David Greene having been all that highly touted as a recruit when he signed with Georgia out of South Gwinnett High School, but it didn't take us long to realize he was something special when he was handed the keys to the offense in Richt's first year. This play was a case in point: If memory serves, it was a few minutes into the second quarter, Dawgs facing a fourth-and-2 at their own 44. To the delight of the crowd, Richt elected to go for it, and everybody assumed he'd send Verron Haynes crashing across the line once again. Well, maybe not everybody -- but Auburn certainly did, and they pounced on Haynes the minute he got to the line of scrimmage. Only problem was, David Greene, strolling away casually with his back to the scrum, still had the ball. I wish somebody could find a YouTube of this for me, partly because mere words can't do justice to how beautiful this fake was, partly because I wish you could witness the spectacle of Tommy Tuberville going ballistic on the sideline screaming at his players to get off Haynes and go tackle Greene. Eventually they figured it out, but not before David had thrown a flawless 56-yard touchdown pass to Terrence Edwards. Even though that score put us up 14-7, we managed to lose the game, but still, with a freshman QB who had balls that big, we knew we had something special. 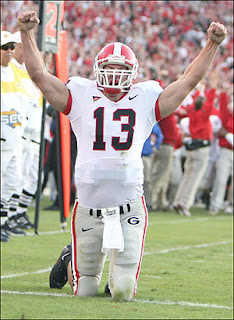 4. Spartan 47 (Florida 14, Georgia 10, 2005)
I've already recapped this play fairly exhaustively here, but anyway, the setup: Georgia was 8-0 heading into the Cocktail Party (which they'd lost 13 out of the previous 15 times) and could clinch the SEC East with a victory, but there was just one problem -- Shockley was hurt. Instead, we went into battle behind the much-maligned Joe Tereshinski III, and though we struggled every bit as much as one might expect, Tereshinski's awe-inspiring catch -- yes, catch -- in the third quarter allowed hope to burn bright in the hearts of Bulldog Nation for just a little bit longer. Facing second-and-7 from the Florida 9, Tereshinski had just enough time to hand the ball to Thomas Brown before getting pancaked by a Florida lineman. But when the DL got off Joe to go chasing after Tommy B., Joe raced his ass to the goal line, jumped up in the air, and caught a touchdown pass. It took several minutes for Verne Lundquist and Todd Blackledge to pick their jaws up off the floor after that one, and it's just a shame it had to be wasted in a loss. Poor Joe Tereshinski will never be remembered as a superstar quarterback, but he'll always be one of my favorite Dawgs for that play alone.

3. Tyson Browning's Lindsay Scott impression (LSU 17, Georgia 10, 2003)
Another pivotal conference game that unfortunately took place when it just wasn't our day -- Georgia outgained the eventual national-champion LSU Tigers by a ton but whiffed on three field-goal attempts, so we were still down 10-3 with about five minutes left in the game. A holding call on the first play drove us from our own 15 back to the 7, and when David Greene lobbed a screen pass to Tyson Browning, it looked pretty much like one of those just-get-the-ball-out-of-the-shadow-of-your-own-goalposts kinds of things. But somehow Tyson made it to the 20, then the 30, and with the Dawgs blocking like gangbusters the whole way, little 5'8", 171-pound Tyson Browning somehow ended up in the opponent's end zone, 93 yards away from where he'd started. LSU scored the winning TD on their very next drive, which was the buzzkill of all buzzkills, but it was still an awesome play. 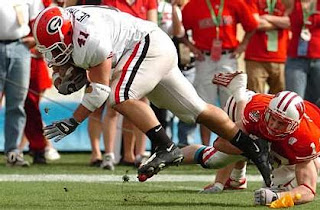 2. Jeremy Thomas's immaculate deflection (Georgia 24, Wisconsin 21, 2005 Outback Bowl)
This is another one of those plays I wish I had a YouTube to illustrate -- New Year's Day '05, Georgia leading Wisconsin 10-6 early in the third quarter and moving the ball pretty nicely on what was supposed to be a stout Wisconsin defense. First and 10 at the Wisconsin 24, Greene threw to Sean Bailey in the flat, but it was deflected by UW strong safety Robert Brooks -- right into the arms of our fullback, Jeremy Thomas. In a situation where many FBs would've fainted from the shock of simply having the ball in their hands, Thomas caught the deflection in stride and went 24 yards for the score. It helped, of course, that quite a few Wisconsin defenders appeared to have no idea what had happened, least of all Brooks himself.

1. Dude, you're getting Odell'd (Georgia 26, Auburn 7, 2003)
Ahhh, now this I've got a YouTube for. And I know some people are going to be mad that it didn't make the Top 25 list; I guess I just didn't see it as "pivotal" since Georgia was already up by a bunch in that game and Auburn wasn't exactly a juggernaut that year to begin with, but still, when people tell you this was the loudest they'd heard Sanford Stadium get in decades, they ain't lying. Auburn was down 19-0 early in the fourth quarter and had gotten down to the Georgia 2; on third and goal, Jason Campbell floated a pass over the middle that would've kept Auburn in the game -- had someone in a white uniform caught it. Instead, Odell Thurman batted it out of the air in the end zone, caught it firmly at the 1, and rumbled 99 yards for the game-icing TD. The crowd screamed wildly when Odell caught it and somehow only managed to get louder with each yard marker he passed on the way to the opposite end zone. When they cut to Tuberville on the sideline, he looked like his wife had just left him. (Yes, in case you were curious, I do love tormenting Tubbs.)

Your own Random Tens in the comments. And have a great weekend, everybody.
Posted by Astronaut Mike Dexter at 2:08 PM

that shoulda said "a link for #5"... either way, just goes to show it wasn't the last time they tried that play, and it seems to have worked each time.

I was in the Jamaica Airport "Margaritaville" lounge when the MOAF went down. I was the only person in the bar watching the game and when they pulled that off, i just looked around to see if anyone else saw what I just saw. I felt like somehow a Redstripe OD had given me some sort of beautiful hallucination.
Needless to say I was fairly disappointed when we landed in Hartsfield and I heard the final.

Amen on the JT3 catch too. He caught it with his heart.
Lookin forward to the to 25

Phantom non-holding call on Devery Henderson's KO return after Browning's score cost us that game, and went a long way toward elevating Nick Saban from medicore, 4-loss-a-season coach to Bama savior. Wish you had that on Youtube. Not to mention Billy Bennett's performance did not help our cause.

We should have been playing Ole Miss in the SECCG that year.

I'm pretty sure it was Arnold Harrison that tipped the Odell INT.

Matt Stewart of CSS summed that play up beautifully.. as the cameras were panning the crowd-gone-bezerk, he said simply "Goodnight, Auburn!"

"it seems to have worked each time."

Well, except for this season...

1) Greene to Johnson, 2002
2) Moreno's first TD against Florida (notable for, obviously, the *other* thing that happened on that play)

The 2003 LSU game can be used as Exhibits A-Z on how Georgia lost games 2001-2006. Missed FGs, general pants-crapping in the red zone (don't forget Greene's fumble at around the 10 or so), and random acts of balls that always seemed to just blow up (the fake punt). Billy Bennett made Nick Saban a very, very rich man.

I always remember what I said as Odell crossed the goal line. Turned to the guy next to me, and said "fuck Mark May." Made perfect, perfect senese.

A list worthy of those "journalists" over at ESPN. Like they are qualified to talk about sports more than any other fan. Half the time they are too coked out to know which sport they are hyping anyway.

I found that Greene to Edwards vs. Vandy play on an old tape and had to put it up on YouTube. A funny part I left out was one of the Dave's talking about Vandy's safety getting a 1600 on his SAT only minutes before getting completely fooled on this play.

I didn't remember that Joe T 3 had two games where a fake punt was called and he couldn't get the yardage. I remembered TN '04 but not the LSU game.

I actually think I might have stuck the Joe T catch in my top 25. I still remember, I was in a meeting and convinced my boss that I could silently watch the game over by by seat. To make a long story short, I had a slight eruption when that play happened, causing 50 or so people to look at sympathetically, wondering what terribe ailment I suffered from.

I thought that the 4th down TD pass in the '01 Auburn game was to Fred Gibson, not Terrence Edwards.