The 25 Biggest Plays of the Mark Richt Era, #2:
The Hobnail Boot.

Most first-year coaches, no matter how talented they are or how successful they end up being, need a few years to really get things in place and start winning the big games. It stands as a testament to just how lucky we Bulldogs are to have Mark Richt that in Richt's first year -- actually, in just his fourth game as Georgia's head coach -- we already had an indication of just how special the Dawgs were going to be under his leadership.

Richt's first three games had been a fairly predictable blowout win over Arkansas State, a frustrating last-minute loss to South Carolina at home, and a sloppy but convincing win over the Arkansas Razorbacks. Nothing to sneeze at, but nothing that would indicate Georgia was capable of knocking off a top-10 Tennessee team in their own house, either. Georgia had beaten Tennessee for the first time in a decade the previous year, but that was in Athens against a solidly mediocre Volunteer squad rotating two freshmen at QB; this was in Knoxville against a team that was touted as a possible national-title contender in the preseason. (Yes, yes, I know it's hard to conceive of a Casey Clausen-led team being touted for anything more prestigious than the Outback Bowl, but just willfully suspend your disbelief for a minute, I'm trying to paint a picture here.)

Anyway, the Vols had already matched the 11-point spread after one quarter and looked like they were well on their way, but then Georgia decided to make it interesting. First Damien Gary took a punt 72 yards the other way early in the second quarter, then Fred Gibson caught a TD pass from David Greene on Georgia's next drive, and all of a sudden Georgia was actually ahead. The two teams went into the fourth quarter tied at 17, a tie that Billy Bennett broke with a field goal with about five minutes left in the game, but Travis Stephens dashed all our hearts to the pavement by juking around a bunch of defenders for a 62-yard TD catch with under a minute to play.

Those of us assembled to watch the game at my friend Elizabeth's house in Grant Park were already reaching for consolatory beers and preparing our "Well, at least we played 'em close" speeches when Phil Fulmer made the debatable decision to squib-kick the ensuing kickoff with 44 seconds left to play, allowing Georgia to start their final drive at the Vols' 41. Two beautiful passes to Randy McMichael rocketed us down to the Tennessee 6 in short order, and then . . . well, I'll let Larry Munson talk you through the wonderfulness that was P-44-Haynes: 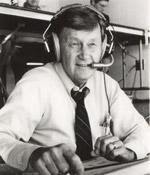 Ten seconds, we're on their 6. Michael Johnson turned around and asked the bench something. And now, Greene makes him line up on the right in the slot. We have three receivers, Tennessee playing what amounts to a 4-4, fake, and there's somebody TOUCHDOWN MY GOD A TOUCHDOWN! We threw it to -- we threw it to Haynes! We just stuffed them with five seconds left! My God almighty, did you see what he did! David Greene just straightened up and we snuck the fullback over -- Haynes is keeping the ball, Haynes has come running all the way across to the bench. We just dumped it over, 26 to 24. We just stepped on their face with a hobnailed boot and broke their nose! We just crushed their face. We dumped it over, David Greene brought us flying down the field . . .

My only regret is that I didn't get to hear that call firsthand, but hey, that's what the magic of mp3s is for -- and besides, it wasn't like Verne Lundquist wasn't pretty amazed himself.

It was a stunning upset and exactly the kind of feat we hadn't been able to pull off for at least a decade, if not more. In previous years the Dawgs would have been lucky to hold a lead at all on the Vols, and even if they'd had a chance to win it late like the 2001 Dawgs did, they would've most likely gotten freaked out by the pressure and found a way to fall just inches short of pulling off the win. But somehow a first-year coach with a first-year starting quarterback found a way to put the distraction of 100,000 screaming Big Orange fans out of their heads and very calmly win a game they had no business winning. That would become a recurring theme over the next few years, as Richt's Dawgs currently hold a 25-4 record in true road games (with nine of those wins coming against ranked teams and six of them with Georgia as an underdog).

And the effect that the Tennessee win had on the team's mindset is something that cannot be underestimated. In a post titled "Why the Hobnail Boot Play Matters Most," Paul Westerdawg drops a little insider knowledge and explains thusly: 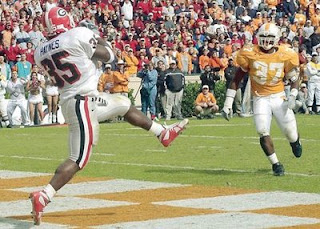 After the 2004 season, I talked with one of the graduating players about his career at UGA. . . . We talked about buying into the Richt System, and he said it was in Knoxville (his FR year) that the entire team finally bought in.

Prior to that blessed catch by Verron in 2001, there were still doubters. Most of the seniors had bought in during Mat Drills because they had no other choice. They could either try it Richt's way or spend the next 12 months in agony. Three games into the season, significant pockets of the rest of the team still had their doubts.

It's one thing to look at the team from the point of view of a long-suffering fan who'd watched the team drop games like this over and over again under Goff and Donnan, but imagine it from the players' perspective. You've got a brand-new head coach who's making you do stuff you haven't had to do before, and for the first time in four years, the nation as a whole doesn't think enough of you to put you in the top 25 -- and yet you've still managed to go into the lion's den and knock off the #6 team in the country. After that, how can you not believe in yourself? And how can you not believe that you've got a chance at some very special things? Unlike Paul, I don't necessarily believe that the season would've been a dud had we lost that game, considering that nobody (except for perhaps Richt) was expecting us to win it in the first place. But the line separating "elite team" from "pretty good team" is a fine line indeed, one that teams can cross and re-cross many times over the course of a season, and I think there's every reason to question whether Georgia's elevation into the "elite" ranks the following year would've been possible without the Hobnail Boot victory to give them that extra push and convince them that they were capable of greater things, that the drill could be finished and the lid knocked off.

I'm not enough of a scholar of UGA history to be able to say "Biggest Georgia upset EVER," so I'll leave it to wiser folks like Westerdawg and Mayor Kyle to determine the relative merit or irrational exuberance of that claim. But I can't imagine that there were many past Georgia upsets that had consequences as far-reaching as that one. Even now, when you watch an unranked Georgia team go into Jordan-Hare and beat the tar out of #5 Auburn, or when you see Georgia go into Jacksonville as nine-point underdogs and come out 12-point victors, tip your cap to Richt but don't forget to also tip it to guys like Greenie, Verron Haynes, McMichael, and the rest of the guys who took the field in Knoxville on that day in October: They helped kick-start Georgia from a perpetual good-but-not-great program into the fearless contender that we've been fortunate to watch for most of the past seven years.
Posted by Astronaut Mike Dexter at 8:47 AM

Well, I'm pretty sure I kow what #1 is gonna be! It was a great way to end a cold, rainy, miserable day.

Verne Lundquist didn't call that game. CBS used two hacks to do play-by-play (Andre Ware and Craig Bolerjack, if memory serves which speaks volumes about either a)my lack of a life, or b) a warning to never play me in trivial pursuit). Anyway, they kept calling Damien Gary "Damien Gray" until someone from the SID physically walked to their booth and stuck a foot in their ass.

why did we go for two after the touchdown?

Has there ever been a bigger swing of moods in a game?

I went from thinking we won on Jermaine Phillips' INT to despair on Stephen's TD. I literally collapsed on the floor, covered myself with a blanket, and didn't move. I could hear the play-by-play from under the blanket on our drive, and after each play I peeked out a little more.

I watched P-44 still on the floor, wrapped tight in a blanket, then exploded in a room full of elated buddies. We just up and ran outside, high on the moment. Just awesome.

A good frind of mine saw Haynes at the Golden Pantry that very night, and got him to sign a UGA coozy with the date and score of that game. One of my most prized UGA possessions, no doubt!

Another thing I'll remember from that game is gettting jobbed by the refs all aday long, especially on spots, of all things. It would have been devestating to lose that one, for a varite of reasons.

We didn't actually go for two -- Greene just took a knee on the XP attempt. I remember thinking it was weird at the time, but I think Richt's rationale was that there was no point in even attempting the XP and giving Tennessee even a microscopic chance of blocking it and returning it for 2. With only five seconds left, Tennessee wouldn't have had time to set up for a tying field goal; it was either a Hail-Mary TD or nothing, and if they did somehow hit a Hail Mary then they'd win the game whether we had 26 or 27.

So anyway, the extra point couldn't possibly have mattered in the grand scheme of things, and Richt didn't want to take even an ounce of risk to kick it -- overly cautious, perhaps, but I can't argue with his thinking.