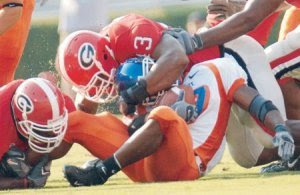 After last year, I don't know if you could quite call Tony Taylor an "unsung" hero, but I think he was definitely under-sung. In two seasons as a starting linebacker, Tony would notch 152 tackles (101 solo), 13 tackles for loss, four sacks, eight INTs, and two forced fumbles. He finished his Georgia career by straight-up terrorizing the last four opponents we faced in 2006, and is currently holding his own as a special-teams player with the Atlanta Falcons. And if they ever put together an Unabridged Dictionary of Football Clichés, Tony's picture belongs next to the entry for "motor never stops running." He would move heaven and earth to be in whatever position he needed to be in to make a play at any given moment; I'm fairly certain he goes to bed at night dreaming about how to snatch the ball away from people. It's not too much of a coincidence that Tony had his "breakout" performance in a game that was also a breakout of sorts for a talented but inexperienced Georgia team two years ago.

The situation was a lot like Clemson 2003 -- rebuilding team facing an up-and-coming program primed for an upset -- only even more so. Instead of replacing our offensive line and linebacking corps, we were replacing basically our entire passing game -- college football's all-time winningest quarterback and his top two receivers -- as well as the heart-and-soul leaders at all three levels of the defense (DE David Pollack, LB Odell Thurman, and FS Thomas Davis) and a beloved defensive coordinator (Brian Van Gorder). Instead of facing an unranked Clemson squad coming off a 7-6 season, we were playing a top-20 Boise State squad that had been a single score away from an undefeated season the year before. We did have the whole home-field thing going for us, but that apparently didn't make a lot of difference to the legions of pundits and "scheme"-obsessed bloggers (y'all know who you are . . . suckas) picking Boise State to burst unequivocally onto the national scene with a shocking upset between the hedges.

Once toe met leather, though, the enthusiasm proved to have a shelf life even shorter than that of Gerardo, the Cadillac Cimarron, or "Studio 60 on the Sunset Strip." In fact, I'd have to estimate that it lasted about 10 seconds, tops.

On the game's very first play from scrimmage, Boise State QB Jared Zabransky fired a pass straight into the arms of linebacker Tony Taylor. It wasn't as though Georgia put a tremendous amount of pressure on him, either; Tony simply put himself in the right place at the most opportune time and grabbed it. Georgia took it the other way and scored in four plays, but whatever mystique Boise had -- and whatever doubt remained about Georgia's defensive mettle -- was crumbling long before D.J. Shockley scampered 14 yards into the end zone.

Boise's drives for the rest of the first half: interception (turned into another 7 points for the Dawgs), fumble, fumble, punt, interception (turned into a Georgia FG), interception, fumble on a botched snap (seven more points for the Dawgs), end of the half. Even the most Kool-Aid-soaked Bulldog fan couldn't have predicted such a meltdown. And Mark Richt kept his foot on the gas the rest of the way, stretching a 24-0 halftime lead to 38-0 before BSU -- having relegated Zabransky to the bench -- got into the end zone about halfway through the third quarter. Final score, a five-touchdown napalming of the Broncos and a thrilling jump-start for what would prove to be an all but out-of-nowhere conference-title run.

You couldn't have scripted a better way for Georgia to begin a question-mark-laden season. A defense that had picked off only five passes the entire 2004 season picked off four in one half of the '05 opener; a QB who had been described as enormously gifted but raw eagerly grabbed the reins and marched the team down the field time and time again with the authority of a seasoned NFL veteran. And the doubters who figured that the Dawgs had no choice but to crawl into a dark hole once the Greene/Pollack era ended were treated to a tall, frosty glass of Shut The Fuck Up. And it didn't happen because an overwhelmed BSU team gave the game away, at least not in the beginning -- Tony Taylor and his boys stepped up and took it. That game, and the season that followed, proved that the Dawgs could reload with the best of 'em.
Posted by Astronaut Mike Dexter at 8:05 AM

To his (strange) credit, Heismanpundit really turned around on the Dawgs this year...going as far as to rank them #1 at the end of the year. He probably overcorrected, but it's nice anyway.