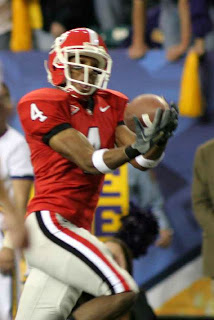 Getting to the 2005 SEC Championship Game was an accomplishment in and of itself. After the 2004 season, we'd lost both the winningest quarterback in D-IA history (David Greene) and his top two receivers; on the defensive side we'd lost David Pollack, Odell Thurman, and Thomas Davis, the talented emotional leaders at each level of the defense. Other than Phil Steele, I don't think anybody expected us to win the East Division and play for the title.

And yet I still considered it a "must-win" game. That was our third appearance in the SECCG in Richt's five years as coach; we'd won the first one convincingly and got hammered just as convincingly the following year. Lose a second straight title game and I was really worried that, in spite of the amazing way in which we'd reloaded in 2005, we'd start to be looked upon as the SEC equivalent of the Braves, a team that does great in the regular season but can't seem to win a title. And unfortunately, we were going up against the number-three team in the country -- the same squad that had whupped us up and down the field the last time we played at the Georgia Dome. I remember being shocked that we were only a two-point underdog on the day of the game.

Did Vegas know something I didn't? They might've.

After being held to a three-and-out on our first drive, we did the same to LSU, sacking their unsackable quarterback JaMarcus Russell for a 14-yard loss on the Tigers' first play from scrimmage. LSU punted from deep inside their own territory, and we didn't even need all that great a return from Thomas Flowers to start our ensuing drive at LSU's 45.

Sometimes when you get good field position like that, you decide to throw caution to the wind and go for it all on the first shot -- and that's what Richt decided to do. Shockley stepped back in the pocket and launched one right into the middle of the field, and Sean Bailey made a perfect over-the-shoulder catch in stride; he only had to shake one defender before galloping into the end zone with little more than a couple fingerprints on his jersey.

It was one of those plays that surprised both sides of the stadium in equal measure -- the LSU fans couldn't believe we'd suckerpunched their lockdown defense so perfectly, and the Georgia fans couldn't believe we had either. In the '05 and '06 seasons, our receivers dropped a lot of balls, and I can remember thinking "Oh, shit, please don't drop this" even as the ball was leaving Shockley's hand. But Bailey made it look easy, and just for good measure, he caught another sweet TD pass for 29 yards on Georgia's very next drive. All of a sudden, Georgia had a 14-0 first-quarter lead on the number-three team in the country, and LSU never quite looked like the same team after that. Georgia cruised the rest of the way to a three-touchdown victory and the second SEC title of Richt's tenure.

The first-half collapse against West Virginia in the bowl game was a crappy way to end the season, but it could only take so much of the shine off what Georgia accomplished that year. With a brand-new starting QB and a defense that had lost all of its marquee names to the NFL, we won 10 games for the fourth season in a row and took home a conference championship trophy that everybody had assumed would go to LSU or Tennessee. That season was a huge confidence-builder for the program in the sense that it showed just how ably Georgia could rebuild, and how much talent was still in the pipeline even after the end of four glorious years of David Greene and David Pollack; it also turned D.J. Shockley, who'd spent three years waiting patiently in the shadows, into a folk hero in the span of 11 starts.

As for Bailey, he unfortunately missed not only the Sugar Bowl but also the entire 2006 season thanks to an injury incurred in bowl practice -- and his presence was sorely missed as our young receiving corps struggled through a miserable '06. It's no coincidence, though, that things turned right around once he returned for the 2007 season. Number 4 has been our leading receiver with 37 catches for 594 yards and four TDs this year, and here's hoping he gets a bunch more on New Year's Day to impress the NFL scouts.
Posted by Astronaut Mike Dexter at 9:09 AM