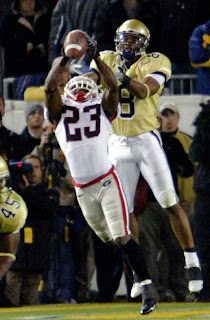 Most. Nerve-wracking. Game. Ever.

Even more so than the fourth quarter of Georgia-Auburn '02, I think. The Jackets and Dawgs traded touchdowns early in the first half and then settled into a grueling trench battle for the next 45 minutes of game time; there were moments, sitting there in a pretty equally divided room at Manuel's Tavern in Atlanta, when I was openly pondering the possibility that we'd be walking out of there getting taunted by victorious Techies for the first time in five years. I probably aged myself an extra 10 years in those four hours alone, though in all fairness, the near-constant alcohol drip probably didn't help.

Fortunately, a familiar pattern began to emerge late in the third quarter as the game became a classic field-position battle: Georgia would go nowhere and punt, Tech would go nowhere and punt, but each time Thomas Flowers' punt returns would inch us just a little bit closer to Tech territory. Finally, with less than six minutes left in the game, Flowers returned a punt 33 yards to set us up at the Tech 39, and five plays later, D.J. Shockley dropped a beautiful TD pass right into Bryan McClendon's hands to give us our first lead of the game.

There were still three minutes left, though, and Tech made pretty good use of them -- Reggie Ball executed what was probably the greatest play he ever made against Georgia when he scrambled for 30 yards down to the Georgia 22. Three plays later, Greg Blue had to save a touchdown by mugging Calvin Johnson at the goal line, but the resulting pass-interference penalty positioned the Jackets at the Georgia 11.

And then Tim Jennings, God bless him, went to work. Or maybe it was Reggie Ball going to work, because both of them did exactly what you would expect them to do in a situation like that one: Reggie threw into coverage, and Timmy leaped in front of Damarius Bilbo and grabbed the ball right out of the sky. It was so perfect you had to wonder whether it hadn't been prophesied thousands of years ago in some Biblical passage. Jennings ran it back to the 34, and Georgia only had to run out a little over a minute's worth of clock before they'd officially clinched their fifth straight win over the Jackets.

Hey, at least Reggie didn't have a chance to get the downs wrong.
Posted by Astronaut Mike Dexter at 10:12 PM

You were nervous in Manuel's Tavern of getting taunted? Yeah, try sitting smack dab in the middle of the Tech alumni section - in one of the only parts that was 95% yellow.

Seemed clear to me, and still probably does now, that we were resting our behinds for the LSU game. That was two times in two years Richt suckered in LSU with the rope-a-dope (recall in '04, when we had that 13-3 stinker against Marshall the week before LSU).

And if you think about it this year, we only really started getting our stuff straight against Tech once the UK/UT game went final.

And the part that really makes me smile is Jennings pointing at Reggie during his return.

By the way, I'm loving this series. Good job!