The 25 Biggest Plays of the Mark Richt Era, #18:
Joe and Martrez save the day. 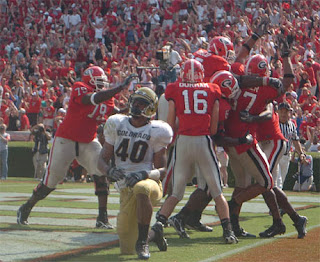 Or, as it has come to be known, the Toaster Game. After consecutive barely-even-challenged blowouts of South Carolina and UAB, I'm sure all of us Georgia fans were expecting another beatdown -- if not a third straight shutout, considering that the Buffaloes had scored all of 23 points in their first three games and had the 114th-ranked offense in the country at the time. The Buffs, however, had other ideas. They threw the home crowd for a loop by charging right down the field on their first two drives of the game, and with Bernard Jackson and Hugh Charles running right past our defenders time and time again, held an unfathomable 13-0 lead just a few minutes into the second half. (Just for the record, the Stafford fumble that led to Colorado's last field goal was what prompted me to throw the chair in my kitchen; it wasn't until Danny Ware fumbled on Georgia's next drive that I threw the toaster. Just wanted to make sure everyone had their facts straight.)

After one more ineffective drive, a three-and-out in which Stafford also got dinged for an illegal forward pass penalty, Richt decided the writing was on the wall and pulled him (final tally for the day, 8-of-16 for 76 yards, no TDs, obviously). In went Joe Cox, the redshirt freshman who had been lurking just behind Stafford and Joe Tereshinski in the QB competition that had taken place over the previous summer. Cox wasted little time in getting the offense moving -- on his first drive, Georgia went all the way down to the Colorado 10 but fell just short of converting on a 4th-and-4; second drive, he piloted the offense 58 yards in under a minute and a half, with Brannan Southerland scoring Georgia's first points on a thrilling 23-yard catch-and-run.

On the next drive, however, the Dawgs once again failed to convert a 4th-and-4 deep inside Colorado territory, and Cox got the ball back at the Colorado 43 with two and a half minutes and two time-outs to get the winning touchdown. Needless to say, my sister and I -- who had astutely come home from Loco's Pub at halftime so that we could rage, curse, and throw things in relative privacy -- were close to soiling ourselves at this point. The Dawgs shot right down the field, but after Kregg Lumpkin was thrown for a 1-yard loss on second-and-4, I had horrible visions in my head of Georgia hitting the trifecta of fourth-down failures deep inside the Colorado red zone and losing to an 0-3 team.

But on the next play, Cox calmly sat back in the pocket and found 6'4" tight end Martrez Milner over the middle for the go-ahead TD. I think it's safe to say that Milner had maybe the most frustrating Bulldog career of anyone since Jasper Sanks, but on that day, he was a hero, all right. Once the massive dogpile in the end zone had cleared out, Georgia got right back to work on defense, and when Tony Taylor picked off a long Bernard Jackson pass at midfield, the Sanford Stadium crowd could put away their cyanide capsules and breathe easily, having dodged not just a bullet but an ICBM.

Obviously a top-10 team needing to sneak by a team that would end up finishing the season 2-10 was embarrassing enough, but I'm sure I don't need to describe to anyone how horrible it would've been if we'd actually lost. In actuality, of course, we were only staving off the humiliation for a couple more weeks, as we soon fell into a 1-4 stretch that included losses to Vanderbilt and Kentucky; had we fallen to Colorado, though, it's fair to wonder whether our midseason slump would've been 1-6 and sent us into a tailspin from which we'd still be trying to recover today. Joe, Trez, thanks for saving our asses. And to toaster ovens everywhere, I've lived every moment since then carrying the guilt of what I did that day, and I hope that you can forgive me.
Posted by Astronaut Mike Dexter at 9:40 AM