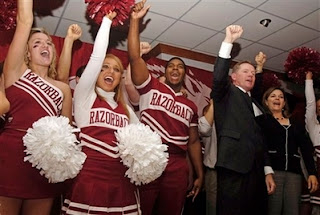 Yayyyy! Go Hogs! Becky, get Michigan's AD on the phone.

I'm really only a casual fan of the Atlanta Falcons; regular readers know my true allegiance lies with the Redskins. But that meant that when Bobby Petrino dumped the Falcons for the Arkansas job yesterday, I could at least sympathize with the Atlanta faithful: Outstanding college coach with questionable people skills, comes to the NFL expecting to impose his will on the pro ranks just as he did in the NCAA, fails utterly, bitches out before his commitment is up -- where have I heard that one before?

The difference, of course, is that Spurrier didn't even have another job waiting for him when he called it quits. But now, as with Spurrier's departure, I'm left with a dilemma: If I'm glad that he's gone, can I still be pissed at him for leaving? 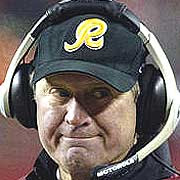 Make no mistake -- Petrino, like Spurrier before him, was by all accounts a shitty NFL coach, though for different reasons. Spurrier thought he could just plunk the Fun-'n'-Gun into the NFL without working any harder at it -- he even made fun of the NFL coaches who worked longer hours than he apparently planned to -- and quit once he found out that fielding his own real-life fantasy team full of former Gators wasn't actually going to win any games. Petrino was handed a much less workable situation in Atlanta, where he'd only set up shop for six months before his star QB got indicted on federal charges, but based on reports of his godawful rapport with his players, you have to wonder whether he could've been successful even if he and Bill Belichick swapped teams for a season.

I thought Petrino was a bad hire for the Falcons, just like I thought Spurrier was a bad hire for my 'Skins, and nothing he did over the ensuing 11 months made me believe otherwise. So on the one hand, yes, the Falcons are much better off in the long run that he's gone. But that doesn't mean I can't be gobsmacked by the classlessness with which he left.

I mean, leaving after only season would've looked bad, but leaving after only thirteen games? After you'd told the team owner to his face that you weren't going anywhere? It all feeds into the image of Petrino as an inveterate job-hopper who, with 13 new employers in a 25-year coaching career, makes Nick Saban look like a rock of stability and loyalty. Petrino never met a job he wouldn't diss for something bigger; sure, everyone knows about that furtive (and ultimately fruitless) meeting on Bobby Lowder's private jet back in 2003, but he threw his name into the mix for the LSU and Ole Miss jobs in 2004 and for the Oakland Raiders job in 2005. He's that douchebag you meet at a party and try to start a conversation with, and the whole time he's looking over your shoulder to see if there's someone more important in the room that he could be talking to. 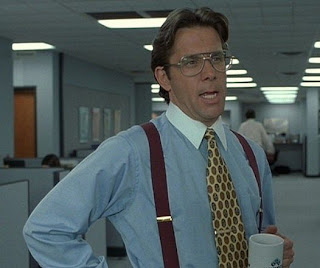 Kind of like the Lumbergh of coaches, in other words.

(And yes, I know I pimped Petrino hard-core for the Alabama job about this time last year, but c'mon -- a coach who can't stop taking new jobs, at a school that can't stop relieving coaches of theirs? It would've been a shotgun wedding, for sure, but one made in heaven.)

So anyway, it's all spilled milk now, but there is some valuable advice Arkansas would do well to heed right about now -- as the old saying goes, "A man who marries his mistress leaves an opening at that position." Hogs fans, enjoy whatever success Pignocchio affords you the next three or four years, just don't bank on it being any longer than that.

As for the Falcons, I wholeheartedly agree with the counsel of the very wise Mark Bradley: Gather up as much money as it takes and go after Bill Cowher. This franchise is a federal disaster area at the moment, and Cowher may be the only guy out there with the toughness, determination, and integrity to get it cleaned up. If you do get him, though, give him as much time as he needs. Part of the reason Cowher did so well in Pittsburgh was because he stayed for fifteen seasons, an entire geologic era by today's NFL standards; he set up a system, got it established, got the players to buy in, and ran it for 10 playoff appearances and a Super Bowl title. If you're so offended by Petrino's lack of loyalty -- as well you should be -- then show the next guy more. 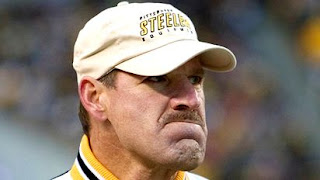 Besides, how can you not love this face?
Posted by Astronaut Mike Dexter at 8:00 PM

Email ThisBlogThis!Share to TwitterShare to FacebookShare to Pinterest
Labels: coaching follies, football, teh suxxorz, you know what I blame this on the breakdown of? society

I realize Petrino is a douche bag, but I have a hard time getting worked up over this last episode. He was in a marriage that clearly wasn't working; one so bad that even the most conservative Canon lawyer in the world would grant an annulment. He could have stayed the rest of the season "for the good of the kids" except there weren't any kids. Him leaving in the middle of the season is low rent and classless, but high rent and class isn't going to help the Falcons at this point. If anything, he may have unwittingly given them a rallying point to help bring together a pretty divided team. It's Much Ado About Nothing, iyam.