I've only been to Knoxville once for a game in my entire life, and I may never be able to go again -- the 2003 experience pretty much ruined me forever.

I met up with Mark, Kristen, and Matt in Knoxvegas and we stayed at the apartment of my friend Darren, a fellow Georgia grad who'd somehow ended up with a job covering Tennessee sports for the Chattanooga paper. Saturday afternoon, we ventured into downtown, raided our bank accounts, and went in search of tickets; we ended up buying four for $125 apiece from a guy on a street corner right at the edge of campus. "I can't believe we just handed five hundred dollars over to a complete stranger," Kristen said as we walked toward the stadium. "These tickets had better be real. And it had better be a good fucking game."

The tickets were real, and they actually weren't terrible -- lower deck, northeast corner of the end zone, and fairly close to the Georgia band so that we'd have something to drown out the sound of "Rocky Top" being played every 30 seconds. The game wasn't bad, either. Georgia put a quick FG on the board after a Tennessee fumble, then got a TD at the very beginning of the second quarter; the Vols scored a TD on their next drive, though, when Mark Jones grabbed what should have been an interception out of Decory Bryant's hands and, with Decory flat on the ground, booked 90 yards for a touchdown. As the first half drew to a close, Georgia was still ahead 13-7 but Tennessee, aided by a couple dumb Georgia penalties, was driving deep into Georgia territory. After two rushes on goal-to-go failed to score, the Vols called a time out with seven seconds left, then lined up to throw Jabari Davis at the goal line one more time.

But Casey Clausen got bumped by the fullback as he stepped back to make the handoff, and the ball ended up on the turf. Clausen and Thomas Jones Davis got to the ball at the same time and the ball squirted away from them -- right into the path of strong safety Sean Jones, who scooped it off the ground and started running like he stole something, which he kind of had. Jones ended up with five or six blockers running behind him, but it wasn't long before those teammates stopped being "blockers" and really became more of an entourage escorting Jones down the field; Tennessee's players, still tangled up in the scrum at the goal line, never got anywhere near him. Ninety-two yards, all along a bonkers Georgia sideline, until the refs were signaling touchdown in the opposite end zone.

Now, the four of us were sitting in the exact opposite corner of the stadium from where all this madness had started, so Sean was probably at about the Tennessee 40 before we figured out what was going on. But it wasn't long before the TD had gone up on the scoreboard and the stadium, supposedly one of the loudest in the country, had gone quieter than a mausoleum. Well, the UT fans, at least. 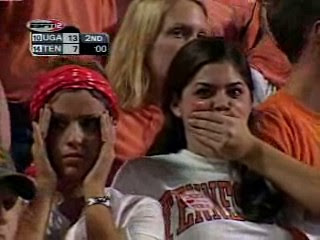 God, I love this picture.

A completely different, by which I mean "deliciously demoralized," Tennessee team took the field in the second half. Starting with the second-half kickoff, the game went as follows: Tennessee punt, Georgia touchdown, Clausen interception, Georgia touchdown, another Clausen interception, another Georgia touchdown . . . you get the idea. And in the Georgia section -- which remained full and rowdy even as the rest of the stadium cleared out -- it was an all-you-can-eat Schadenfreude buffet. Clausen, of course, was the dickwad who'd missed the previous year's Georgia-Tennessee game due to a shoulder injury and later said, "I think most definitely if I'd played in that game, we would have won by at least a couple of touchdowns. I could've played on one arm and we probably could have definitely beat Georgia, but they didn't want to risk it." As it turned out, even two arms wasn't enough for the Iceman, who wound up completing as many passes to Georgia players as he did to his own in the second half and suffered the ignominy of getting pulled for backup C.J. Leak about halfway through the fourth quarter. By that time, of course, the only sound in the stadium was the sound of us Bulldogs in the corner chanting "CAAAA-SEY, CAAAA-SEY." It. Was. Glorious.

That win sent Clausen out with an oh-fer lifetime record against Georgia, but more importantly, it helped propel a Georgia team with a brand-new offensive line and linebacking corps to their second straight SEC East title. And Sean Jones, God bless him, helped ensure that I wouldn't have "Rocky Top" running through my head for the rest of the freaking weekend.
Posted by Astronaut Mike Dexter at 8:44 AM

I had probably the best possible viewpoint of this play. I was in the Redcoats at the time, and we had lined up right along the UT sideline in preparation for our halftime show.

Jumping around at a UT failure about 10 feet from Coach Phil might have been the best. thing. EVER.

Ah, my first disagreement with your rankings. This is a top-fiver (and incidentally, my favorite UGA play ever). Sean Jones could rape my dog, and I'd still love the guy.

If this is #12, there must have been some doozies in the top five.

Oh, and it's Thomas Davis who got to the ball at the same time as Casey Clausen.