A recent statement by ESPN commentator Stephen A. Smith has aroused no small amount of indignance among sports bloggers around the country. Here it is in full (h/t Senator Blutarsky): 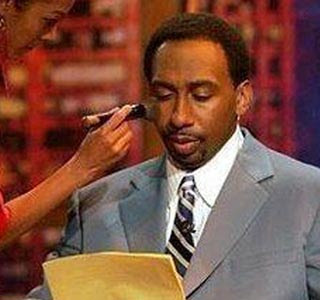 "And when you look at the internet business, what’s dangerous about it is that people who are clearly unqualified get to disseminate their piece to the masses. I respect the journalism industry, and the fact of the matter is . . . someone with no training should not be allowed to have any kind of format whatsoever to disseminate to the masses to the level which they can. They are not trained. Not experts. More important are the level of ethics and integrity that comes along with the quote-unqoute profession hasn’t been firmly established and entrenched in the minds of those who’ve been given that license.

"Therefore, there’s a total disregard, a level of wrecklessness that ends up being a domino effect. And the people who suffer are the common viewers out there and, more importantly, those in the industry who haven’t been fortunate to get a radio or television deal and only rely on the written word. And now they’ve been sabotaged. Not because of me. Or like me. But because of the industry or the world has allowed the average joe to resemble a professional without any credentials whatsoever."

Obviously, you can see why bloggers are so outraged by this; as a blogger myself, I feel their pain. But as someone who has also undergone the "training" and earned the "credentials" of which Smith speaks, I also feel qualified to offer my response -- bloggers, holster your guns, sheath your swords, for Mr. Smith is exactly right.

Congress shall make no law respecting an establishment of religion, or prohibiting the free exercise thereof; or abridging the freedom of speech, or of the press; or the right of the people peaceably to assemble, and to petition the Government for a redress of grievances.

Congress shall make no law abridging the freedom of speech. As far as the federal government is concerned, you may say whatever you like. But do you see "ESPN" mentioned anywhere in that amendment? Nope. Which means that ESPN can abridge your speech however they please. If you're sitting there banging away at a blog post about coaching searches or Barry Bonds's legal troubles or the incompetence of Michigan's athletic director, and Stephen A. Smith storms into your apartment or cubicle or whatever and tells you that you don't know what you're doing and must stop immediately, then guess what? According to the Constitution, you have to do just that. I'm still not exactly sure how our Founding Fathers ended up granting more political power to a cable network that wouldn't be founded for another 192 years than in the national government they themselves were founding, but it's all right there; the facts don't lie.

But even if the Constitution did invest in us a truly universal freedom of speech beyond even the power of ESPN to curtail it, that wouldn't necessarily mean that we bloggers were qualified to take full advantage of it. Let me give you a recent example.

Earlier this year, ESPN undertook one of the biggest, most talked-about projects in the history of sports journalism to figure out which current athlete is the most "Now." They consulted not only with their own commentators and analysts but also with a huge slate of athletes, coaches, politicians, B-list celebrities, and (I'm assuming) scientists and statisticians to come up with their answer. It was a truly ambitious effort, and I think we can all agree that the competition for the title of "Most Now" was more intense than that of the World Series, the Super Bowl, or even the Olympic Games.

Now, I want each of you bloggers out there to take a deep, honest look inside yourselves and answer truthfully: Could any of you have done that? I know I couldn't. None of us could. Not one of us alone has the resources, the contacts, or the sheer critical mass of pop-culture knowledge to do what ESPN did. Even if I were to join forces with Sunday Morning Quarterback, Orson Swindle, Brian Cook, and Kyle King, the five of us working together would not be able to do that project a fraction of the justice it deserves. I'm not sure any of us even knows what "Now" means; I know I don't. Thus, in our uncredentialed ignorance, we would probably flail around blindly before finally settling on some unworthy joke of a winner who would only bring shame and ridicule to the proud mantle of "Now." Certainly someone who would pale by comparison with . . . whoever ESPN chose, I don't actually have any idea who it was. But I'm sure he/she was an awesome and deserving individual.

For all the invective directed at him, Stephen A. Smith was right: We bloggers simply don't have the know-how or the professionalism to do what he and his colleagues do. And that "wrecklessness" he describes has an amazing capacity to cause hurt and division. We owe it to the general public to leave breaking-news reporting to the ethical, credentialed establishment.

No doubt Smith's words had to sting my fellow bloggers, but he wasn't being self-serving or elitist; he was merely holding up a mirror to the sports blogosphere, and it should come as no surprise to our unqualified, muddy rabble that we didn't like the glaring honesty of what we saw. Some of my fellow bloggers will rise up in unfocused anger to call Stephen A. Smith a hack, an irrelevance, a poseur who's only terrified at seeing his own influence dwindle, most likely as a result of his apparent belief that the volume of one's voice is an adequate substitute for actual insight; I, however, will repeat none of those accusations. Other bloggers may turn up their noses at me, may even call me an Uncle Tom, but I refuse to shoot the messenger. Stephen A. Smith has taught us a valuable lesson about this business of blogging, my friends, and as uncomfortable as it is, it is one we would do well never to forget.

And now, as per Mr. Smith's instructions, I shall be silent.
Posted by Astronaut Mike Dexter at 6:21 PM

Email ThisBlogThis!Share to TwitterShare to FacebookShare to Pinterest
Labels: blogs that are better than mine, miscellaneous stupidity, teh suxxorz

Please, no! You've got to be kidding! You can't be silent. I already had plans to get you something on your Christmas list.

Interesting SA would say that considering the Philly Inquirer wants to strip him of his column. This is Stephen A. Smith people, not Red Smith.
http://tinyurl.com/34oyot

Stephen A Smith is a pompous @$$. He makes Michael Irvin and Deion Sanders look like a couple of humble guys. Whenever he is on camera, I usually respond in one of 2 ways:
1) change the channel
2) hit mute on the remote (if there is something coming up later that I want to see)
Seriously, they could have Jessica Alba and Angeline Jolie dancing in thongs on the screen and if Stephen A Smith was talking and the mute button wasn't working, I would change the channel.

But the good news is that as a Grady grad and a former media worker, I can still blog- whoohoo!

Nicely put. Stephen A. Smith seems like a man very insecure in his own job. Just as volume is no substitute for insight, neither is talking as though you are trying to spit out pages of a thesaurus.
---"someone with no training should not be allowed to have any kind of format whatsoever to disseminate to the masses to the level which they can."
All I have to say about that is 'whaaa?'

Nice, well done. No incomplete sentences AND you toed the line. Way to give to those unethical bloggers.

I was hoping for something a bit more cynical from a former Red and Black guy, but I guess certified journalists have to stick together. If volume was an indicator of correctness, Stephen A. Smith would be the smartest idiot in the world.

luckily if sas said it, nobody even heard it.

how does sas feel about his coworker and fellow "journalist" kirk herbsreit "wrecklessly" throwing shit around as fact??

Why the picture of Ludacris?

You know the beauty of the blogosphere? Hits, views, whatever is totally, 100% based on the writer's ability to draw readers. Nobody forced me to check out this blog. I read it because Doug brings the funny. Stephen A. Smith (heretofore referred to as ASS), would draw nary a page view from me, like, ever. If you squeezed all the reasonable insight out of ASS's entire body of work into an 8 oz. glass, you'd still have 7.99 oz. of empty glass to fill with vodka so the .01 oz would be quasi-palatable.

"...and Stephen A. Smith storms into your apartment or cubicle or whatever and tells you that you don't know what you're doing and must stop immediately, then guess what? According to the Constitution, you have to do just that."


Not sure I follow your logic there. That view of the First Ammendment isn't really supported in our nation's courts.

Thanks, anonymous. I knew there was going to be one.

I KNOW that ESPN has real-time info on # of viewers at any given moment, and they have got to notice a dip whenever SAS comes onto the screen. I know many people, including myself, who switch the channel the moment he comes on.

Rise up, and maybe, just maybe, ESPN will turn down SAS' volume.

I have to disagree with your argument categorically.

First, the argument does not stand because what proves too much proves nothing. Case in point is that if all is required to be an ethical and honest journalist is training then all journalists are ethical and honest. The debacle of ESPN choosing the NC game opponents is clearly an unethical and dishonest attempt and biasing the voters.

Clearly the journalism industry relies upon an unbiased stance in order to provide clear and accurate information. Surely one cannot claim that ESPN, in its entirety, is unbiased. The premise that webbloggers must adhere to the standard of unbiasness is incorrect. Besides none of the webbloggers claim professional status neither do they claim they are unbiased. Anyone who reads blogs understands or should understand the clearly biased content contained within webblogs.

ESPN seems to think that simply because one has education one is a professional. The most important part of being a professional is character. Character of which ESPN has none.

Each of SAS's arguments have serious logical flaws and they do not adhere to any sort of objective standard which is why I reject them categorically.

SAS is not just an ass. He's a whiny one. ("He went to woooorrrrrk" was his (lame) reasoning as to why Cal Ripken's induction into the Baseball Hall of Fame wasn't all that significant.)

and this comes from a man that pronounces the word "ask" like axe.