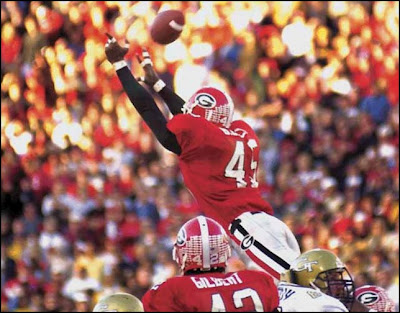 Boss Bailey was in the vicinity of 6-foot-3 and 233 pounds during his senior year at Georgia. Those numbers by themselves weren't anything unique, but one number was: a vertical leap of 42 inches at the 2003 NFL combine. And that was actually a few inches shorter than what he'd managed in preseason practice the previous year.

Coming into the Georgia Tech game, Bailey had blocked two field goals, one against Tennessee and the other against Ole Miss a month later. I saw the first on TV and the second in person, and both times Boss rose up from behind the line of scrimmage like an angel of death, arms outspread, to bat the ball to the ground in a manner that was almost vengeful. Had I been the kicker in either of those instances, I'm sure I would've had trouble not crapping my pants.

Boss's third FG block of the season came in the th revival of Clean Old-Fashioned Hate, which was a "trap game" if ever there was one -- it came right on the heels of Georgia's thrilling last-minute victory over Auburn, which clinched our first-ever trip to the SEC championship game, and the SEC championship game itself, in which we had a shot at our first conference title in 20 years. For the entire week leading up to the game, the Tech message boards were crackling with hope that the Jackets would catch the Dome-bound Bulldogs napping, and apparently the oddsmakers agreed -- the fifth-ranked Dawgs were only a nine-point favorite in their own house over an unranked, 7-4 GT squad.

Instead, it was the Jackets who were caught napping. Georgia scored on their first three drives of the game, flying down the field with little more than token opposition from the Tech defense and staking the team to a 17-0 lead early in the second quarter. It was certainly exciting, but sitting in the student section down close to the field, I couldn't help but think that Tech had to get up off the mat sooner or later; sure enough, on their next drive A.J. Suggs snuck a deep ball past the Georgia secondary and got Tech down to the Georgia 30 before the field-goal unit was brought in. For the first time in the game, Tech stood to put a crimp in Georgia's momentum.

But Boss Bailey had other ideas. With the help of two fellow special-teamers who double-teamed Tech's left guard, Boss got a running start and launched himself into the air like a freaking Atlas rocket, and got just enough of a hand on the ball to send it spinning harmlessly to the turf; the ball landed right in front of the section I was sitting in, and the crowd went nuts. Decory Bryant picked it up and started running, and if memory serves, he was just a block or two away from springing a six-point return -- but it didn't matter, since David Greene took it the rest of the way in three quick plays and extended the lead to 24-0. Tech fumbled the ensuing kickoff and fumbled away another one later on in the second quarter, and by the time that marching bands came out on the field for the halftime show, Georgia had a 34-0 lead; by game's end, that score turned into the biggest blowout the Dawgs have ever handed the Jackets on any field.

Boss's big block was significant in the context of the game, obviously, because it more or less snuffed out the last real hope that Tech had to make things remotely competitive; it was obvious from that moment on, if it hadn't been already, that we were deep inside their heads. (It even earned its own article in The Red & Black the following Monday.) But the block, and the win it led to, had huge implications for the rivalry as a whole and the two programs' respective places in it. Georgia fans still use "51-7" as a rallying cry whenever the Saturday after Thanksgiving rolls around; it's the kind of thorough ass-whipping that takes years to live down even when doesn't take place in a vicious rivalry game. And for the next five years, all the way to the bitter end of Chan Gailey's tenure on the flats, Tech took the field against Georgia with 51-7 glowing vividly in their imaginations. From that point on, even when Tech came into the UGA-GT game having every reason to think that they could hold their own against the Dawgs -- or even that they were the better team, as one could argue was the case in 2006 -- they just never looked like a team that honestly believed they could win. Instead, they looked like a team that had gotten a relatively recent 44-point curb-stomping from their bitterest rival and as such would be content to simply leave the stadium alive.

In spite of the fact that he was only in his first year as Tech's coach, Chan Gailey was the subject of widespread fire-the-coach demands of varying degrees of seriousness in the wake of the 51-7 game. As it turns out, that game did get Gailey fired, it just took a few years. Make no mistake, it was an 0-6 record against Georgia more than anything else that got Gailey ushered out the door, and it was the 2002 game that ensured Tech would be a basket case every time they played the Dawgs. When Boss soared up above the line like Superman and blocked that kick in 2002, he supamanned more than just a field-goal attempt, he supamanned an entire Georgia Tech program, and for setting in motion a sequence of events that was probably the greatest source of gridiron Scahdenfreude in Georgia history, he deserves a spot in the history books.

Incidentally, a month later I actually saw Boss in person at the Harrah's casino in downtown New Orleans the night after Georgia capped off their dream season with a win over Florida State in the Sugar Bowl. He was with his older brother Champ -- whom you may have heard of -- and an entourage of folks I didn't recognize; in reality Boss is only three inches taller than his brother, but in my memory he was at least a head taller than everyone around him and could've kicked the ass of anyone else in the casino. He looked like a nice guy, but then, I didn't have to try and kick a football past him. For which I consider myself fortunate.
Posted by Astronaut Mike Dexter at 11:32 AM

Scahdenfreude squared: Wasn't it two years later that VT beat them by the same score?

I love this particular series, even if I don't always agree with your rankings. It's just toooooo much fun to relive these memories. What a nice Christmas gift to your readers.
Thanks.

I am also starting to realize that Decory Bryant is involved in more than his fair share of these plays in one way or another; he's a damn good Dawg that you have renewed my appreciation of with this series.

It is also notable that the NCAA actually enacted a rule following the 2002 season that prohibited players from getting a running start to jump up and block field goals.

I think it was created by Phil Fulmer's cronies in the same way that the "no-huddle" was banned from the SEC before Mark Richt's second season at UGA.