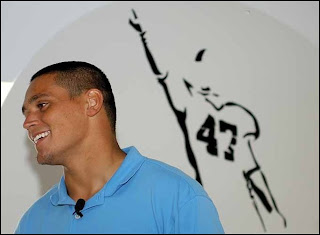 This may be a head-scratcher for a lot of people, because I doubt that anyone can remember this play specifically. No doubt everyone remembers the challenge from Pat Dye on the Paul Finebaum show the week before, who didn't think that the Dawgs were "man enough" to overcome a tough, experienced Alabama team in Tuscaloosa; most of us also remember the Billy Bennett kick that won it and the Thomas Davis pick on the very next play from scrimmage that iced the victory. But it wouldn't have been possible without David Pollack once again powering into the backfield and doing what he did best.

Georgia had come into the game on fire, scoring touchdowns on two of their first three drives to take a 14-9 lead into halftime; the Dawgs pushed their lead to 24-12 early in the fourth quarter before the cracks started showing. Alabama immediately went 68 yards in nine plays to pull within five points, and then, on the second play of Georgia's next drive, David Greene threw a pick that Charlie Peprah ran 35 yards back into the end zone for Bama's go-ahead score. A two-TD lead had evaporated, and the Dawgs were suddenly right back behind the eight ball in terms of proving the doubters wrong.

They made it to midfield on their next drive before stalling and punting the ball back to Alabama, and the Dawgs managed to down the ball at the 13. On Bama's first play, Tony Gilbert and Boss Bailey swallowed Santonio Beard up on a draw play two yards behind the line of scrimmage; that didn't come as too much of a surprise, given that Georgia had been pounding Alabama's ground game all day to the tune of 2.9 yards a carry, but on the next play Brodie Croyle -- who had been having a pretty efficient passing day up to that point -- dropped back to throw one. And David Pollack, a sophomore, fought through Alabama's offensive line -- a line which, if memory serves, returned all five of the previous year's starters -- and got just enough of Brodie to take him down three yards behind the line.

It wasn't the kind of sack guaranteed to make anyone's highlight reel; at three yards, it was more likely to get lost in a box score and never be celebrated by anyone outside of Georgia's locker room. But Pollack's never-say-die attitude on that play turned a makeable 2nd-and-12 situation into a much more daunting 3rd-and-15. On the next play, Georgia left Croyle with nobody to throw to and the QB could only scramble for six yards; not only did he come nowhere near the first down, but Will Thompson pushed him out of bounds at the end of the run, stopping the clock. Georgia would have four minutes and all three time-outs to go for the winning score.

As it turns out, though, they probably wouldn't have needed that much time. Michael Ziifle had to punt from the shadow of his own goalposts, and Damien Gary fielded it just inside Bama territory, taking it 15 yards to the Alabama 34 before being taken down. With more than three and a half minutes left and all their time-outs still in hand, Georgia could simply run Musa Smith at the line over and over again; the clock had ground down to a mere 42 seconds before David Greene took the ball one yard closer to the end zone and Bama burned their last time out. Cue Billy Bennett's 32-yard field goal, Croyle's game-ending pick, game over.

Looking back, it was really a whole sequence of events that took place for the Dawgs to win the game and prove they were "man enough" despite Dye's (very calculated) prediction. But Pollack's sack was what set it all into motion. And thus it also set into motion a very "manly" win, an 11-1 regular season, and a drought-breaking SEC title. For all the highlight-reel-making plays that Georgia made that season, the thing that really demonstrates a team's character is the plays they make that they know probably won't be replayed on "SportsCenter" that night. Georgia's motors, and Pollack's in particular, ran just as strong in the latter kind of plays as they did in the former, and that, more than anything else, is what took us to 13-1 that year -- and a 71-19 record overall under Richt's leadership.
Posted by Astronaut Mike Dexter at 10:06 AM

I don't know if you are aware of this, but the ad banner above your banner is an ad for gaywheels.com- "a gay-friendly automotive resource", not that there is anything wrong with gay people wanting to own cars.

Great play. I was sitting in that endzone.

With that being said...this one might be too symbolic for my tastes. I mean, in that game alone, you have Bennett's FG and Fred's ridiculous catch; I'd even put Pollack's USC pick-6 ahead of this play.

With that being said, good on you for not going with the easy outs, and yeah- when Georgia football was at its best in the early Richt era, we were a quiet, fundamentally sound group of asskickers.

Heh. Two "with that being saids" in a row. Just doing my Bob Costas impression is all.

@jasonc - what sites are YOU visiting that a contextual ad delivery site would send you gay car ads?

and what ad banner are you talking about anyway, I don't see one on my view of the site...

The banner at the top of this site is from Google's AdSense program, and it rotates through a number of different ads. I can only assume that someone at Google found out my car, the VW Jetta, topped Car Talk's list of the cars most favored by gay men. In other news, I'm going out and getting a Chevy Silverado 3500HD dualie with the DuraMax diesel as a sort of late Christmas present to myself.

Firefox with Adblock Plus == no gay car ads on my screen, or any others, for that matter.

Good luck with the mileage on that dualie, though.

Speaking of cars, I got a chance to see your dad's Acura this weekend - a bit dusty from the travel, but quite nice indeed.

Now the ad is for some debt relief CD. I don't visit financial websites and I don't have any debt. I do check my bank acct from time to time, but I think Adsense is putting random stuff up there. Or maybe sense Doug is such a liberal, it matched the ad to that.