Baby sis is currently in the midst of a blog hiatus that is scheduled to last until January 1, so I guess it's up to me to tell the story of what happened to her this past week.

Sis spent last week in London, visiting some friends she met during the semester she spent abroad during her sophomore year at UGA. She got a (relatively) cheap ticket on Air Canada from Atlanta to Heathrow with a stop in Toronto; she flew back Sunday, and when she landed in Toronto at about noon, there was a foot of snow on the ground. Her flight to Atlanta at about 5:30: cancelled. The last flight to Atlanta that night: also cancelled. She spent the night in the airport, and the next morning was told by the Air Canada folks that they couldn't put her on a plane until Tuesday. So she said eff that and spent an additional two hundred bucks to get one of the last two tickets on a Delta flight leaving for Atlanta at 5:30. At about 8 or 8:30 Monday night, she finally touched down on American soil, having spent about 30 hours in the Toronto airport and an additional 11 hours or so in the air.

In honor of baby sis's great misadventure, this week's +5 is my Five Worst Airport Experiences Ever, though you'd probably have to take any two of them and put them together to make something as bad as what she went through. 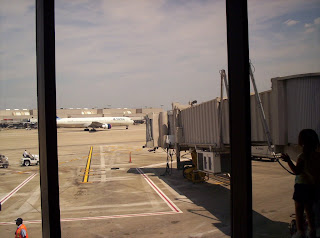 Atlanta Hartsfield-Jackson-Whatever, June 2006
Expounded upon here. Basically, I got to the gate about 25 minutes before my flight to White Plains was supposed to leave, sat there, waited, and without so much as a "last call" the plane left without me. One minute I'm sitting there screwing with my iPod, the next minute I look up and they're changing the board from "White Plains 12:09 p.m." to "Myrtle Beach 2:00 p.m." After a very Twilight Zone-ish 30 minutes or so, AirTran put me on the next flight to White Plains, which brings us to . . . 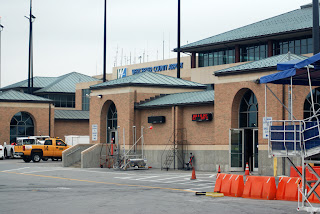 White Plains, June 2006
My flight to Westchester County actually ended up getting off the ground at about 7 o'clock, and we had to circle the airport about three times because of bad weather in the New York area. We finally land a little before 10, and when we pull off the runway, the captain says we have to just sit there for a little while because there have been lightning strikes in the area and they don't want to send the ground crew out in those conditions. That's right: They'll let a plane with 100 people on it land in those conditions, but the ground crew, who is apparently made of sugar, can't go out there. We sit there for about an hour, then finally pull into the gate, and it takes another 45 minutes for our bags to start showing up on the carousel. I then take a cab, followed by the Metro-North Railroad, followed by the N Train, to my friend's house in Queens.

You're probably asking yourself, "Why the fuck did you fly into White Plains instead of an airport that's actually in New York City?" Well, I got a cheap ticket on AirTran for seventy bucks. But when you add the cab fare, the train ticket, and the subway pass, it probably ended up costing me about the same as a ticket to LaGuardia would have. Never mind that I didn't get to Astoria until 1:30 in the morning, which -- given that I'd left Birmingham for the Atlanta airport at about 7 that morning -- means I probably could've driven to New York and gotten there sooner. (In fact, Mapquest confirms that yes, I could've done that.) Lesson learned: The $70 ticket to Westchester County is a bitch goddess who cannot be trusted. 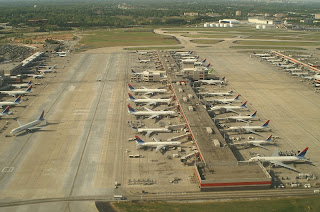 Atlanta, sometime in 1997 or so
Not much to tell about this one, other than I was on a four o'clock flight to Dulles that didn't end up leaving until after 1 a.m. and I finally got to Washington about three in the morning. Again, I could've driven and probably saved myself some time. 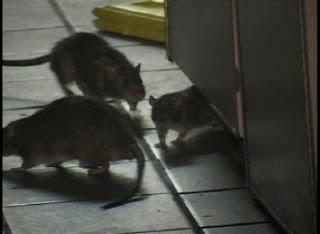 Washington-Dulles, sometime in the summer of 2003
Due to some tricky logistics, I ended up having to take the latest flight from Atlanta to Washington and then spend the night in the airport before somebody could come pick me up and drive me out to my grandparents' house in West Virginia the next morning. It was the first time I'd ever spent the night in an airport, but obviously I'd been stuck in airports for almost that long during the day on previous occasions, so I didn't think it was any big deal. I set up shop in a lounge in the main terminal and tried to sleep as much as I could, but when I looked down I saw rats. Rats, in the primary international gateway to the capital of the free world. They weren't New York subway rats, size-wise, but they were close. Suffice to say you're not getting much sleep when you know those bastards are scurrying around within a few feet of you, in an airport or anyplace else. 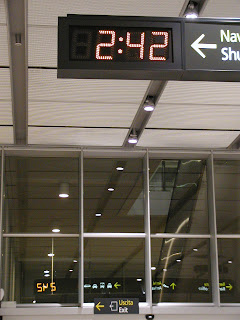 Venice, Italy, May 2005
This wasn't the airport's fault, but again, I had to spend the night there, and this time I had to spend it with a bad head cold I'd contracted in Florence a few nights prior. With the cold being intensified by the changes in air pressure on three separate flights between Venice and home, I pretty much wanted to die by the time I got back to Georgia, and between my illness and the fact that I'd been wearing more or less the same clothes for 36 hours, they had to handle me wearing hazmat suits.

Anyway, welcome home, sis . . . you know, if you'd stayed in Toronto just a few hours more, you would've qualified for Canadian citizenship. And now the Ten:

1. Pet Shop Boys, "It's Alright" (10" version)
2. David Cross, "My Child Is Enthralling, Especially When It Says Something Unexpectedly Precocious Even Though It Doesn't Understand What It Just Said!"
3. Patton Oswalt, "A Brief History of Shitty Comedy"
4. The Clash, "The Guns of Brixton"
5. Ice Cube, "Say Hi to the Bad Guy"
6. The Beastie Boys, "The Sounds of Science"
7. A Tribe Called Quest, "What Really Goes On"
8. BT, "Nocturnal Transmission"
9. Patton Oswalt, "The Best Baby in the Universe"
10. King Floyd, "Groove Me"

Feel free to share your own Tens and/or airport horror stories in the comments.
Posted by Astronaut Mike Dexter at 6:19 PM

I simply refuse to put the time in when they start jerking me around, so my worst experience deals with a orthodontically challenged, balding hippie working the gate at Air Tran Dulles telling me that he did not need to change my connecting flight because if I "ran through the concourse" at Charlotte I coul dget to the connecting. I did only to be told that it was sitting there because the pilot was concerned about some gauges overheating.
No sleepovers, though.

In high school, I spent four hours on the runway in Denver - not able to get off the plane, just sitting on the ground. All because Air Force One was sitting right behind us, and couldn't move because of some delay in President Clinton's schedule. I'm not saying that's why I voted for Dole later that year, but it certainly didn't help ol' Bill's cause.

I also got to spend 10 hours once in LAX after I (intentionally) missed a flight, but I got drunk and read "Hearts in Atlantis" cover-to-cover. Not in that order, I don't think. Had fun, though.

And a few bonus tracks

25 college kids. UGA's Model UN team. Flying to Chicago out of Atlanta. Evidently, it's snowing in Chicago, so our 10:50 flight gets canceled after we arrive at the gate. So we all promptly turn around and head back to the ticket counter, where our head delegate gets our tickets transfered to the next flight, at 11:50. New tickets get confirmed and one by one we get the sticky tags put on our bags. Halfway through, the flight gets canceled again. American has canceled all flights to Chicago for that day.

The very helpful lady at the American counter once again rescheduled our flight, this time putting us on a US Airways flight. All 25 of us head over to the US Airways counter. Where they tell us that indeed, they do have a block of seats reserved, but it's not associated with our names, and we all must be transfered one by one onto this flight which leaves in an hour. No problem, right? Except she typed. So slow. And only five people got transfered before the flight left. Five people. In an hour. The other 20 of us were sent back to our homes, to leave for Chicago the following morning.

When we got to Chicago it was 60 degrees. There was no snow. I just wanted to share that little bit. No snow for the Georgia kids. Because God hates us.