The 25 Biggest Plays of the Mark Richt Era, #9:
The Jon Stinchcomb fumble recovery nobody saw. 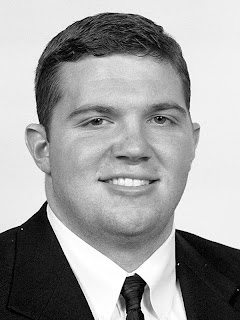 Being raised Catholic is a pretty good way to understand the concept of humility; being an offensive lineman is another. There's no category for you on anyone's fantasy team. You don't accrue any stats that can be measured quantitatively -- except maybe for sacks allowed, which is basically a measure of how often you fucked up. The day that one of your number wins the Heisman Trophy or NFL MVP is the day George W. Bush comes out in favor of gay marriage and the devil starts salting the roads in hell. It figures that the above picture was probably the best picture I could find of offensive tackle Jon Stinchcomb in anything other than a New Orleans Saints uniform; it also figures that the biggest play he was ever involved in as a Bulldog is a play that most people don't know he had anything to do with.

But it was Jon Stinchcomb, not David Greene or Musa Smith or Michael Johnson, who scored Georgia's second touchdown in the epic 2002 win over Auburn that clinched Georgia's first-ever trip to the SEC title game. The setup: After accomplishing next to nothing offensively in the first half, Georgia's offense finally started making some headway against an extremely good Auburn defense, punching it into the end zone on their first drive of the second half to make the score 14-10. Auburn answered with a long Jason Campbell scramble (I just realized that rhymed, heh) on their next drive to pull away 21-10, but a 32-yard run by Musa Smith on the second play of Georgia's next drive took the ball out from the shadow of Georgia's own goalposts and had the Dawgs in business once again. Eight plays later, an Auburn player jumped offsides to give the Dawgs second-and-goal at Auburn's 4 yard line.

What happened next is a matter of some debate, mainly over exactly where Jon Stinchcomb recovered the ball. But there is little dispute over the fact that when David Greene fumbled on the ensuing play trying to sneak over right tackle, the ball hit the turf short of the end zone. For a split-second, Auburn had a free shot at snuffing out what was maybe Georgia's best drive of the night. But then Stinchcomb took matters, and the ball, into his own hands.

The official game record says that Stinchcomb grabbed the ball at the Auburn 1 and took it into the end zone himself; nearly every news report I read about the game says that the ball rolled into the end zone and Stinch recovered it there. Either way, the touchdown that pulled Georgia within four points toward the end of the third quarter is officially credited to Stinchcomb. No disrespect to any of the players who played for Jim Donnan, but that's the kind of heads-up play that we just didn't make all that often under the previous regime. And without it, there might not have been a 70-X-Takeoff, a trip to the Georgia Dome, or an end to Georgia's SEC championship drought.

So thanks to Jon Stinchcomb for kicking ass in (relative) obscurity all those years, and here's to long and successful NFL career. You may not get your name on the marquee like some of the skill players, but as Jonathan Ogden and Orlando Pace have proven, you can still make the big bucks. And thanks to DAve for recommending this play to the list. When I turn this series into a coffee-table book that will be treasured by literally tens of readers, you're getting a "special thanks" credit on the title page. Or something.
Posted by Astronaut Mike Dexter at 9:03 AM

I was sitting in the corner there, about 12 rows up. I'm pretty sure Stinch recovered it in the endzone.

"When I turn this series into a coffee-table book that will be treasured by literally tens of readers, you're getting a "special thanks" credit on the title page and 1/25th of all profits."