The 25 Biggest Plays of the Mark Richt Era, #21:
Jasper Sanks's fateful run up the middle. 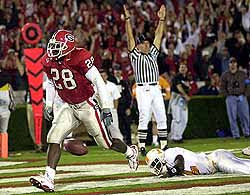 The intended result of Richt's call . . . and now the reality:

For obvious reasons, most of the plays on this list were positive for Georgia. For reasons that should be just as obvious, this one wasn't, but it had just as important an effect on the program and, in particular, its coach as many of the others did.

The situation: Georgia had taken a 14-7 halftime lead over Auburn, only to see it devolve into a 24-17 deficit in the waning minutes of the game. We had plenty of chances, too -- our first drive of the second half ended with an interception in Auburn territory; the next drive ended with a blocked field goal; with two and a half minutes left we got down to the Auburn 9 but couldn't punch it in. Fortunately we held Auburn to a three-and-out on their next drive, so with 70 seconds left and no time-outs, we started from the Auburn 45 for what would hopefully be the tying score.

It was a pretty sweet drive, actually. David Greene scrambled for three yards, then threw a perfect out pattern to Terrence Edwards, who got out of bounds to stop the clock; on the ensuing third-and-1, Jasper Sanks busted off a 13-yard rush. On the next play, Greene pitched a long one to Edwards, who looked like he just might make it, but he was brought down by Donnay Young just short of the goal line.

If memory serves, there were 13 seconds left when first-year head coach Richt made the fateful call: Send Sanks -- who had four rushes for 24 yards up to that point -- up the middle one more time. Whether it was overconfidence in Sanks's ability to punch it in or ignorance of the clock rules that initially inspired this decision, nobody knows, but either way, the light did eventually go on over Richt's head, as he was frantically waving at Greene to spike the ball even as it was being snapped. But Greene took the ball, the handoff to Sanks was made, and Sanks plowed into the line only to get stacked up for no gain. The Dawgs tried frantically to line up for one more shot, but it was too late -- the clock ticked to 00:00 and the Tigers had escaped with a win. I happened to be watching this drama from the very end zone Sanks was trying to barrel into, and . . . to what can I compare that particular sensation? It was like making out with a Victoria's Secret catalogue model, and right as you've both gotten your clothes off, she says, "You know, I've changed my mind" and leaves.

It was easily the most boneheaded coaching decision made by Richt up to that point, and probably still the dumbest thing he's done in his entire tenure at Georgia. But he wasted no time in acknowledging and taking responsibility for the blunder, and if Georgia's ensuing seasons are any indication, he learned from it. Learning experiences like that are important for a rookie head coach, and while it was certainly embarrassing to get punked at the goal line on national TV like that, if that's what it took to mature Richt into a coach who would go on to win 44 games and two SEC titles in his next four years, then it was worth it.

As for Tommy Tuberville, who condescendingly suggested the day after the game that Richt had to learn that "One of the things you've got to do is run the football to be successful in this league," he proceeded to drop his next two games against the Dawgs (and four of the next six), including a 2003 matchup in which he had Ronnie Brown and Cadillac Williams in his backfield in which he only gave them 13 carries combined and ended up losing 26-7. Apparently, Richt actually learned more from the 2001 game than Tubbs did.
Posted by Astronaut Mike Dexter at 8:44 AM

When I saw the headline I immediately thought, "WTF? This makes it in the top 25, but David Greene's magnificent fake doesn't? Is he crazy?"

Then, I read it and realized that you were right. I guess that's why you get the big bucks. That was a painful day, though.

it had to be in there. devastating as it was. What a big WTF moment for him, and the rest of us. Thankfully, he will never make that mistake again... with any luck at all!

I was in that same endzone (closer to the alumni side, maybe 15 rows or so back.)
I remember cheering as Sanks ran and tried to make it...and then I blacked out.
And I hadn't been drinking that day.

When you started this list, my first thought was where in the list this play would fall.

Like you I was at the game and caught up in the great drive. My first reaction when I saw that old-school power running formation was enthusiastically positive. We were going to ram the ball down their throats! Georgia football was back! I even recall that Nathan Huffhines, who knows football ‘real good’ and comprehended the error well before anyone else around us, first shared my jingoistic fervor when he saw that formation. Think about where this play would be in the list had Sanks scored on such an irrationally hard-nosed call. It would have been legendary!

I don’t know about your 'positive learning experience' angle though. Richt continued to make some head-scratching calls in its wake. Yeah we won the next two games, but we would have won that one too with a better play call, so it’s tough to say that the play deserves a ranking based on its instructive value.

In fact, I figure it for a negative learning experience. It’s possible to learn too much from experience: Maybe Richt learned too much from that one. Maybe Richt’s dispassionate sideline manner owed something to fallout from that play call. He took a lot of heat afterwards and perhaps overcompensated, bottling up his emotions too tight. Was The Celebration the explosive release of those emotions? Was Sanks’ run the genesis of Evil Richt?

I certainly think the play deserves a spot on the list. Perhaps even higher on it. That call was in no way good, but it was great. The whole dramatic tragedy of it.

Or maybe he just didn’t understand the rules.

Doug, you keep getting the facts wrong:

Getting the Auburn mascot wrong.

Otherwise, you get an A.

Yuck. I remember exactly where I was when that happened. As soon as they lined up in that running formation I was thinking it could be a wacky FSU-like trick play-action pass or something. But, alas, we gave it to the most under-performing recruit in recent UGA history.

At the end of the first half of the '05 game in Knoxville, we ran a play close to the goal line and had the kicking team ready to run on the field. Result? Coutu for 3 with zeroes on the clock.

This was certainly a learning experience and Richt is better for it.

The sad irony of it, was that Auburn got us back for the time that Goff had his players lay on Auburn to run the clock out about 8-9 years earlier.