Someone's not high on the Hog.

As all the world surely knows, Tim Tebow won the Heisman Trophy with 462 first-place votes. But I found an interesting Web site where one can view the individual ballots of a whole bunch of the voters, and some of them were awfully interesting.

There were the usual homer shenanigans -- a guy from the Topeka newspaper voting Kansas wideout Jordy Nelson #3 and omitting Tebow entirely, a guy from SignOnSanDiego.com voting the QB from D-IAA University of San Diego ahead of Chase Daniel and Colt Brennan -- but I think the thing that actually jumped out at me the most was Steve Spurrier's ballot. He put Tebow #1, to nobody's surprise, but put Colt Brennan #2 and Daniel #3, leaving out Darren McFadden entirely.

Now, Spurrier wasn't the only one to leave McFadden off his ballot -- though those folks were definitely in the minority -- but it was striking considering that if anyone should be able to testify to McFadden's worthiness, it's the Ol' Ballcoach. After all, he did have a front-row seat to McFadden's 321-yard performance in a 48-36 win over his own Gamecocks about a month ago.

I don't know. Maybe Spur Dog only votes for QBs, and was thus unimpressed at McFadden only throwing one pass the entire game. Maybe he's just cranky at being stuck home for the holidays. Either way, though, it sounds like a dick move to me. 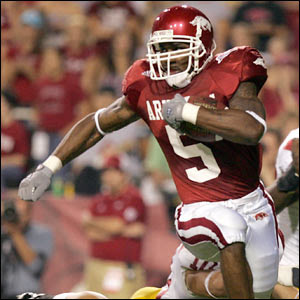 The future #1 draft pick of the Miami Dolphins kindly asks that you raise up off his nuts, Steve.
Posted by Astronaut Mike Dexter at 1:44 PM

Email ThisBlogThis!Share to TwitterShare to FacebookShare to Pinterest
Labels: football, stupidity, teh suxxorz

Don't forget the front row seats that Spurrier had the 2 years prior as well:

Nope, nothing shady there.


In all fairness though, Tebow had SEVEN touchdowns vs the Gamecocks.

Yes, Spurrier's act was graceless. But I just thank God I live in a world where some brave soul with his very own blog had the guts and journo know-how to bring this appalling story to light.

I figure Tebow deserved it; but that said I still can't stand Florida. Now that Georgia and Auburn et al have shown how to beat Florida/Tebow it will be interesting to see if Urban Myer can adjust to win next year.

Why should the worst Heisman pick not named John Huard get to vote?

Which is worse? Spurrier slighting DMac, who gashed USC, or Tubbs slighting Georgia, who destroyed Auburn?

Sour grapes, the both of them.

"Which is worse? Spurrier slighting DMac, who gashed USC, or Tubbs slighting Georgia, who destroyed Auburn?"

Any chance you recall where Richt voted Auburn in 2004, when Auburn went undefeated (as compared to Georgia's two losses this year)?

I agree with Spurrier's Heisman voting almost as much as Hal Mumme's voting Hawaii #1 in the last coaches' poll.
Where the hell is the Coaching Moron Police when you need them?

Here's the worst of it. Check out this article. Spurrier feels badly that McFadden finished 2nd.

Just more proof that the Heisman is just a popularity contest. Anyone who didn't have McFadden/Tebow #1/#2 or #2/#1 shouldn't have a ballot next year. Some of these guys just have no football sense at all.

So when a voter leaves Tebow off his ballot and includes a guy on his home team that no one outside the state has ever heard of, it's "the usual homer shenanigans," but when Spurrier leaves McFadden off his, for the exact same reason, it's a "dick move."

I think I get it.

homer shenanigans = dick move = anyone who left either one off their ballot = shouldn't get a ballot next year....is that too complicated for you too?