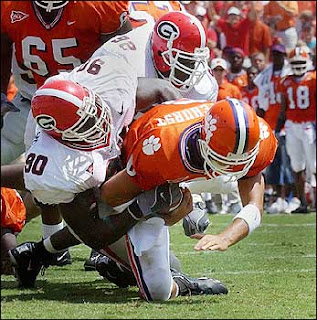 Winning an SEC championship in 2002 was a lot of fun, of course, but everybody was waiting to see how the Bulldogs would follow it up. Our first task of the 2003 season was to go into Death Valley to play a Clemson team that had nearly punked us in the 2002 opener and that was being touted as a possible sleeper team in the ACC. And in addition to all the stars we'd lost to graduation the previous year, we were without defensive end Will Thompson (lost for the year with a knee injury) and eight other players who were suspended for various team rules violations.

Maybe that was the reason the defense only played that much harder. On Clemson's first drive, they stacked the Tigers up at the Georgia 41; second drive, they recovered a Charlie Whitehurst field goal near midfield that the offense turned into a field goal; third drive, a three-and-out; fourth drive, Arnold Harrison forced a fumble that Sean Jones returned inside Clemson's red zone. Down 13-0 just a few minutes into the second quarter, Clemson already looked like they were getting a little desperate.

So maybe that was why Tommy Bowden decided to call a goofy trick play when the Tigers faced fourth-and-2 at the Georgia 4, their deepest penetration of the night: a throwback play by tailback Duane Coleman to the quarterback Whitehurst. It actually wasn't a bad pass, but defensive end Robert Geathers -- ironically, the guy who was filling in for Will Thompson -- jumped at just the right time and batted the ball away. Some Clemson fans howled interference, and there was some contact between Geathers's arm and Whitehurst's, but Geathers was pretty obviously going for the ball and possession went over to Georgia on downs.

Thus what could've been a very dicey shootout for a defensively depleted Georgia squad turned into one of the most emphatic defensive performances by any Bulldog team ever. The Dawgs, who had only been favored by three going into the game, notched their first shutout of Richt's coaching tenure and made a pretty clear statement that they weren't going to pack it in after just one SEC championship.
Posted by Astronaut Mike Dexter at 10:26 AM

That was my favorite season opener I can remember. I just remember the sports analysts saying that we were going to have a really tough time dealing with the crowd, and pretty much anytime after the foiurst 8 minutes you could hear a feather drop on the midfield logo. We really took the wind out of their sails.

Good god, was that game hot. I remember seeing at least 3 or 4 sorority girls have to get crowd-surfed out of their section just so they could get some medical attention.

Shouldn't Thomas Davis' (it was him, wasn't it?) destruction of Whitehurst fill this slot?

That play set the tone.

Pollack's INT to seal the deal was sweet, too. I also recall a 4th down play where Clemson was just trying to get us offsides...Pollack leaned back and put his hands on his hips, openly mocking the Tigers' attempt at shenanigans. Good stuff.

Yeah, it was hotter than heck. I got a sunburn that game that I didn't really lose until the week between the LSU/Alabama games.

Herbie: Two many losses on the offensive and defensive lines for Georgia. The suspensions will hurt them. I like clemson to win by 10 points.

Corso: Yo! That's a good pick and clemson wins this game to set the tone for an ACC championship season for the tigers.

That was my second lesson in not trusting the TV. My first was watching Hannity and Colmes.

Good analysis, but one minor picky correction. Will Thompson was out with an ankle injury.