The 25 Biggest Plays of the Mark Richt Era, #24:
Less than three minutes in, Decory Bryant beats the Razorbacks. 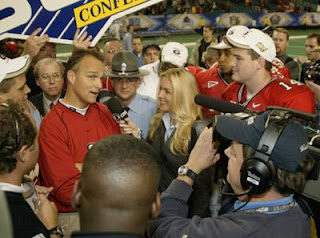 A 4-12 A19 Richie Butler punt BLOCKED, recovered by UGA Thomas Davis at the AR09, Thomas Davis for 7 yards to the AR02 (blocked by Decory Bryant).

Sadly, a lot of people currently remember cornerback Decory Bryant more for the lawsuit he filed against the Georgia athletic department for dropping the ball on his insurance policy right than for his exploits on the field. But those exploits were considerable -- before getting hurt, he was an integral part of a lockdown defense that limited opponents to only 277 total yards a game on the way to 11-3 and an SEC East title in 2003. And he made the play that permanently shifted the momentum of the SEC championship game in 2002 -- well, as much as you can shift momentum when you haven't even been playing three minutes yet.

Arkansas got the ball first in the 2002 title game, and after a four-yard rush by Matt Jones, an incomplete pass, and a six-yard sack by Boss Bailey, they were facing 4th-and-12 at their own 19. So it was a pretty great defensive series already, but it was about to get better. On the next play, as the Razorbacks snapped the ball back to punter Richie Butler, Bryant flew completely untouched around the right side of the Arkansas line and knocked the ball right off the end of Butler's foot. I was watching the game with a bunch of fellow Dawgs at my friend Kristen's apartment in Midtown, and we were jumping around like hyperactive five-year-olds on the jungle gym after Bryant's block. I was almost a little worried that we'd done lasting structural damage to the place.

Thomas Davis picked the ball up and took it down to the two, and one play later Musa Smith went in for the first six points of the game. By the end of the first quarter, the Dawgs led 17-0; at halftime, they were ahead 23-0; and by the time the clock hit 00:00, they had won their first SEC title in 20 years (and notched the second-biggest blowout ever in an SEC championship game). It was a beautiful night all around, and it started with Decory's big play. If anyone has any info on what he's doing now, let me know -- he had a promising NFL career ahead of him before he got hurt, and all acrimony with the athletic department aside, I hope he's doing well.
Posted by Astronaut Mike Dexter at 9:30 AM

The last I've seen mentioned about Bryant is here: http://www.dailyreportonline.com/Editorial/News/new_singleEdit.asp?individual_SQL=11%2F16%2F2007%4017900%5FPublic%5F%2Ehtm

'Anonymous' is right about Jones . . . I thought the roof was going to come off the Dome it was so loud when that punt was blocked. It might have been the earliest ever that an SECCG was 'over.'

Arkansas was baaaaaad. '07 UT has been fairly called the worst team ever to make the SECCG, but '02 Arky was probably worse.

I remember watching Nutt run 4'11", 95 pound Fred Talley up the middle over and over and over in that game, like if he kept doing it for 14 quarters it might finally work.

I think 04 UT was worse than 07 UT. 04 UT lost to Notre Dame, at home, in a year that the Irish fired their coach. They barely held on against both Vandy and UK (in years when those teams really were terrible) to finish the conference schedule.

Even their win in Athens was underwhelming. This is the ONLY game I say this about, but UGA lost that game more than UT won it. Mind-numbing pnealties (false starts that killed drives, not to mention a block in the back on a kickoff return at the very end of the first half where we took it all the way to the UT 2 but then had to come all the way back and take a knee to finish out the half.) David Green hit that shotgun play action thing we do to Reggie Brown but was a split second too slow getting the throw off, and Reggie couldn't get his foot in bounds.

Meanwhile, UT 'worked us over' for a mighty 19 points.

Also don't forget how that UT team had that win over Florida when Dallas Green had that personal foul that put UT in range for the final field goal. They got beaten down by Auburn twice (no shame in that, I suppose), but barely held on to beat Ole Miss, Vandy, and UK. And, again, they lost to a mediocre Notre Dame team.

UT's 2007 D was far worse than any other team that made the SECCG. But the O, with Ainge running things was very good.

UT 2004 had an average at best offense and a maybe slightly better than average defense.

I worked with Decory after the injury and just before the lawsuit, but that was a few years ago. He was basically just working part time and quit right when the lawsuit was getting cranked up. I saw him in a bar in Athens about a year ago, but unfortunately don't remember any particulars.