The 25 Biggest Plays of the Mark Richt Era, #13:
Tim Wansley smashes the streak. 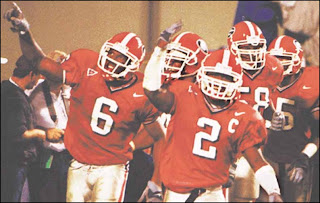 Years from now, I'm going to be sitting around the fire with my grandkids after a hearty Thanksgiving dinner, and I'm going to tell them a story. "You know, kids, a long time ago, back before any of you were born, even before your granny Melissa and I got married, Georgia Tech was actually better than Georgia for a little while. It's true!" I'll tell them, as their eyes grow wide and they whisper "No way" in disbelief. "Three years in a row, starting with my senior year at UGA, they actually beat us. Now, the first two times the refs basically handed the game to Tech -- I guess they felt sorry for them or something -- but the third time they put a bunch of ineligible athletes on the field and just straight-up whupped us. Back in 2001, Georgia Tech actually went into the season as a possible sleeper pick for the national-championship game, and Georgia wasn't even ranked! Now, can you believe that?

"Anyway, Tech pissed that away in a hurry -- whoops, your mom's not listening, is she? -- 'cause they lost to Clemson and Maryland early in the season, and then they lost to a lousy Virginia team on this crazy hook-and-ladder play at the very end of the game. But they were still ranked in the top 25 toward the end of the season and were favored over us by about a field goal or so when we went in to play them the Saturday after Thanksgiving. You know that coach Mark Richt I always talk about -- the one whose picture we have up over the mantle? That's right, Mary Ann, the one I named your daddy after! Well, that was his very first year as coach. He'd struggled a little bit here and there, but we knew he was gonna turn out to be something special.

"Anyway, he did a good job in that game -- Tech had this supposedly fantastic offense that we held to just 118 yards in the first half, and meanwhile, we were moving the ball pretty well. Only problem was, we couldn't get it into the end zone. Billy Bennett kicked five field goals before we finally got a touchdown toward the end of the third quarter. So after all that, we were still only ahead by four points. On our next drive we got down to the Tech 34 but couldn't get a first down, so we had to punt. Your ol' granddad was pretty nervous, because there was still plenty of time for Tech to come back.

"Tech ran two plays and ended up with a third-and-3 from their own 27. On their next play, Godsey dropped back and threw kind of a wobbly pass into the right flat, and guess what happened? Tim Wansley, our senior cornerback, jumped right in front of that pass, picked it off, and ran it right back into the end zone without even being touched. It was beautiful, and you've never heard your granddad holler so -- what's that, Champ? Yup, somebody did something completely stupid in a Georgia Tech game and it wasn't Reggie Ball! I know! That's weird, isn't it? But that game was before Reggie Ball even went to Georgia Tech.

"Anyway, that was pretty much that. Tech fumbled on their next drive, and Billy Bennett kicked another field goal, and Tech didn't score again for the rest of the game. We had broken that losing streak to Tech, and it was Tim Wansley's interception that closed the door on them.

"And Tech never beat Georgia again. The end."
Posted by Astronaut Mike Dexter at 7:52 AM

Email ThisBlogThis!Share to TwitterShare to FacebookShare to Pinterest
Labels: 25 biggest plays of the Mark Richt era, football, georgia bulldogs, gettin' my gloat on

For the record, the SI.com cheerleader curse struck again at MSG last night. Don't know why we're the only ones wise to it... it's like clockwork at this point.