A memo from the desk of Arnold T. Pants, Esq.:
People without maps, orange outfits, busted Trojans, and other profiles in FAIL.

• The Sarah Palin bandwagon is beginning to unload, as right-wing columnist Kathleen Parker comes forward to say Palin should step down from the ticket. Well, there are plenty of equally qualified replacements out there . . . how does McCain/Upton '08 sound?

I guess I shouldn't make fun, though, since John McCain has already won tonight's debate.

• Apropos of nothing, a writer for knoxnews.com in Knoxville, Tennessee, read some comment I made on this blog about Tennessee fans' tacky gameday attire and was actually inspired to solicit my opinion for an article he was writing on that very subject. I think it says something about Volunteer Nation's current mental state that they didn't immediately fill up the comments thread with angry questions about why anyone would solicit some pansy-ass Georgia fan's opinion on Tennessee's fashion sense; the first comment ("fitting, considering our team plays a relaxed style of football") pretty much sets the tone.

What this means for Georgia? Precisely dick, thanks for asking, since UT fans were (if memory serves) just as demoralized about this time last year right up until the Dawgs strolled into Neyland Stadium and got Keyser Söze'd by the eventual SEC East champs. (Keenan Ivory Wayans pops his head in through the window: "Message!")

• In other adventures in cross-promotion, my Dr. Saturday picks column is up. Trying for a perfect 4-0 after a pretty nice 3-1 record last week.

• In the Georgia preview I did for Deadspin over the summer, I made reference to the informal headline contests we'd have back in college whenever the Dawgs beat up on the 'Cocks of South Carolina. Well, the headline possibilities are certainly just as boundless whenever the Beavers face the Trojans, and even more so when the Beavers come out with a shocking upset win. ESPN's own headline ranks pretty high on the Unintentional Hilarity-O-Meter, but something like this calls for a little intentional hilarity as well, so . . . take it away, Holly: 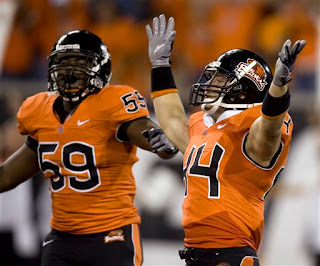 Trojans Can’t Pull It Out

Trojans Can’t Get It Up For Big Night With Beavers

I would say "It gets even more out of hand in the comments," but that would imply that it was ever in hand to begin with. My personal contribution, "Trojans Break Under Pressure of Too Much Jacquizz," pays tribute to freshman RB Jacquizz Rodgers's 186-yard, two-TD performance; I welcome your suggestions in the comments.

This is as good a time as any to reiterate my support for a home-and-home between South Carolina and Oregon State. Intersectional Game of the Century? I don't think that's too much premature exaggeration, no.

• And finally, the 17 All-Time Worst "ESPN Gameday" signs. I actually thought the Goulet one was kind of funny.
Posted by Astronaut Mike Dexter at 5:16 PM

Email ThisBlogThis!Share to TwitterShare to FacebookShare to Pinterest
Labels: blogs that are better than mine, embedded video, gettin' my gloat on, hot chicks, Mystery Meat, politics, self-aggrandizement, teh suxxorz, the 2008 election

The Goulet one is awesome. What the hell.

As much as want UGA fans to stay classy for the Gameday cameras, I still think it would be hilarious if someone could sneak in a "LEE CORSO IS STILL A PENIS" sign.

What if every school GameDay visits took it on in turn to keep that particular tradition alive? Do it up like movie sequels:

Thanks so much for the Beaver/Trojan headlines - I needed that.

At the risk of being a total suck-up, the Goulet sign is hilarious. The young woman with the 757 area code sign might be dehydrated and not thinking straight.

I don't understand why people object to the Lee Corso signs - it's not libel if it's true.

Did Biden start unloading his own bandwagon? Did he not say that Hillary was a better pick for VP?

And to think you were going to make toast Sunday morning for breakfast.

Vanderbilt sits alone atop the SEC East rankings... Pretty sure this means the 7th seal has been opened...