Here be the first in a weekly series of poll ballots -- one for the BlogPoll hosted by the estimable Brian Cook of MGoBlog, the second for the SEC Power Poll created by Garnet and Black Attack. Neither one should be considered set in stone by any stretch -- you are invited to praise, denigrate, or otherwise hash out any of these picks in the comments threads, and assuming that your points jibe with my preconceived opinions offer some new insights I hadn't considered, I'll make changes as necessary. 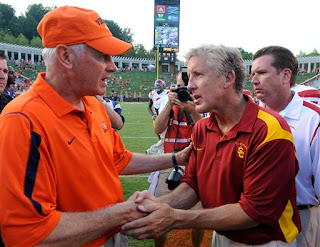 "Boy, that Pete Carroll is a nice guy. I almost enjoyed getting 52 points dropped on me in my own stadium."

• Moving Southern Cal up to #3 -- which bumps Georgia down a notch despite their opening-day win -- will probably make me about as popular as Michael Fitzpatrick (or the coaches' poll) at the moment, but I feel like USC was deserving of the extra consideration, given that they emphatically answered my biggest question about the team (where's your offense gonna come from?) 3,000 miles away from home against a defense that was supposed to at least have a pulse. And yeah, I'd be lying if I said Jeff Owens's injury didn't make me feel a little bit more justified in bumping the Dawgs out of the #3 spot, but given our established depth on defense I'm cautiously optimistic about the guys lined up to replace him.

• Mizzou gets kicked down five notches after going up against an offense Juice Williams had to carry and handing them 42 points anyway; Wisconsin drops seven spots because . . . well, not really because of anything they did, I just thought there were a number of other teams that had opening-day performances that were far more impressive.

• None more so than Alabama, whom I don't even think I mentioned in the "waiting room" category in the preseason; their performance was arguably the best of any team in the country relative to expectations this past weekend. More impressive than that of Auburn, whom I was kind of sketchy on to begin with at #12 and who didn't instill a lot of confidence that they've got Tony Franklin's spread offense down pat.

• Other newcomers: South Carolina, who overcame a sleepy start to pummel N.C. State on Thursday; Cincinnati, who was just outside the Top 25 in my preseason ballot; and UCLA, about whom, if Karl Dorrell were still the coach, I'd be saying "Whatever, watch them get crushed in their next three games" right about now but whose Neuheisel-licious leadership at the top instead makes me a teeny bit more confident that they'll actually display some consistency this year.

• The biggest pipe-taker of the week, not surprisingly, is former #17 Clemson, who wakes up in an unfamiliar bed, asks Alabama if they can borrow a T-shirt, and takes the Walk of Shame right out of the top 25. Virginia Tech and Tennessee, no soup for you either. Boise State's former #25 spot gets swiped by the Bruins, but they're poised right outside the rankings, hand stamped for a quick re-entry if they dispense with Bowling Green this week.

• Does East Carolina merit attention as a Top 25er, given that they beat a team I'd put at #21 in the preseason? Maybe I'm just devaluing their win as a result of the entire ACC looking awful last week, but their big upset aside, I can't quite put them above the UCLAs or Cincinnatis of the world just yet.

And now for the SEC Power Poll ballot, which, again, will be hung out there every week for your criticism, conjecture, and derision: 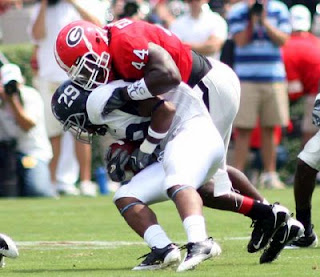 1. Georgia -- The final score against Southern wasn't anything to get excited about, but Mark Richt treated this like an NFL preseason game, subbing in second-stringers early and giving liberal on-the-field time to a whole bunch of different players. One need only look to Jeff Owens's injury to see why developing that kind of depth is important. His loss doesn't necessarily kill Georgia's title hopes, but man, I'd sure be happier right now if he wasn't on crutches.

2. Florida -- Hard to learn a lot from a performance in which a +6 turnover margin allows you to roll up 56 points on "only" 406 yards (a lower output than all but four of their games last year). On the other hand, it bodes well for the Gators' efforts to break their Tebow/Harvin dependency when they can roll up that kind of score in a game where Tebow only accounted for 174 yards and Harvin didn't play at all.

3. LSU -- We're the SEC; our name-brand teams don't lose to D-IAAs. That's about all you can take from the Tigers' pounding of App State, but as long as it allows me to still make fun of the Big Ten, I'll take it.

4. Alabama -- The glass-half-empty parade douser in me has a sneaking suspicion that the Tide's opening win won't look quite as impressive by season's end, as pundits stand around scratching their heads and asking, "What on earth made us think Clemson was a top-10 team?" -- but still, what a show by the Tide, particularly since their best performances were put forth by the two units (QB and front seven) that seemed to be the biggest question marks coming into this season. And while offensive coordinator Jim McElwain was far less heralded than his counterparts at Auburn and Tennessee, he easily called the best game of the three, getting a handle on John Parker Wilson's strengths early and giving him the plays he needed to get into a rhythm we haven't often seen in the past.

5. Auburn -- And this is why we don't make sweeping judgments based on single bowl games, kids. Tony Franklin's "Spread Eagle" offense, which looked pretty solid beating Clemson in last year's Peach Bowl, sputtered in its debut in full assemblage against lowly UL-Monroe; looks like Tuberville might actually have to fall back on a power running game and killer defense until all the kinks get worked out. And it's not like he has any experience with that, right?

6. South Carolina -- God almighty, that was a boring-ass game against N.C. State on Thursday. Probably less boring for Gamecock fans, though, now that they appear to have found a QB, Chris Smelley, capable of completing passes to the right team (though it helped that N.C. State's defense just gave up entirely once they were down by two TDs). If Spurrier has found even a modicum of offensive production to go along with his defense, the rest of the SEC East needs to watch out.

7. Tennessee -- After coming up empty in their attempts to roll with the Neu out in Los Angeles on Monday night, the Vols have a whole lot of questions to answer on the long plane ride home. The most pressing: How is Jonathan Crompton getting so much pressure when his O-line returns all five guys from a unit that allowed only four sacks all of last year? Which is the real Vol defense: the one that made Kevin Craft look like Michael Henig in the first half, or the one that allowed him to turn into Troy Aikman in the second? And finally, can we please stop playing games in the Pacific Time Zone?

8. Ole Miss -- Holy smokes, the Rebels have re-learned how to put points on the board. Jevan Snead didn't look spectacular in his debut in an Ole Miss uniform, but he got the job done, and he stands to improve as the season wears on. Looks like those who were hoping for a bowl in Nutt's first year in Oxford might get their wish.

9. Kentucky -- After years of Wildcat teams that could ring up bushel baskets of points but were incapable of stopping anybody, it's going to be weird watching them struggle on offense but crush people on defense this year. Is that going to be enough to get them back into a bowl? Against their schedule, it might be.

10. Vanderbilt -- Don't underestimate what it meant for Vandy to go on the road and handle a Miami-Ohio team gunning for a league title this year. If that's the kind of offensive production Bobby Johnson can ring up with only three returning starters on that side of the ball, perhaps I was too hasty in putting him at the bottom of my SEC coach rankings.

11. Mississippi State -- Just as Alabama's win over Clemson may look a little less awesome by season's end, State's loss to LaTech might look a little less embarrassing come December. Still, 14 measly points against a WAC defense indicates that Sylvester Croom's seemingly never-ending quest to find this team an offense has not made a lot of progress.

12. Arkansas -- Even in this post-Appalachian State age, a good BCS-conference team should not need two touchdowns in the last eight minutes of the game to get by a D-IAA opponent at home. From this we can conclude that Arkansas is not a good BCS-conference team. Seventy-six total rushing yards against Western Illinois? Darren McFadden usually rang that up in the first quarter, and it looks like Bobby Petrino is going to be missing him and Felix Jones even worse than anyone thought, even if Petrino does succeed in turning Casey Dick into Colt Brennan.
Posted by Astronaut Mike Dexter at 2:23 PM

Email ThisBlogThis!Share to TwitterShare to FacebookShare to Pinterest
Labels: Blogpoll, blogs that are better than mine, football, georgia bulldogs

Hmmm...I'm not sure about UCLA at #25. Sure, they won, but it seemed more to do with Tennessee having a dodgy QB, idiotic OC whose play selection was putrid, terrible special teams, and a defense that seemed incapable of making adjustments.

Honestly, that thought occurred to me too, and some guys on the local sports-talk station yesterday were incredulous that UCLA had made the top 25 in the "official" polls -- but the Bruins have a great defense and a pretty savvy coach, and my thinking is that if Kevin Craft is actually the QB we saw in the second half as opposed to the one we saw in the first, they could actually win some games. Of course, this just means they'll go out and lose to BYU 52-17 in a couple weeks.

Whoa.....hold on a second. You think South Cackalacky is good? Smelley Cock is the same QB that couldn't take the starting QB job away from Blake "Fist-o-cuffs" Mitchell. Mike Davis looked horrific against a horrific defense. He looked fat and slow, probably because he is fat and slow. NC State actually had more rushing yards than USC against that world-beating, Black Magic defense. I'm not sold. I'm thinking 7-5 (hopefully one of those against Clempsun), but then again, I could be an enormous idiot.

No, anonymous . . . clearly, after last night, the enormous idiot is me.

Hunker down, you hairy Commodores.