A memo from the desk of Arnold T. Pants, Esq.:
Stuff to do in between chugging entire bottles of water. 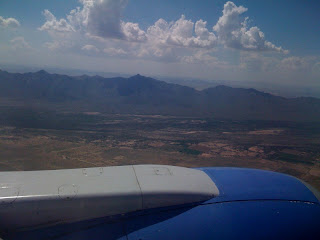 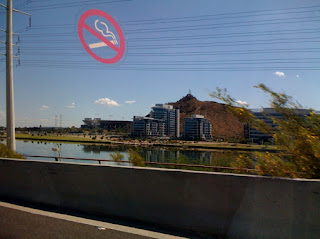 · I'm on the surface of the moon! Oh, no wait, I'm actually in Arizona, it just looks like the surface of the moon because it's really flat except for a few mountains popping up in the middle of nowhere and NO GRASS ANYWHERE. It's cool, though -- as long as Georgia wins Saturday and I get my picture taken with a fricking 20-foot-tall cactus, it's all good. We've got Wi-Fi in the phat-ass house the Tent City crew rented for the weekend, so I'm sure I'll be able to regale y'all with many fantabulous stories of me doing stuff like shouting "LOOK AT ME, Y'ALL! WITH MY ARMS STRETCHED OUT AND BENT LIKE THIS, I LOOK JUST LIKE THIS CACTUS!!11!1!!11!" as the locals roll their eyes and mutter, "Congratulations, Einstein, you're only the ten MILLIONTH tourist to have done that since you got here." I guess it's like walking barefoot across Abbey Road in London -- you think you're the first person to have ever thought of that, until you turn around and there are 10 people right after you doing the exact same thing.

· Now, if you're on your way to Tempe but you're still waiting around in some anonymous airport looking for something to do, you could always amuse yourself with the Sarah Palin baby name generator. In case you were curious, my name, if I were a Palin, would be Grill Igloo . . . and for perhaps the first time ever I'm actually thankful for the name Gillett.

· Sarah Palin didn't actually say "Thanks but no thanks" to the Bridge To Nowhere, but Barack Obama has indeed said "Thanks but no thanks" to Lindsay Lohan's offer to be a representative of his campaign . . . and my respect for the man continues to grow. If only John McCain had said the same thing when he got the all-important endorsement from Heidi Montag, but what's done is done, I guess. 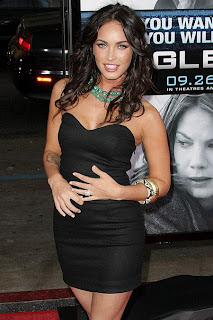 · As for women I WOULD like my political campaign to be associated with, "Transformers" star Megan Fox once carried on a relationship with a Russian stripper. I'm sorry, I'm going to need a minute, it seems that all the blood in my body has gone from one place to . . . uh, another place.

· This week's picks column is up at Dr. Saturday, and unfortunately, after going 1-2-1 last week, Lou Holtz will no longer be dishing out his fantastic advice and trenchant insights -- the onus is back on me now, and not only do I have to make the picks, I have to declare what I'd be willing to bet on that outcome and if I lose, Rivals.com invoices me for that amount. So needless to say, I'll be treading lightly for the first few weeks (but apparently not so lightly that I'm not betting Urban Meyer's daughter's SUV on the outcome of Florida-Tennessee).

· On the subject of UF-UT, Every Day Should Be Saturday's Orson Swindle sums up the reasons why everyone should resent Tennessee's existence (the state, not just the university) in a glorious hategasm of contempt. It's truly beautiful, and 100-percent on-the-mark accurate.

· Elsewhere in the SEC, a co-worker of mine -- an Auburn fan, mind -- sent me the following photo. In the wake of Auburn's scintillating 3-2 victory over Mississippi State last week, the Tigers have apparently elected to turn the lemons of offensive misery into the sweet, refreshing lemonade of cross-promotional marketing. 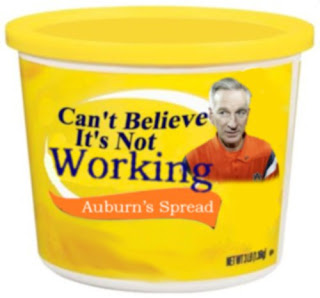 · Finally, if you're STILL waiting for that plane to leave, here's the second-funniest video I've seen all week (after the Tina-Fey-as-Sarah-Palin tour de force from earlier) -- "The Waldo Ultimatum."

Email ThisBlogThis!Share to TwitterShare to FacebookShare to Pinterest
Labels: blogs that are better than mine, embedded video, football, hot chicks, my sordid personal affairs, teh suxxorz, w00t obama

Doug - please take plenty of photos of mill avenue (tailgating scene) and all of Dawgnation.
Apparently - there will be close to 20,000 UGA fans there.

Only downside to Ms. Fox is a big one: you'd be getting David Silver's sloppy seconds.

Not quite as bad as the sloppy seconds from one of the two Coreys, but still...

DG- There's a 30 foot cactus next to the Waffle House sign on I-10 & Baseline Road, where we ate last night. Amazing how appealing WH is when you haven't even seen the yellow sign in almost 4 years...