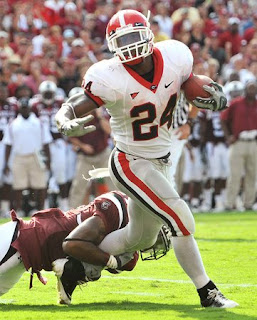 I said in the preview on Wednesday that this game was probably going to look a lot like 2005, but as it turns out, I didn't go back far enough. It looked more like 2002: two teams clobbering the hell out of each other with defense for 60 minutes, with the resulting low-scoring game turning on a couple of turnovers so fortuitously timed you kind of had to wonder whether Evil Richt hadn't gone all in and struck a deal with the devil himself. The offenses, meanwhile, seemed to be mentally standing on the sidelines even when they were on the field, looking around nervously at one another and playing a game of Fuck-Up Chicken to see who could screw up the most without actually giving the game away.

Spurrier, needless to say, lost that game, and he lost it on the tricky play, the gimmick that Gary Danielson had been warning us of for nearly the entire second half: Waning moments of the game, Gamecock drive has stalled just outside the Georgia 30 after Georgia's secondary managed two of their only effective fourth-quarter coverages that didn't involve a tear-your-hair-out-at-the-roots PI penalty. Looking for the home-run play on fourth-and-two, Spurrier took the cellophane off C.C. Whitlock, the blue-chip freshman who'd headlined his 2008 recruiting class, and stationed him wide to the right. But Whitlock, faced with the enormity of his first actual play as a Gamecock, got crossed up in Georgia's coverage and broke off his wheel route before the wheel had even started turning, and Chris Smelley's pass sailed, Reggie Ball-like, toward nobody in particular. Carolina did get the ball back two minutes later with one last chance to win the game, but the blown Whitlock play was an eloquent symbol of Spurrier's tenure thus far in Columbia: That out-of-nowhere top-secret play Georgia fans had been steeling themselves for the entire game, the ace in the hole Spurrier had used so effectively to stomp on many a neck when he was with the Gators, turned out to be his too-cute undoing. Spurrier clenched his fist, cocked back, and ended up suckerpunching himself. 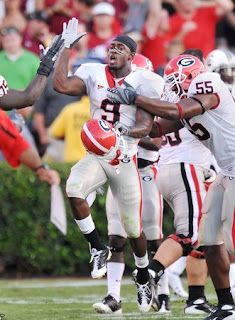 Should the #2 team in the country have to depend on opponents' snafus like this one to win a game? My immediate answer is "I sure as hell hope not," but the fact is, sometimes they do. LSU needed a John Parker Wilson fumble in the shadow of his own goalposts to avoid overtime against Alabama last year. Florida needed their own desperate escape from South Carolina the year before that. And hell, just look back at that Georgia-South Carolina game from 2002: We were walking a tightrope for that entire game that was arguably much thinner than this past Saturday's, and yet in spite of all the minor miracles (and one major one, I guess) needed to win that one, a couple gimmes and a "man enough" challenge later we were rocking our way toward a 13-1 record and our first SEC title in 20 years.

None of this is to say that Georgia should be looking back on this game with too big a grin, even if it's only in relief. I'm not happy that our defense nearly let Chris Smelley look like a hero; Smelley did get 166 of his 271 yards in the fourth quarter, so maybe that was just Willie Martinez's idea of a prevent, but when your opponent only has a few minutes to go the length of the field and you know they can't run the ball for shit anyway, you should probably be able to defend the pass with something other than a PI penalty. We're not dropping passes at the rate we did in 2006, but we're still dropping too many, with Tripp Chandler once again being the goat of the game in that regard. Our kickoffs still aren't landing anywhere near the end zone. And we can't be giving up 112 yards in penalties in a game where we only roll up 252 yards of offense, period. I haven't gotten around to my usual fine-toothed combing of the play-by-play-summary just yet, but I'm fully expecting to find that between dropped passes, drive-killing penalties and miscellaneous brain flatulence, we chucked about 20 points into the dustbin in Columbia; for all their sloppiness at times, say a prayer of thanks to the defense that we didn't end up needing them.

But in close to a decade and a half as an obsessive-compulsive Georgia fan, I've seen my share of mash-the-panic-button-as-hard-as-you-can wins, and trust me, this wasn't one. (You want to see real cause for panic, check out what Arizona State did against UNLV in Tempe Saturday night. Looks like you busted out those "Bring On Georgia" signs a wee bit early, schmucks.) Our win over Cackalacky was ugly, to be sure, but I give credit to the team for having the heart to gut out a win in a knock-down drag-out street fight, and if Mark Richt and the coaching staff have truly made the strides they appeared to have made midway through 2007, they should be able to use this game effectively as a wake-up call: Welcome to life as a presumptive national-title contender, boys. Hope you didn't think they were all going to step out of the way as politely as Central Michigan did. We're going to work some shit out, we're going to run some stadium steps -- OK, probably a lot of stadium steps -- and if we fly home from Arizona 4-0, nobody's going to be worrying too much about what happened or didn't happen against the 'Cocks. 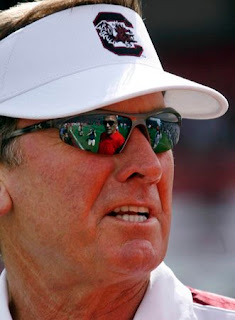 "The hell with this. Where's my driver?"

As for Spurrier, have some sympathy for him -- the karmic sting of losing five straight to Eastern Division opponents has to sting like a mother. So I propose that, as Dawg fans, we all take a step back and treat him with as much respect as possible during this difficult time.

No, no, it's really the least we can do.

Other thoughts I had on Saturday in between coronary events:

· I was as stunned as anyone to see how deftly USC picked apart Ohio State's supposedly awesome defense, but as far as the Pac-10 as a whole is concerned, that win was like a BMW 6-series parked out in front of a doublewide -- the conference went 3-7 this past weekend, and it was even uglier than the record indicates. (Cal getting bonked by a Maryland team that just lost to MTSU? Arizona State losing at home to UNLV? UCLA losing 59-0 to anybody?) They looked every bit as bad this past Saturday as the ACC looked in week 1, and I didn't just make that comparison at random, either, since it looks like the Pac-10 has officially become the new version of what the ACC was for nearly the entirety of the 1990s, with Southern Cal playing the part of the Florida State squad that the rest of the league had no business even being on the same field with. The Southeastern Conference certainly played some cover-your-eyes games on Saturday themselves, but I'll hear no more of this nonsense about how the Pac-10 is as top-to-bottom deep as the SEC, thanks. 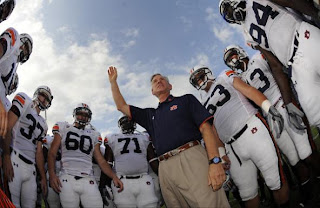 "I predict our two teams will combine for . . . THIS many points."

· And admit it, Rest of the Country -- even when the SEC is sucking out loud, you can't turn away. At least, the participants in Dr. Saturday's USC-tOSU liveblog couldn't, as they abandoned the Trobuckalypse in droves to witness MULE AGAINST MULE IN AN ALL-OUT BATTLE FOR TURNIP SUPREMACY!!1!111! down in Starkville. There's no possible way I can do Auburn-MSU '08 justice; you're just going to have to hope you can catch a replay on cable somewhere. But it probably says something that the sideline cameras caught both Sylvester Croom and Tommy Tuberville smiling to themselves at various points in the fourth quarter, as if they'd made it through the Denial, Bargaining, Anger, and Depression stages of The Death of Offensive Football and were enjoying the Yakety-Sax-serenaded throes of Acceptance. More entertaining than Trojans-Buckeyes? Oh, yes, by light-years. You know it, I know it, and the American people know it.

· UAB Blazers watch: Gimme a f$#@in' siren -- the Blazers held an opponent below 40 points for the first time all year! Take a bow, Tennessee. And bring on Alabama State!

· Wofford Terriers watch: Nothing this week, as the Terriers take a breather before heading into Columbia this coming Saturday to take on the Gamecocks. I'll be a little embarrassed if Wofford ends up looking better than Georgia did against USC, but I concede that it's a possibility. 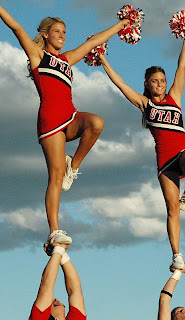 · Cheerleader Curse Watch: It might be time to retire the Cheerleader Curse, as the curse wasn't anywhere near enough to lift hapless Utah state over Utah, alma mater of cheerleader Mindi (above). That aside, though, SI.com has featured Arizona State cheerleaders four times in the last 12 months; will that be enough to doom the Sun Devils this coming weekend, or should we ask them to do one more, just to be on the safe side?
Posted by Astronaut Mike Dexter at 11:26 AM

The better question to ask is 'exactly how did Tennessee lose to a UCLA team that was down 42-0 to BYU at halftime?'

As for the rest the Pac-10, just wretched with the possible exception of Oregon. And even Oregon won't be the same team now that they've lost QB Justin Roeper for 2-4 weeks.

It pains me to say this but after watching the Pac-10 conference go 0-4 vs the Mountain West this weekend, sans USC and perhaps Oregon, the MWC is better than the Pac-10. To be honest I'm not surprised at some of the losses. Kal is notorious for going on the road and flopping in big games. The Arizona and ASU losses however, were just inexcusable.

"There's no possible way I can do Auburn-MSU '08 justice; you're just going to have to hope you can catch a replay on cable somewhere. But it probably says something that the sideline cameras caught both Sylvester Croom and Tommy Tuberville smiling to themselves at various points in the fourth quarter, as if they'd made it through the Denial, Bargaining, Anger, and Depression stages of The Death of Offensive Football and were enjoying the Yakety-Sax-serenaded throes of Acceptance."

Shit, if that sentence alone doesn't win you somethng this year, you were robbed.

That MSU/Auburn game goes into the folder with the Steelers game from a year ago with the punts that stuck in the mud-hole that was the Steelers stadium like lawn darts. That was an offensive clusterfuck like few have matched until this game yesterday. 3-0 in the NFL meets 3-2 in the SEC. Woo?

First off, let me eat a little crow: my comment in your preview post was obviously completely wrong. Everyone kept telling me "But South Carolina always plays us tough" and I scoffed ... but they were right and I wasn't.

But last year, we lost this game. This year, we won. That's my spin and I'm sticking to it.

But Dear Willie Martinez, please see a psychiatrist this week to get over your blitz-phobia. Yeah, I know ... you'd LIKE to get pressure with your front four (I'd like it too) but if you can't, it's OK to blitz. Call up John Tenuta, he'll back me up on this.