The Friday Random Ten+5 ponders life in colors other than red and black.

You know, I like to rag on Alabama's intermittently delusional fan base as anyone else, but deep down I've got a fair amount of respect for those guys, maybe even a little envy. Would I like to have 12 national titles (or 15, or 137, or however many they're claiming) under my alma mater's belt? Hells yes I would. Would I be just as smug about it? I'd be more smug. I'd probably be the kind of guy who shells out $50 for an Auburn University vanity plate, just so that I could order the word "SUCKS" next to the AU logo. I don't think I'd necessarily become this guy, but only because I don't really like different colors in my tattoos.

And this isn't just me talking out of my ass, either, because I seem to recall a time very early on in my college search when I entertained, however casually, the thought of becoming an Alabama student. I didn't end up applying there, but I did apply to a whole bunch of places other than Georgia, meaning my life could've gone spiraling off in a whole host of different directions. Would they have been as good as the one I ended up taking? I don't know, but there's no harm in taking a look inside Dr. Hubert Farnsworth's What-If Machine and find out. This week's +5 is Five Other Universities I Applied To And How Things Would Be Different If I'd Gone There: 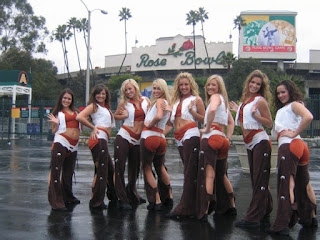 Texas
Pros: I'd get to flaunt my "2005 National Champions" T-shirt around ghey-ass Aggie fans. Would probably know enough townies that I'd always have a place to stay at South By Southwest. Would get to claim Nanci Griffith, Chris Ware, and Richard Linklater as fellow alums.
Cons: Long way from home, kemosabe. Annual terror of the Red River Rivalry no less spirit-destroying than that of the World's Largest Outdoor Cocktail Party. Having to field the "Didn't Jenna Bush go to your school?" question at least once a week. Running into Matthew McConaughey at ballgames. 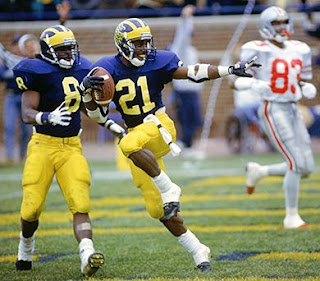 Michigan
Pros: We would've won a national title while I was in school. Getting to brag "Biggest stadium in the country, bitches." Might have become best friends with Brian Cook, perhaps to the extent that I might even get two votes in the BlogPoll. Might be working in Chicago right now.
Cons: Also a long way from home. Colder weather = more bundled-up chicks, which is not cool. Lots of noon kickoffs when your stadium doesn't have any freakin' lights. Lingering shame of the Appalachian State game would counteract a lot of the "'97 National Champs" braggery. 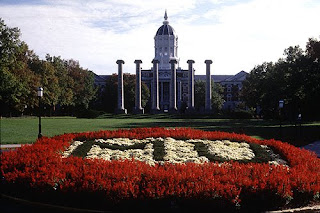 Missouri
Pros: It's one of the few journalism schools in the country ranked higher than Georgia's. Could've told people I was related to whomever Gillett Hall was named after and gotten special treatment for four years. Would have reasonable hope right now of not only a national title but also a Heisman for Chase Daniel.
Cons: Kind of out in the middle of nowhere. Football team would've gone 23-23 in the time I was there. Going to the top-ranked public journalism school would mean that I probably would've put more pressure on myself to stay in the field for the duration of my career, meaning I'd probably be hating life right now even more than I already do. 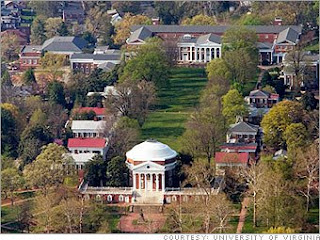 Virginia
Pros: An incredibly prestigious "public Ivy" with tons of heritage. Might've gotten to live on The Lawn. Would share an alma mater with countless U.S. statesmen, three Supreme Court justices, and Tina Fey. Would have an additional avenue for bonding with my two UVA-alum parents.
Cons: "Bonding" these days would mainly involve commiseration over the godawful state of the Cavalier football program (which includes being an underdog to Duke this weekend). The ongoing guilt of knowing I only got in because I was a legacy. Annual soul-eviscerating phone calls from my asshole relatives who went to Virginia Tech the Saturday after Thanksgiving. 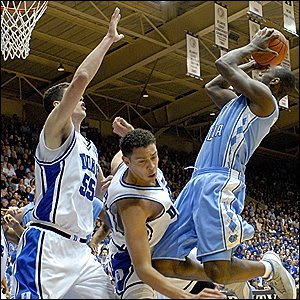 North Carolina (where I, like every other applicant from outside the state, was rejected)
Pros: The glorious affirmation of being the one non-North Carolina resident chosen for acceptance that year. Would get to share alumni status with Lewis Black, Russell Banks, Andy Griffith, and Fox News hottie Laurie Dhue. Would've been around for that one awesome season under Mack Brown where the Tarheels went 11-1 and kicked Virginia Tech's ass in the Gator Bowl.
Cons: The seething resentment of all the other non-North Carolina residents who didn't get in. Tough to look manly wearing their school colors. At some point in the last decade, I would've had to learn to like basketball more than football.

You know, no offense to any of these other fine institutions, but I think I'm pretty damn happy with the way things turned out. 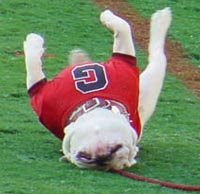 So with that done, here's the Ten:

Good times. Feel free to drop your own Random Tens and tales of what might have been in the comments.
Posted by Astronaut Mike Dexter at 9:12 AM

I got accepted at North Carolina.

I went to one of them for grad school, which means I currently have two alma matres in the Top 10!

Speaking of Bama fans, if you have some time check out my UGA-Bama blogger duel today.

An Dawg in Oz

Indiana
Michigan State
UK - (Hey, I thought I might have wanted to be a Dentist at one time)
Georgia
Miami U (of Ohio)


I chose the MAC school and I weep when I look at my loan payments and the national football rankings.

I was accepted to Florida, and pretty much had it set in my mind that I would be a Gator - until a last minute envelope showed up from UGA with a shocking "yeah, we want you" letter inside.

Anyway, having spent a long weekend on the Missouri campus, I can tell you your life would be no different had you gone there. That place is Athens Part II - looks the same, feels the same, chicks are the same. In other words, it's fantastic.

Interesting topic, one of my friends applied only to UGA and Arizona State. Last week she said there was no doubt she made the right choice.

For me it was UGA and LSU, probably would have turned out the same either way. I guess I traded two national championships for the HOPE Scholarship.

Instead, I joined the ranks of other out-of-state UNC alums and I work in public relations in NYC.

*sorry for the repost -- noticed a typo!

Hmmm ... went to local commuter college once I got out of the Army. I just chose the 4-year college that was close to my job.

But for law school, that is a different matter. Applied and accepted at Texas, Tulane, Vandy and Emory. Went to UGA because the instate tuition was cheap. And it was well worth it - my student loans are firmly under control and will be paid off early.

1. "Eve of Seduction" by Symphony X
2. "Tailgunner" by Iron Maiden
3. "Bat Out of Hell" by Meat Loaf
4. "Time Warp" from Rocky Horror Picture Show Soundtrack
5. "Man of Constant Sorrow" by Soggy Bottom Boys
6. "Lola" by Kinks
7. "We're Not Gonna Take It" by Twisted Sister
8. "Highwayman" by Highwaymen
9. "Here for the Party" by Gretchen Wilson
10. "For Those About to Rock (We Salute You)" by AC/DC

OK, this is the greatest relief, because I hid my wait-listing at Chapel Hill for MONTHS, such was my shame. Like, literally hid the letter. I got accepted at f'ing Carnegie Mellon. Oh, and Duke. WHAT THE HELL, UNC. Anyway, little less alone now. Merci bien.