Hey, guess what! Southern Cal beat Ohio State like a (two-dollar whore/rented mule/red-headed stepchild/two-dollar rented stepchild) on Saturday, so now they're number one and . . . Sigh. It's gonna be another one of those seasons, isn't it? It's almost as if fate said, "Hope you liked that wacky season last year when all the #2s lost and the national champion had two losses -- now it's back to the Trojans winning everything." Over-under on the first time Mark May mentions USC '08 as possibly the greatest team of all time: October 11. 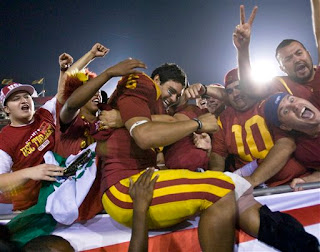 • Yup, Trojans at #1, move along, nothing to see here. What's even more frustrating is that they deserve it. Damn you, Matt Sanchez, your boyish good looks, and your unfailingly upbeat enthusiasm for the game!

• Meanwhile, the Buckeyes fall to #10 after being reduced to quivering spam out in L.A., but I still think they're at least the second-best team in the Big Ten. Which says more about the Big Ten than it does to Ohio State. Memo to nobody in particular: Everybody except the SEC and Big 12 sucks.

• I moved Mizzou up to #4 above Georgia, not because I was all that entranced by the Tigers' 69-bomb on Nevada, nor because I thought Georgia's struggles against South Carolina were cause for that much concern, but because . . . hmmm, why did I do that? Probably just to stay on karma's good side, actually. Whatever, lambast me in the comments, I probably won't even read 'em.

• A number of teams take hits for winning in a fashion that was, shall we say, aesthetically less than appealing; two of them, Oregon and Auburn, were teams I'd had major doubts about for a while now and on Saturday were kind enough to give me just enough excuse to penalize them. Oregon, you shouldn't be getting taken to double-OT by Purdue, much less falling behind 20-6 at any point. And Auburn . . . though the Jerry Springer entertainment value of your game against Mississippi State cannot be denied, you've still got major problems if you're having to win 3-2 against anyone. Of course, if you can't hold onto the ball against LSU any better than you did against Missy State, this "winning" thing will be pretty much academic. 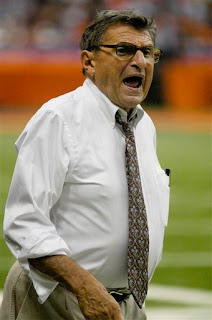 "You only exist out here 'cause of ME!!"

• Taking the express elevator to the Rain Man suite: Penn State, not that I think dropping 55 on Syracuse is anything to award Nobel Prizes over but their offense does look damn good, and they're arguably the class of the Big 10 at this point; the Stormin' Mormons of BYU, who deftly made us forget what that "excessive celebration" controversy against Washington was all about by drawing and quartering UCLA; and Alabama, who went a good ways toward showing that their plug-ugly performance against Tulane might have been a fluke after all.

• Taking the night train to Siberia: Arizona State, who will think twice about accepting gifts from Georgia-based restaurant chains next time; the Cal Bears, who made Maryland look like an offensive juggernaut Saturday morning, a feat with a degree of difficulty of 4.0; and Illinois, who accomplished the equally difficult task of getting played close by UL-Lafayette. The newcomers replacing them: Boise State, Tennessee, and Texas Christian. Welcome, and don't scuff my hardwood floors.

• How does West Virginia climb three spots for doing nothing? Beats-a me. I guess I felt sorry for them.

As always, your complaints, suggestions, and "HEY YOU F$#@ING MORON"s are welcome right up to the point where the poll numbers are tallied Wednesday morning. After that, cram it.

1. Georgia -- I'd be just as tempted to drop them as the sportswriters and coaches apparently were if I wasn't accustomed, as a Georgia grad, to seeing something just that ugly go down every time Georgia and South Carolina get together. Hope you enjoyed that quality time with an actual defense, Dawgs, it's gonna be like that prettty much from here on out. 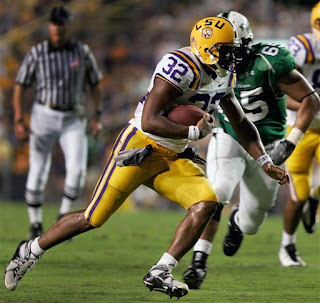 3. LSU -- The snacks have been whisked away and it's time for the Bayou Bengals to deal with the main course. Whatever the line on LSU-Auburn turns out to be, take the under.

4. Alabama -- Bounced back from an awful performance against Tulane to roll up more than 500 yards on WKU. It'll be interesting to see what kind of damage they're capable of doing against Petrino's Hogs.

5. Auburn -- Here's a question for you: If Auburn's administration had been so incensed by the Tigers' offensive performance against MSU that they fired Tony Franklin on the spot, would that count as being Croomed? I can't blame Tommy Tuberville for shaking his head and smiling as he walked to midfield after the final gun Saturday night, but I'm guessing there won't be any smiling this week.

6. Tennessee -- Looks like Tennessee finally located some semblance of offense . . . too bad it was against UAB, who actually managed to hold a team below 40 for the first time all season. Somehow I think Urban Meyer is vigilant, but hardly terrified, as he preps for the Vols this week.

7. Ole Miss -- Finally exhibited some defense, even if it was only against Samford.

8. Vanderbilt -- I've been hesitant to invest too much hope in the Commodores
, because I've seen this story before and it never ends well. However, if they can go into Oxford and knock off the Mixed Nutts -- and it's possible -- then they'll officially be for real. They're eventually gonna have to learn how to complete a pass, though.

9. Kentucky -- I don't think anything from that close win over MTSU is going to be showing up in their pregame Jumbotron highlight reel anytime soon.

10. South Carolina -- I predicted a close, grueling battle between the Dawgs and 'Cocks on Saturday, and USC still surprised me with their attitude and tenacity. This is a much better team than their 1-2 record would indicate, but given how far behind the 8-ball they already are, they're going to need a second-half surge every bit as dramatic as last year's second-half collapse if they want to make a halfway decent bowl game.

11. Mississippi State -- The conventional wisdom before the season started was that if Croom could coax even a little bit of improvement out of his offense, they might go back to a bowl. Well, I guess we know the answer to that one. Still, I'd like to thank Croom and Tuberville for giving us all a game that was, in its own way, infinitely more entertaining than the Southern Cal-Ohio State clash that was the weekend's big headliner.

12. Arkansas -- Getting their game against Texas postponed due to the hurricane was kind of like coming down with the flu and missing your flight on Pan Am 103. Mississippi State or no Mississippi State, I still think this is the worst team in the conference until they can beat somebody, ANYBODY, without needing a last-second field goal to do it.
Posted by Astronaut Mike Dexter at 6:55 PM

Please quit putting WV in your top 25. We're working the karma on this end and you aren't helping...at all.

Sure SC is #1, and looked like they could have fielded their 2nd stringers against tOSU and still won but haven't we seen them look like the Mongol Horde in the beginning of each season and then some how in mind-boggling fashion they lose to an totally inferior opponent?

To be fair, during that stretch when they lost to 'Furd, they had a freakishly large amount of injuries, 20-22 at one time but the question should be 'what lowly Pac-10 team that SC would normally spank will rise up and stun SC?'

My bet is on Arizona or non-P10 foe, Notre Dame. Hey, after the 'Furd debacle last year anything is possible.

One word for you: Under

Also, while I'm at it, I'd like to thank you for giving me a new perspective on Georgia plummet in the polls. Now that you mention it, I'm glad as hell that we aren't ranked #2 anymore.

Ideally, we could stay at #3 the rest of the season just in time for Oklahoma to lose to Missouri in the Big 12 championship game (after they have lost to...I don't know...let's say Texas).