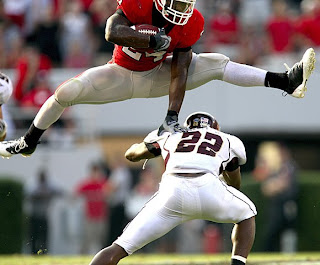 This certainly isn't the first time anyone's posted that photo this weekend and I'll bet it isn't the last, but if any single photo could represent the 1,000 words that perfectly sum up the Georgia-Central Michigan game, that one would be it: Presented nominal opposition by the Chippewas, our offense simply applied the force times mass divided by height or whatever physics equation it would take to determine the energy needed to get over CMU, applied that energy -- in this case, vertically -- and went on about their business. Not everything about the game was perfect, and here I'm talking specifically about the defensive lull we went through at the tail end of the first half and the first few minutes of the second, but even then the outcome of the game was never in doubt, and neither was the margin of victory, really; no matter how many points the Chippewas managed to put on the board, and it turned out not to be many, Stafford, Moreno, and the rest of them looked fully prepared to respond with as many touchdowns as they needed to move the final score from "comfortable win" to "blowout." It also bears mentioning that, if I'm reading the postgame report correctly, we put a total of 68 different players on the field, just one short of the number we utilized against Georgia Southern last week. Even when treating this matchup as a glorified NFL preseason game, in which the focus quickly shifted to getting as many backup players into the mix as possible rather than raining down a hailstorm of points, we crushed a team that won eight games last year and was armed with (supposedly) one of the most explosive offenses in the country.

And like Senator Blutarsky, I feel compelled to offer up specific praises for Knowshon, who did about everything an offensive skill players can do on the field even before he displayed a hurdling ability in the third quarter that would make Angelo Taylor wistful: He ran, he caught passes, he blocked like a champ, he fell on a fumble that wasn't actually a fumble in the second quarter but still got to the ball quicker than anyone else on the field. At this point I want to see him rebuild a transmission or go on "Everyday Italian" and cook up a veal marsala for six with Giada de Laurentiis, because I'm less and less convinced with each passing day that there's anything he can't do. And let's keep in mind that he's also tough, as this wellspring of ability was displayed on a day when Moreno had to spend a series or two on the sideline after taking a knee to the cranium.

Now, granted, all this came against Central Michigan, a team that -- had you been reading this blog earlier this week, and why wouldn't you have been -- you would've seen Yours Truly describing as being "made out of balsa wood and wet toilet paper" on defense. So nothing about this game should be construed as a sign that we're going to be dropping bombs on the LSU-Florida-Kentucky-Auburn gauntlet we enter a few weeks from now, nor even on South Carolina next week. But Georgia fans of a certain vintage have become accustomed to us losing focus and looking manifestly shitty in at least one supposed "gimme" out-of-conference game this year, and we've streaked through our two opportunities to do that with a pair of wins by a total score of 101-38. Kirk Herbstreit said on "College Gameday" Saturday morning that South Carolina's stunning loss to Vanderbilt on Thursday might inspire some premature chop-licking on the part of the Dawgs that could get them into trouble against LeFevour and CMU, and that clearly didn't happen. I'm still going to be biting my nails over the Carolina game this weekend and pretty much every game afterward, but the frustrating injuries aside, Georgia's in about as good a spot right now as anyone could expect them to be. 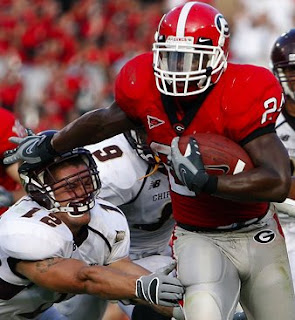 Other observations from a mostly blah weekend:

· Is it too late for me to change my vote in the Ohio State-USC matchup this weekend? Coming into the season, based on doubts about how effective the Trojan offense would be, I put myself in what was evidently a minuscule minority of people who thought the Buckeyes would win out in L.A. on the 13th, but Ohio State had only one more yard of total offense against Ohio than the fricking Wyoming Cowboys did on opening weekend. Yes, Beanie Wells was out against the Bobcats, but if a come-from-behind win against a bad MAC team is the best OSU can do in his absence, that doesn't inspire a lot of confidence in the "weapons" surrounding him, does it? Still think it's going to be a close game, though, and looking at both teams' defenses, a 10-7 final score wouldn't surprise me at all. 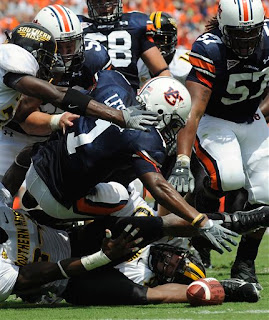 · Week two-plus of the Tony Franklin era at Auburn wasn't a whole lot more impressive than week one, though Tiger QB Chris Todd did come a little bit closer to bringing Auburn fans the passing game they thought they were getting from the beginning. Still, that wasn't one of the Jeff Bower USM defenses that drove people into the turf for most of the first half of this decade, so those expectations should probably be kept tempered, with Mississippi State, LSU, and Tennessee rolling up on Auburn's schedule. Of course, they can always take comfort in the fact that the newly christened juggernaut offense of the Crimson Tide could barely get out of its own way against Tulane.

· This is an open warning to the handful of coaches and sportswriters still throwing bones to Notre Dame bones in their Top 25 ballots: If I see Notre Dame anywhere in the Others Receiving Votes category later on today, even if it's just one vote, I'm coming after every one of you, every last mother's son. The Irish needed a fortuitous goal-line fumble to spark a fourth-comeback at home against a team that got beat by Cal Poly last week; the only positive thing I'd be able to take away from this if I were an ND fan is that Jimmy Clausen didn't get sacked 14 times. Otherwise, it looks like the Irish are going to need every last bit of favor they're still able to curry with the Father, the Son, and the Holy Ghost just to get to .500 this year.

· UAB Blazers watch: For the second week in a row, the Blazers hung tough with a heavily favored opponent for a half -- actually more than a half, as they were only a single TD behind Florida Atlantic late in the fourth quarter, but they still fell to the Owls 49-34. At this point, I think the season may be considered a success if we hold our Total Points Allowed stat under 500 for the season.

· Wofford Terriers watch: The Terriers lucked out and got an unexpected home game, as their matchup with Charleston Southern was moved from Charleston to Spartanburg so as not to be sitting in the path of a hurricane, and overcame an early 10-0 deficit to beat the Buccaneers 41-23. No word on whether any of the Bucs fans who stayed behind in Charleston responded to the question "Where are your Buccaneers?" with "Under my bucking hat." 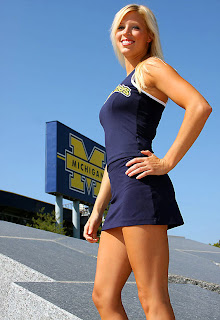 · Cheerleader Curse watch: The season's first official test of the SI.com Cheerleader of the Week curse came in Ann Arbor, where Michigan -- alma mater of Kristy Bojazi, whom you know and love as Deandra on FX's "It's Always Sunny in Philadelphia" -- escaped the curse but needed a fourth-quarter TD run to put the game away against Miami-Ohio. Thus the curse starts off 2008 with a whiff, but we can always hope it'll get back on track this week. SI.com, I humbly submit any of these fresh-faced young lasses for your consideration.
Posted by Astronaut Mike Dexter at 10:08 AM

Ready to kick some ass?

Just let me know when and where and I'll be there with my crowbar.

I dislike the term "defensive lull", not because there wasn't a period where the defense did not play perfect; there was. But, it is silly to think we were going to hold this team scoreless. In the first 20 minutes I don't think they had anything but a three-and-out. And we got re-oriented on task after their brief fling with the end zone. All in all, I would call tripling their score using 68 players a dominant performance. I am also comforted that UM made UF look pretty ordinary for three quarters. We just need to keep going and build on what we are doing.

I mean getting top 25 votes after barely beating a glorified Community College team? Can't there be a Papal Bull issued against those voters?

You know who didn't post that Knowshon picture? ESPN.

Southern Cal will beat Ohio State worse than LSU did last year. Take it to the bank. It will be a massacre.