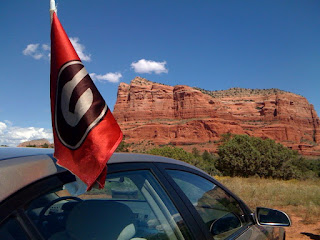 I don't know how the residents of the 48th state feel about this, but the Dawgs have kind of taken over out here, y'all. There were Bulldog fans at the airport, Bulldog fans roaming Mill Avenue on Thursday night, Bulldog fans at Montezuma Castle National Monument about an hour north of here, Bulldog fans all over Sedona yesterday afternoon. It almost makes a tear well up in my eye to think I can go 2,000 miles away from home and still have someone yell "GO DAWGS!" at me while I'm walking down the street.

Anyway, I know I might've been kind of harsh with my greater-Phoenix-as-Orlando-with-cacti assessment yesterday, so let me just say that Sedona and/or vicinity were pretty amazing -- 90 minutes' worth of "Look at that! No, look at THAT!" from our little two-car convoy on I-17. The funny thing is, there are "scenic view" pulloffs every few miles on the highway, as if the scenic view wasn't 360 degrees all around you -- like the highway department was saying, "Oh, THAT towering 2,000-foot-tall rock formation, that one SUCKS, but this one's AWESOME."

Here's me at one such pulloff, looking like a tool. 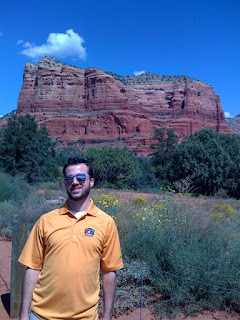 Unfortunately, I didn't get a picture of the sign for Dry Beaver Creek as I-17 passed over it a few miles southeast of Sedona. Yes, I'm still immature enough to find that hilarious.

Everyone out here's been really nice, though -- occasionally bemused at how many Georgia fans have swarmed out here, but nice nevertheless. The park ranger at Montezuma Castle said that Georgia fans were second only to Italians in terms of the sheer numbers of people he'd seen out here over the past week, and I'm confident we'll have surpassed the eye-talians by the time the weekend's over.

Anyway, "Gameday" is coming on as I right this, and it'll be time to gear up before too long -- I think the red pants are fixin' to get busted out today, y'all. 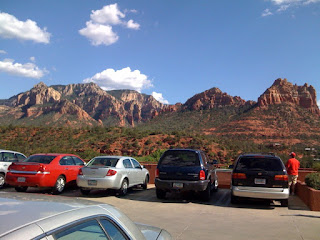 Posted by Astronaut Mike Dexter at 9:46 AM

I found that phenomenon remarkable (and remarked on it often). I love the beauty of my home state, but in my part of the world, it's either Tifton or Toccoa. Out there, it's both at the same time.

Have a great time. Pace yourself. Represent us well.

After reading your first paragraph, I think I teared up a little...I'm not sure which is more beautiful -- all those Dawgs in Tempe or the surrounding nature. Wish I could be there.

Doug, why are you wearing arizona state colors? WTF man?!

you look like my brother when he was 7 standing in front of the Christmas tree. What a facial expression

Kind of a long way to go to wear a yellow shirt.

Good thing it was warm or you probably would have had on the Members Only Jacket that matches those sunglasses.

Good lord, people. It's a well-known fact that if Doug wears the opposing team's colors the Friday before the game, the Bulldogs win. What, do you expect him to risk jinxing the team just so you can see a picture of him in red and black? Is that what it's worth to you? Have some decency, man!

Glad that you got up to Sedona. I'm going up there today on my way to a week at Grand Canyon/Bryce Canyon/Zion Nat'l Parks.

Sorry we couldn't meet up last night, but I'll be in Athens in 3 weeks for UGA-UT; hopefully I can buy you that beer then.

Safe trip home to you and all other Desert Dawgs.