BlogPoll roundtable #2: Thank you for choosing the Georgia Bulldogs . . . 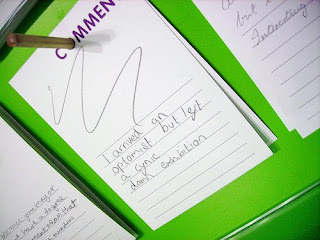 Michael at Braves and Birds has roundtable-hosting duties this week, and he's got an interesting way of going about it: assuming the format of the restaurant comment card. Overall, I find Georgia's service excellent so far and I would definitely come to them again for my football-watching needs, but here are the slightly more specific answers to Michael's actual questions:

1. How would you rate your program's service to you in the first two weeks of the season?

Pretty damn near impeccable -- I can't really find any one unit to lodge any major complaints about. Just as long as the staff understand that the orders are only going to get more difficult and complicated from here on out. The folks in Baton Rouge and Jacksonville, in particular, have a reputation for being particularly demanding clientele.

We've rolled up 1,087 yards and 101 points in two games; I'd say our scheme is runnin' pretty damn near perfect at this point. And while a fancy-pants spread scheme might get us more media attention than something boring like, you know, Knowshon Moreno leaping over standing human beings, I can't say I'm harboring a lot of jealousy of the spread folks at this point. There's something refreshingly old-school about Matt Stafford launching 50-yard bombs downfield and Knowshon making ridonkulous jukes around opposing linebackers as if his hips were mounted on a swivel like a G.I. Joe action figure's. If lovin' that is wrong, I don't want to be right. 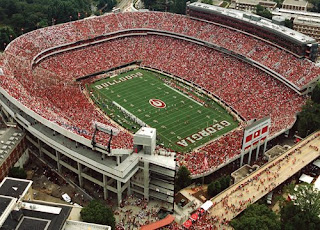 Not appearing in your picture: me.

That's a tough one, considering that it would've cost me upwards of $125 just to GET INTO THE DAMN STADIUM FOR GEORGIA FRICKING SOUTHERN. But all the times I've been in Sanford Stadium recently, I've been pretty pleased -- everything's ridiculously expensive, of course, but nothing salves the burn of a 95-degree, 95-percent-humidity early-season gimme game like those Minute Maid frozen lemonades they sell . . . and look, we even have Subway now! A few more home games and I'll be even skinner than Jared.

4. As an incentive to provide your valued feedback, you will be entered into a drawing for exciting prizes! What one prize would you like for your program?

Gosh, it almost sounds churlish to ask for more when we already have so much. I don't know . . . ease back on the penalties, maybe? Georgia is the most penalized team in the SEC at the moment, and while LSU proved pretty emphatically last season that penalty yardage is in no way a national-title-killer, I'd feel better if we cooled it with the false starts and illegal substitutions. I couldn't point to a specific game, or even a specific drive, where penalties really slammed the brakes on our offensive production, but it's one thing to pull consecutive false starts when all it means is piling another 10 yards on Central Michigan's defense, it's another thing entirely when that defense is South Carolina's and they're looking to claim a top-five scalp to prove their loss to Vanderbilt was only a hiccup.

I don't know about Flingers, but I definitely don't think we're Chotchkie's, because we're not big on pieces of flair in the Georgia program. No, I'd have to say we're Black Angus -- been around for a good bit, and while we've altered our menu somewhat to roll with the changing times, we're still simple, big, and hearty to the point of being almost unsettlingly so. Plus this gives me a chance to link to one of my favorite stand-up bits ever, Patton Oswalt's riff on steakhouses (audio NESFWBH, as in Not Entirely Safe For Work, But Hilarious):

Incidentally, my mom now convulses with laughter at the mere mention of "potato bacon bombs." I think Georgia's defense, deep as it is, is kind of our version of Black Angus's "gauntlet of angry food": Here's Geno Atkins and Corvey Irvin in the defensive interior. Then we'll throw the pass rush at you with Rod Battle and Jarius Wynn. Then we'll wheel out our linebacking corps of Ellerbe, Curran, and Gamble! And if you can handle that, then here's strong safety CJ Byrd! And Asher Allen and Prince Miller at the corners! AND RESHAD JONES COMING TO TAKE YOUR F$#@ING HEAD OFF! AND WE'RE NOT EVEN INTO THE SECOND STRING YET! GEORGIA BULLDOGS, BITCHES! AT SANFORD STADIUM, YOUR NAME IS PEACHES!

Anyway, the point is, this is not an establishment for beginners. If you're gonna come in here, you better be hungry. 'Cause the question isn't whether we're going to roll out the gravy pipe, it's when.
Posted by Astronaut Mike Dexter at 8:37 PM