Last year Todd of the excellent Crimson Tide blog Roll Bama Roll was kind enough to participate in a roundtable with me and Paul Westerdawg, answering some of our questions about the Alabama team as we headed toward the big game in Tuscaloosa. This year the big game is even bigger, as Georgia and Alabama are ranked #3 and #8, respectively, for this weekend's matchup between the hedges. The perfect situation, in other words, for another roundtable, which we're both bringing you this morning. My answers to Todd's questions are here, and as for his answers to my questions, they are as follows:

1. What were your honest expectations for the Tide coming into Year Two of the Saban regime, and how have those changed in the wake of Alabama's 4-0 start? 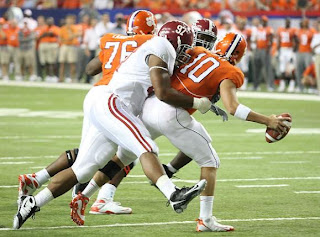 I really expected that we were a 9-3 team with (probable) losses to Clemson, UGA, and LSU and an outside shot at hitting 10 wins since, well, Clemson. My biggest hope and expectation was that we would finally win all the games that we were supposed to and so long as we did that (i.e. no more November collapses) I would consider the '08 season a success. I must say, though, that even as crusty and bitter as the last decade of Bama football has left me, I'm starting to at least sip the Kool-aid here and there. Should the Tide prevail on Saturday, I'll be taking baths in the stuff, and when I say baths I'm talking sexy baths full of sundressed Alabama and Georgia sororit . . . sorry, I went to a weird place there.

Anyway, I'm still very cautious in my optimism since Clemson rolled over after five minutes of play and looked absolutely pathetic, we struggled against Tulane, Western Kentucky is Western Kentucky, and the Arkansas domination was more of a function of their scheme changes and loss of talent than anything we did, which was miss a ton of defensive assignments that allowed their offense to move the chains more times than I was comfortable with and also regress as far as our own ability to convert on 3rd down. But we are by and large whipping hell out of teams, so that has to say something positive about the Tide, and just the simple fact that we avoided a letdown against Tulane and haven't had the kind of offensive meltdowns and boneheaded turnovers/mistakes that cost us so dearly last season has me thinking the team has finally shed the kind of negative (coke-dealing) weight that has caused a lot of internal problems and kept the team from playing like one for the past few years.

2. It seems like the strongest bullet points on Alabama's résumé are definitely the Clemson win in the Georgia Dome and the evisceration of Arkansas -- but as an impartial observer (OK, somewhat less than partial this week, perhaps) I'm still not sure how much stock to place in those. What's your take on that, and what aspects of Alabama's performance in those two games do you think will be most applicable to the game this weekend?

I think the best way to look at a team that is whipping up on inferior competition is to think "Well, they should be." I've been very vocal over at RBR about how the first four weeks haven't really taught us a lot about the team so far, but I've also been very happy to see Alabama finally taking it to teams that they are clearly better than. Watching us struggle and lose to mid-majors (and not even good mid-majors) over the past decade has given me the sense that good teams beat the hell out of bad teams and move on while mediocre teams scrape by the bad teams and are thankful for the victory. The fact that we learned our lessons against Tulane by continuing to play like a dominant, physical football team at Arkansas after a rebound game against the Hilltoppers makes me firmer in my belief that Saban has been able to get through to his players what he is constantly preaching -- namely playing with both physical and mental toughness the entire game no matter what the scoreboard looks like, always respecting your opponent, and understanding that anyone can beat anyone with the right preparation and effort.

3. Which position-vs.-position matchup are you most licking your chops over as we head into Saturday?

I don't know if "licking my chops" is entirely accurate here, but I'm really looking forward to seeing how the UGA O-line handles our front seven on defense. Georgia has given up six sacks so far this year, while our D-line went from liability to strength with the emergence of both The Legend of Terrence Cody and Josh Chapman at NT and the continued strong play of some very underrated DEs. Arkansas was able to corral them somewhat (having Jonathan Luigs at C didn't hurt), but for the most part they've been bullying every offensive line they've come across so far and are functioning like a 3-4 line should: occupying blockers, closing down running lanes, and letting the linebackers do all the fancy stuff. 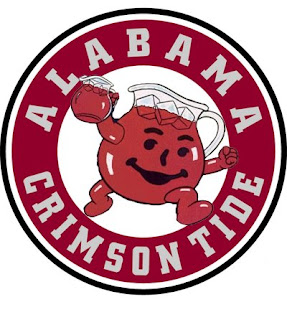 I can only hope Cody won't be crashing through our offensive line as easily as, say, this guy.

4. Conversely, which matchup has you the most worried?

The UGA passing attack vs our pass coverage. As I already mentioned, Arkansas moved the ball way too easily on us Saturday, and most of that was because of missed assignments in coverage. In years past you could always count on a good many drops from the Georgia receivers (last year's game probably wouldn't have gone to OT if Tripp Chandler has caught even half the balls thrown his way on 3rd down), but this year's model has clearly stepped it up in that regard and it makes the Dawgs pretty frightening when you realize they have two great running backs, a great QB, and now a stable of solid receivers. Also, y'all ran screens all over us last year because our DBs couldn't get off blocks quick enough, and we've seen that happen a couple of times already this year, so I'm not looking forward to that either. 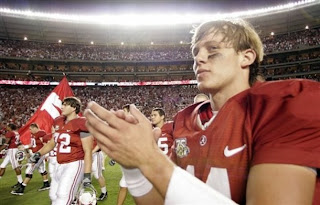 Unfortunately there is not. So far this year Bad John Parker Wilson hasn't made an appearance, so we're all quietly hopeful he died a silent death during the offseason at the hands of Jim McElwain. If there was ever a time for him to appear, it was against Tulane, when he was constantly pressured, the biggest cause of his appearances time and again last season, but he was mature enough to throw the ball away if he could or just cover the ball and take the sack instead of trying to throw with a defender on his shoulders, either guaranteeing a fumble or a throw directly into the waiting arms of a defensive back watching all of this take place with sinister glee.

6. Between the two of them, UGA and Bama have a whole stable of very talented running backs -- and two of the most diabolical run defenses in the business. Out of all the RBs who will be on the field Saturday, which one do you think has the best shot at breaking through that and putting up some decent numbers?

I think Moreno probably has the best chance to make the big plays out of the bunch, but I wouldn't be surprised to see our own Mark Ingram come out with a better overall game. Moreno is a phenomenal player and there's no way we are going to simply shut him down, but I do think we have a good chance of keeping him contained enough to eliminate the back-breaking runs. I say Ingram could have the better overall game because he's a great between-the-tackles runner (the kind of stuff we want to run on any and everyone) and his yards after contact are always huge, a big reason he's become our red-zone back, and just really feel like he can pile up the non-flashy yardage in the game. 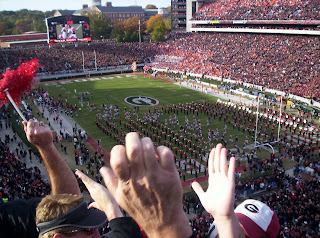 7. And finally, the Blackout. Cool? Hokey? Intimidating? A lame gimmick? What's your personal opinion on it, and as far as you can tell, what's Tide Nation's overall assessment?

First, all the comments I've heard and read about from our fellow Tide fans are excitement that Georgia is breaking them out for us, and I'd have to agree with that sentiment. There's also talk of an Alabama "White Out" to counter it, which I think makes the game even more exciting by establishing a big time "rivalry" feel to it that normally isn't there. As for my own personal opinion I think stuff like this is kind of cheesy, but it's a good kind of cheesy and is a big reason that college football is so exciting.

Thanks to Todd for participating in this and doing a great job over at RBR, and good luck -- although obviously not too much good luck -- on Saturday.
Posted by Astronaut Mike Dexter at 9:34 AM

Doug, do you know something the rest of us don't? You mentioned in your portion of the interview on RBR that Brannon Southerland would be back on the O-line for this game.

"He's going to be a godsend for the offensive front, particularly in our goal-line package, but he's also a surprisingly sure-handed pass-catcher out of the backfield."

Huh? I thought he was only going to be playing special teams as a punt protector and won't be the starting fullback until the UT game. That's what's been published anyways. So was that a little wishful thinking on your part or just a mistake?

I hope to hell you know something and can say for sure that he'll be back in business at his old position!

Thanks in advance for shedding some light on this. Keeping my fingers crossed!

So the more I think about it, and the more I look at Alabama's games thus far, I'm increasingly convinced we're going to win by 30. Minimum.

And when I get those feelings, of course, it's never good.

Ally beat me to it. Did you get the inside track or something?

Hmm.... Maybe to keep things fresh they should warm up in the black jerseys, but come out of the tunnel dressed as X-Men. The crowd goes wild.

No, no, guys, don't you see? This is just some clever misdirection on my part -- I'm trying to make the Bama fans think that Southerland will be back, so they'll game-plan for . . . and . . .

Derr, no, that was a mental error on my part -- I'd been scouring the Internets for info on Brannan before I wrote the responses to RBR's questions, and somehow between that research and the actual writing I managed to convince myself that he was going to be back at 100 percent. Which, unfortunately, is not the case.

I apologize for getting everybody's hopes up, and I can't even blame it on cold medicine -- that was just me being careless.

Damn. Damn. Damn. Just DAMN. I was really hoping that since you are the resident uber Dawg blogger, you might hae some insede source w/ Ron Courson. Oh well, dare to dream.

Thanks anyways - no harm, no foul.