I'll be honest with you, not a terribly exciting week on the BlogPoll and SEC Power Poll ballots; there were plenty of big games, but not a whole lot of truly mind-blowing upsets outside of West Virginia and East Carolina taking the pipe at the hands of unranked teams on the road. Fine with me, since after three days in Tempe I probably couldn't take the excitement anyway. First, the BlogPoll:

· Not a lot of movement in the first-class section this week other than Georgia and Missouri exchanging seats. Brigham Young's in the top 10 now after having won their last two games by an aggregate score of 103-0, and while I still feel a little funny declaring the Cougars top-10 material already, I don't know where else to put them until they actually lose to someone.

· Biggest riser for the week is Alabama; am I merely pulling a Lou Holtz and kissing the ass of the team the Dawgs have to play this week? Probably, but my original ballot had them at #15, and that definitely didn't seem high enough since the rest of the country is apparently convinced they're top-10 caliber. My main beef with them is I don't know how much stock to put in their victories over Clemson OR Arkansas, but I guess we'll find out in a hurry. Boise State also gets kicked up a few notches for pounding Oregon far worse than the final score indicated.

· The big droppers are Oregon, of course, and a South Florida team that seems intent on taking it easy on their in-state brethren -- here's a Florida International team that's usually lucky to play its own Sun Belt rivals within a couple touchdowns, much less someone in a BCS conference, but they were an onside-kick recovery away from a chance to tie the top-15 Bulls in the final minute. Maybe the Big East's particular strain of suckfluenza this year is especially contagious. 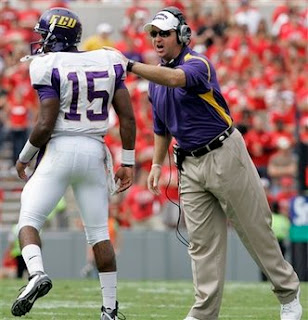 · Wave goodbye to East Carolina, who went from #15 to nowhere after crapping the bed against a bad N.C. State team. The two other teams that disappeared from the ballot were West Virginia and Tennessee, and oddly enough, fans of both of those teams left comments on my last ballot specifically pleading with me not to jinx the Mountaineers and Vols by including them. There's a lesson here, kids, and that is that you'll have to pony up if you want karmic favors like that. Ass, grass, or gas, nobody rides for free.

· Taking their places are Oklahoma State, Clemson, and Michigan State -- no offense to the fans of these fine squads, but they're basically the flotsam that rose to the top of the just-outside-the-top-25 pool, where nobody had any hugely impressive wins last week. Props to MSU for derailing the "ND IS BACK!" meme for a week or two, though. I almost gave them the nod over Clemson just for that.

And now the SEC Power Poll -- whose roundup to the week 3 roundtable, incidentally, can be found here.

1. Georgia -- Every year, for what must be five or six years now, I would ask Santa, "Please bring me a game-breaking receiver." And it never came. But 25,000 Dawg fans went out to Arizona this past weekend to find a beautifully wrapped A.J. Green next to the tree, or rather the mountain behind Sun Devil Stadium. And suddenly Matt Stafford has a new spring in his step.

2. Florida -- On the one hand, that was as thorough an evisceration of the Vols as I could've predicted, but on the other hand, it was mostly UT doing it to itself; most of the Gators' big plays were on defense or special teams, while Tebow was held below 100 yards passing for the first time since, what, he was in Pop Warner? This is a weird, weird team, but then again, it's not like anybody's ashamed to win with defense in the SEC these days. 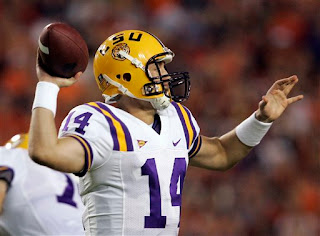 3. LSU -- Emphatically slammed the door on the Ryan Perrilloux debacle when Jarrett Lee overcame a lousy start to carry the Bayou Bengals to victory in a slugfest on the Plains. Anyone who thought that the QB situation might be enough to sink LSU this year might want to start exploring other options.

4. Alabama -- Dominated the Razorbacks on the road, but let's be honest, that was against a team that may not even cover a point spread against an SEC team for the rest of the year, much less actually win one. Still, I'm intrigued to see how the Tide's league-leading rushing attack will stack up against Georgia's crushing run defense, currently ranked #3 in the nation.

5. Auburn -- I was amazed that they scored 21 on LSU -- honestly, I figured LSU and Auburn wouldn't combine for 21 points -- but the Plainsmen clearly have some problems, first and foremost being the fact that their once-smothering defense allowed an inexperienced sophomore QB to turn into a hero Saturday night.

6. Vanderbilt -- I got a text message at the Houston airport on Sunday informing me that Vandy was ranked and I nearly had to be carted onto my plane on a stretcher. As Blutarsky points out, though, there are a lot of smoke and mirrors involved in the construction of that 4-0 record. Still, that still-undefeated record means they're not going to need that many more lucky breaks to snag a bowl bid for the first time since Cornelius Vanderbilt was actually alive.

7. Ole Miss -- Rough break for the Rebels on that last play against Vandy. Ed Orgeron's teams, however, would've used a heartbreaker like that as an excuse to pack it in the rest of the season; I'm confident Houston Nutt will be able to do better.

8. Tennessee -- The Vols came out of the tunnel on Saturday against Florida and basically said, "Oh, so you're gonna punch me in the face, are you? Watch this, I can punch MYSELF even harder!" It's like they're looking for ways to fuck up at this point . . . and yet as a Georgia fan I can't get too gleeful over this, because isn't this pretty much exactly where the Vols were at this point last year?

9. Kentucky -- Had a bye this past week, and I just checked the SEC sked for next week and the Wildcats are playing Western Kentucky. Jeez, guys, don't strain yourselves or anything. 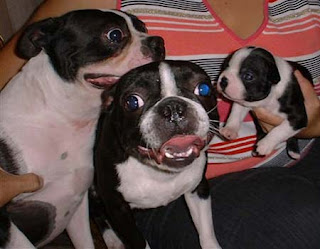 10. South Carolina -- FEAR THE TERRIER! Still, Gamecocks, you make it really hard for us Dawg fans to say stuff like "But for real, y'all, South Carolina is actually a pretty good team" when you're getting chased by Wofford all the way into the fourth quarter.

11. Mississippi State -- If you were a child psychologist and asked a six-year-old to draw a picture of "sad," the result would probably look a lot like MSU's offensive playbook. The only reason the Bizarro Bulldogs still avoid the bottom spot is, oddly enough, the 3-2 game against Auburn in which they displayed enough of a defense to hang in there against a ranked opponent. Other than that, they're abysmal.

12. Arkansas -- I'm not too modest to keep from saying I knew the Alabama-Arkansas game would be an ass-kicking, but even I couldn't have predicted just how bad an ass-kicking it would be. At this point you'd have to do a lot of talking to convince me Arkansas isn't going to go 2-10.
Posted by Astronaut Mike Dexter at 1:44 PM

The disparity between LSU and Auburn in the poll doesn't make much sense to me. I was at the game, and while LSU was certainly the better team, it was a game played close enough that Auburn and LSU should not be separated by 14 positions on a poll. Maybe it doesn't need to be changed, but I am curious to hear your explanation.

my God, you are a smug, braying ass.

If I'd known the inclusion of Tennessee in the poll was negotiable, I would've altered my Tempe wardrobe considerably.

Is that a Boston terrier puppy?

I think the Boston Terrier puppy deserves a caption and/or explanation. You can't just leave us with unanswered questions.

Correction: Auburn scored 14. J. Lee gave them the other 7. And when I say gave, I mean that the only way it coulda been easier if he had sauntered to the one and handed the ball off to an AU defender.

Sorry Doug, I just don't swing that way, not that there's anything wrong with that. But send me your addy I'll get the other two your way, pronto. Hell, I'll even send some moonshine! We need some karma in the worst way!