Poll dancing, week 5: It's at times like these when the German language really comes in handy. 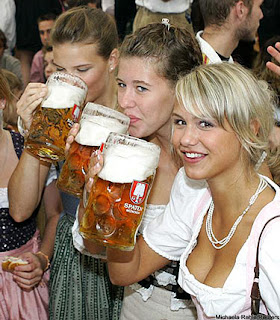 Drink up. It was that kind of a weekend.

Well, we've just experienced another late-September massacre of ranked teams -- seriously, it's becoming a time-honored annual tradition, enough that ESPN needs to come up with a better name than "Shakedown Saturday" or whatever they were calling it this past weekend. I would suggest "Ow, My Balls Saturday" or "Night of a Thousand Cockpunches," but obviously I have my own reasons for that. And now that I think about it, those might be a little cumbersome anyway; it's a shame we don't live in Germany, where we could just string a whole bunch of words together and come up with something nice and concise like Oberseite-fünfundzwanzigsturzensamstag. Or Tausendpenisdurchschlagennacht. Go look it up.

I got to witness all of this, including Georgia's überraschendetestikelentstellung at the hands of the suddenly terrifying Crimson Tide, with a head that feels like it's stuffed with cotton balls and mucus streaming out of an impressive array of orifices, so please be patient with me if none of this looks even remotely coherent.

Games watched: Oregon State-Southern California, the second half of Ole Miss-Florida, most of Auburn-Tennessee, the entirety of car windshield-bug Alabama-Georgia.

· You will note that nearly everybody in this poll moves up or down at least one spot -- not surprisingly, the Chinese fire drill is most intense in the top 10, where three of last week's residents got cracked in fairly humiliating fashion. There's a part of me that wonders if I'm being too easy on those three squads by keeping them in the top 10, but I'm sure y'all will let me know if that's the case, in the polite, mature, and thoroughly considered manner I've come to expect.

· The biggest risers of the week are, not surprisingly, Alabama and Ole Miss for doing their part to make the SEC East the winner of this week's Durr Hurr Hurr Your Conference Sucks trophy. The thought did occur to me to put Alabama at the very top, and I may yet do that between now and when the votes have to be finalized on Wednesday, but honestly you could probably throw a blanket over the top three teams on this ballot. 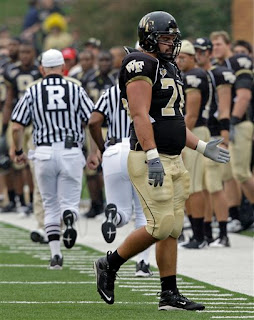 · Most of the other notables on this list are descenders -- Wisconsin, down five for throwing away a three-touchdown lead over Michigan, a team that at last inspection had no discernible offense, which is sort of like losing a kickboxing match to Max Cleland; TCU, who only loses two spots for having the good manners to accept their requisite pummeling from Oklahoma; and Wake Forest, who just now got that PLEASE MAKE SURE YOU HAVE DISGRACED THE CONFERENCE AT LEAST ONCE BEFORE THE END OF THE FISCAL YEAR memo from the ACC and obeyed it in whiz-bang fashion by losing at home to Paul Johnson-less Navy.

· A crying, vomit-spattered Clemson is escorted out of the top 25 and put into a cab, hopefully never to return, while a Michigan State team I'm still not quite sure what to make of yet gets elbowed aside by a Virginia Tech team returning home from a successful trip to Nebraska.

And now my SEC Power Poll ballot, which, if it were a hard copy as opposed to a blog post, would be tear-stained: 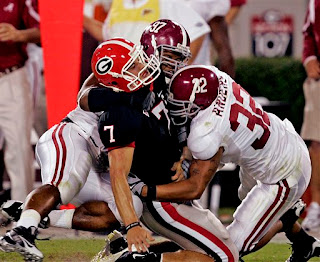 1. Alabama -- If the SEC were "Star Wars," we would've just seen the part where the Death Star fires up its superlaser and destroys Alderaan. And we've still got a long way to go in the movie before anyone lobs a proton torpedo into the Death Star's exhaust port.

2. LSU -- Somehow they allowed more points to Mississippi State last week than the Bulldogs had scored total in their three previous games against D-IA competition. For LSU's sake I'll hope that was just a post-Auburn hangover.

3. Georgia -- We didn't just get beat down by the Crimson Tide, we got beat up: This week's injury report literally has enough players on it to fill a CH-46 medevac helicopter. I can honestly say I've never been as stoked about a bye week as I am about this one.

4. Florida -- The repeated breakdowns by their secondary against Ole Miss had to remind Gator fans of last year's team, only unlike that team, Tim Tebow and the offense haven't really been able to get things started, either. By the way, that was a nine-game SEC losing streak you broke for the Rebels, guys. 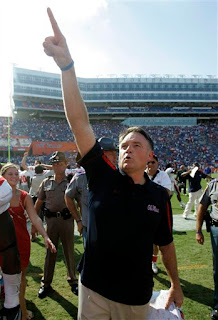 6. Auburn -- I can't remember the last time there was this little buzz around an Auburn-Tennessee game, nor the last time an Auburn win in said matchup was less heralded. Gary Danielson sounded positively insulted at times on Saturday that neither the Tigers nor Vols were doing any better than they did.

8. Kentucky -- You know, Tulane and Kentucky are both actually fielding pretty good defenses this year, and Tulane made a game of it against Alabama when the Tide were coming off their big win over Clemson, so maybe, just maybe, Kentucky could go to Tuscaloosa this week and . . . no, forget I said anything.

9. South Carolina -- The good news is Stephen Garcia looked all right in his first start Saturday; the bad news is the Gamecocks might now finish the season as the only D-IA team UAB managed to hold under 30.

10. Tennessee -- I actually talked to a Tennessee alum on Sunday who told me she wanted Casey Clausen back. This isn't how the Clawfense was supposed to work, is it? In their first two SEC games, the '08 Volunteers have twice as many turnovers as touchdowns.

11. Mississippi State -- Managed 24 points against an LSU defense that was probably something less than entirely focused. Er . . . moral victory? Maybe?

12. Arkansas -- They've gotten annihilated 101-24 in their last two games and have drawn Florida and Auburn for their next two. Now then, readers, do we think Petrino announces his resignation between those two games, or does he wait until after the Razorbacks lose to Auburn?
Posted by Astronaut Mike Dexter at 7:30 PM

Not sure how anybody can put USC (loser to an unranked Oregon State) above UGA (loser to an Alabama that should be ranked #1)...

Sheesh. I'm as skeptical about the rest of Vanderbilt's season as any of our fans, bar none. Even I can't construct a coherent argument for putting a two-loss Ole Miss team 18th and leaving Vanderbilt out entirely.

I could come up with a reasonable argument for not ranking either one of us. Even if somehow you believe that touchdowns and field goals don't matter and the "real" winner is the team with the better net yardage, we'd be 1-3 and Ole Miss would be something like 3-2 with losses to Florida and Memphis. What gives?

It won't matter after Vandy beats Auburn this week - yeah, I said it.

I went by Vandy's ticket office last week to get Auburn tickets...sold out... WTF? Vandy doens't ever sell out. Usually season ticket holders dump their tickets by this time of the year.

I think to understand Vandy selling out a game one must first read the book of Daniel.

Vandy deserves some love, Doug. Even if only a little and only for a week. Besides which, they did beat Ole Miss.