SEC Power Poll Roundtable: In which the earth has not yet imploded.

Added to this year's SEC Power Poll festivities is a regularly scheduled roundtable, the first of which is being hosted over at Garnet and Black Attack. Their questions, and my answers, follow:

1. Pretend for a minute that Vanderbilt wasn't 2-0, then answer this question: What has been the most surprising thing in the SEC so far this season? 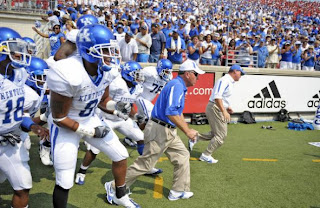 I don't think there have been too many surprises in the SEC so far this season, and most of what has surprised me seems like short-term stuff -- like, I was surprised to see Jonathan Crompton perform so poorly in his debut as the Vols' undisputed starter, but I don't see him staying at that level for very long. I guess what's surprised me the most is how Kentucky, for the first time since probably the Bill Curry era, is actually fielding a strong defense. You can throw out the Norfolk State numbers if you like, but check out what they did to Louisville in the opener -- held 'em to only 205 total yards, including just 53 on the ground. Yeah, Louisville sucked last year, but it wasn't because of their offense, and despite losing Brian Brohm they still have an excellent QB (Hunter Cantwell) and a good menagerie of talent at the other skill positions; this was not an offense that should've ever had to worry about getting shut out, certainly not by the Wildcats, but that's exactly what happened. Fortunately for the rest of the conference, Kentucky's offense appears to have taken an even bigger step back in the wake of André Woodson's graduation than we thought they would, but given their schedule, that defense alone might just be enough to shove them back into a bowl game.

2. Conference action has either just begun for most teams, or will Sept. 20. (The exception is Kentucky, which I believe plays I-AA teams until mid-November.) From what you've seen so far, how will your team fare in your division? If it's not going to win, which team will?

I've only seen the Bulldogs whup up on Georgia Southern and Central Michigan so far, so one can only draw so much from that -- but at the same time, I (along with the rest of Bulldog Nation) have become accustomed to seeing the Dawgs get sloppy and throw up a truly slack-ass performance in at least one non-conference gimme game per year, and I think we've managed to avoid that convincingly in our first two opportunities to do so. If that speaks to a heightened level of focus on our part in 2008, and if Mark Richt has truly advanced as much as a leader and motivator as he appeared to over the latter half of '07, then we're in great shape.

And while I certainly have no right to be dismissing Tennessee after the last couple years, I still think the division race (and most likely the SEC title race) comes down to Georgia-Florida. We've got a hell of a task on our hands playing them right after coming home from Baton Rouge, but if the Gators are still struggling to muster a running game by that point, we've got a chance. The thing is, given our horrendous draw from the West -- LSU, Auburn, and Alabama, arguably that division's three best teams -- we could beat Florida up and down and still get knocked out of an SEC-title-game berth, but I'm doing my best to repress that thought at the moment.

3. Which SEC player that few of us are paying attention to is poised to have a breakout season? Try to choose someone not on your team. 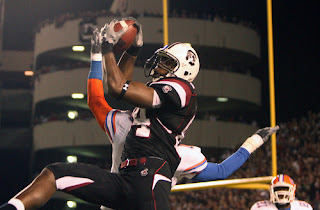 Not only will I pick someone not on my own team, I'll pick someone from the team we're facing this weekend: South Carolina's Jared Cook. Even as a tight end, he leads the Gamecocks right now with 10 catches for 130 yards and a touchdown, and with Kenny McKinley out of commission for a little while, he'll have a chance to step up even more. He made some very pretty catches last season and made some more this year, without the benefit of a truly elite QB on the other end of them, and he's probably the guy I'm most worried about as the Dawgs head into Columbia.

Another potential breakout player is Tennessee tailback Montario Hardesty -- not flying quite as far below the radar as Cook is, but Tennessee's frustrating loss to UCLA has caused a lot of people to sort of dismiss the Vols' offense (no, I'm not going to call it the "Clawfense" until they actually beat a decent team with it), and that would be a mistake. Hardesty has nearly all of Arian Foster's upside without all the fumbles -- incidentally, he also has both of UT's offensive touchdowns so far -- and had Clawson fed him the ball in the second half against the Bruins rather than getting cute and asking Crompton to throw it 41 times, the Vols probably would've won that game. Gerald Jones is a promising talent, but I'd look for Hardesty to have the best shot at breaking out of a Vol backfield that's been fairly crowded the last couple years.

4. Both Arkansas and LSU have had games delayed because of hurricanes. If you could choose a game on your team's current schedule to get postponed because of inclement weather, which game would you choose and why?

Honestly, most of Georgia's games I'd like to move up rather than postpone them -- let's go ahead and play Auburn now before they get their spread offense figured out. Quick, let's get Florida out of the way before they find a running game. I guess I'll turn my eyes to the most hurricane-prone area in the Southeast, though, and say LSU. If God could find a way to aim a big one at Baton Rouge that weekend, then we'd have a bye week before Florida, which obviously worked like gangbusters last year. Only problem is there's no place to move that game other than playing it on December 5 and moving the SEC title game back a week, but there's no reason the SECCG should be competing for attention and air time with all those other candy-ass conference-title games anyway.

5. So, the Large Haldron Collider hasn't destroyed the Earth -- so far, anyway. But had the world ended Wednesday morning, which SEC game would you have most regretted missing? Assuming, of course, you had been around to regret it. (Head...hurts...)

Well, it's gotta be Georgia-Florida. I view that game kind of like I view any OMG AWESOME new roller coaster they open up at Busch Gardens or something: Sure, it's scary, and there's a not-insignificant chance I'll come out of it with tears streaming down my face and urine streaming down my pants leg, but if there's a mere chance that it might be one of the most awesome experiences I've ever had, I gotta hop on board and prove I'm man enough to go through with it. Besides, if the world had ended without anyone ever finding out whether Georgia had finally and irrefutably ended the Gator hex, not to mention whether Urban Meyer had been made to look like a fool for those "we're going to make it a big deal" comments, then I just don't know that I could enjoy the afterlife that much, could I?
Posted by Astronaut Mike Dexter at 8:37 AM

Nice post. You're totally right about the Florida-Georigia game...the opportunity for immense pleasure and pain are both abundant. But, I live in Gainesville, and its either a long ride home or a long night partying. And then 364 long days until it happens again.
Go Dawgs!