A memo from the desk of Arnold T. Pants, Esq.:
Knowshon! Legos! Videos! Bacon! It's a cavalcade of awesomeness!

• First things first: the Knowshon Hurdle, because you can't get enough of it . . .

. . . but to me, that isn't as personally affecting as today's revelation that KNOWSHON LIKES PLAYING WITH LEGOS. I already knew he was an amazing athlete; now I might just be prepared to call him the most awesome person who has ever lived.

• While I do that, check out this campaign video for the Palin we should be electing this year.

Incidentally, I have the audio from the "strange women in ponds distributin' swords" scene on my iPod.

• Back to football for a sec: A couple seasons ago, as I'm pretty certain I reminded you multiple times over, I won the Job Award in the 2006 College Football Blogger Awards for doing the best job of toaster-throwing covering Georgia's midseason descent into madness (and subsequent redemption). That was flattering, and I appreciated it, but even I have to bow down to one Washington Huskies fan who, in the wake of Washington's controversial last-second loss to BYU, logged onto U-Dub's Scout.com forum and posted about as eloquent and original an expression of utter hopelessness and despair as I could ever hope to come up with even in my darkest hours:

Whatever sins the Husky football program committed, whatever the sins of the late James era, the Neuheisel era, the Gilby-Ty era...whatever sins were committed 100 years ago, the McElhenny years, the days of prejudice...whatever wrongs we have done individually or collectively as Husky Nation....surely we have been punished enough. because now, it's just piling on. I am officially calling a 15 yard unsportsmanlike penalty on God.

That's truly brilliant . . . blasphemous, certainly, but brilliant. Hat tip to Brian Cook, whose brilliant "This Week in Schadenfreude" series is almost as much fun as building Lego creations with Knowshon Moreno.

• Also brilliant is this story in The Onion this week, only there's one problem: The airplane in this fake ad . . . 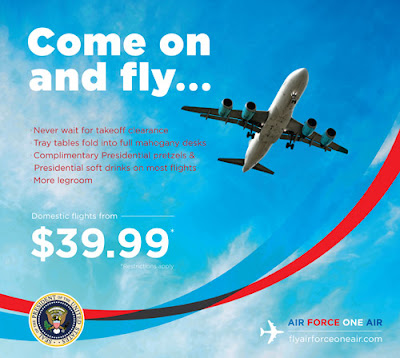 . . . is not Air Force One, nor a Boeing 747 at all, but rather an Airbus A340 from those snooty-ass Eurotrash over at Airbus Industrie. [/OCDplanegeek]

Still, good show overall, and I also owe long-overdue props to The Onion for their "Onion News Network" series of fake news videos, because they are truly breathtaking in their verisimilitude and completeness. Not only are the segments funny, not only are the production values surprisingly high, but the actors who play the news "anchors" and "correspondents" are pitch-fucking-perfect in their portrayal of America's TV media. Seriously, they're like "The Daily Show" taken to another dimension of reality and lived-in-ness. If you haven't bothered to check any of them out yet, you can start with this one . . .

. . . and don't forget to also take a gander at "Reporters Expose Airport Security Lapses By Blowing Up Plane," which sounds like something "NBC Dateline" might actually do for sweeps week.

• Also covered in The Onion this week, albeit in entirely straight-up fashion: Should everything taste like bacon? I was a very early proponent of the theory that bacon is humanity's Universal Food, as it can be added to literally everything, so the prospect of adding bacony goodness to existing foods through "bacon salt" is one I find highly intriguing. What do you think, sirs?
Posted by Astronaut Mike Dexter at 8:53 PM

Email ThisBlogThis!Share to TwitterShare to FacebookShare to Pinterest
Labels: airplanes, blogs that are better than mine, embedded video, football, legos, unmitigated awesomeness

Hmmm.
Bacon derives its awesomeness from other foods (even good ones) reminding us that they aren't bacon.

Will is right. If everything already tasted like bacon, we wouldn't want to add it to everything. But it makes everything better, no doubt about it. Even chocolate.