I built this Friday Random Ten+5 on rock and roll.

The other day I downloaded whatever the latest version of iTunes is, and one of the new features is that you can select songs or albums by flipping through icons of the album covers themselves, almost as if you were going through the bins at a record store. (I assume this is a new feature; it's possible that it's been around a long time and I'm only just becoming technologically savvy enough to take advantage of it.) But anyway, seeing my music collection this way for the first time showed me that there are some awfully goofy album covers out there, particularly from the 1980s. I guess I didn't notice it because I'm the kind of music listener who will pick and choose my favorite tracks off the Internet as opposed to going out and spending money on an entire album, but yeah, even as a vocal connoisseur of '80s music, I have to admit that some of that shit is downright hilarious.

With that in mind, this week's +5 is Five Amusing Album Covers That Tell You Pretty Much Everything You Need To Know About Pop Music In The '80s. And yes, just to eliminate any doubt, I do have at least one song off each of these albums on my iPod as we speak. I'm not necessarily proud of that; sometimes things just happen that way. 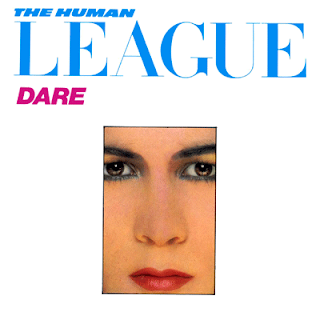 The Human League, Dare (1981)
This may have been a seminal album in early-'80s New Wave synth-pop, but it didn't get there without that staple of early-'80s New Wave synth-pop, the smooth-skinned makeup-wearing androgynous man/woman/person. Is that frontman Philip Oakey or female vocalist Joanne Catherall in that picture? Is there any way of telling? Either way, whoever it is makes the Pet Shop Boys' Neil Tennant look like John Wayne. 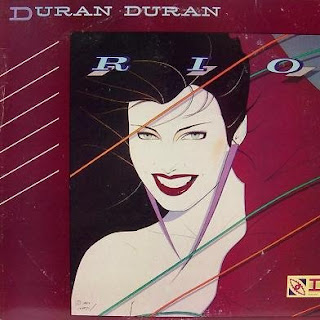 Duran Duran, Rio (1982)
Nothing says "eighties pop album" like a rosy color scheme, random art-deco-ish lines and flourishes, and a Patrick Nagel drawing of the type that would soon be knocked off at beauty shops and women's clothing stores for the duration of the decade. This style would be reflected in the sleeves for the two most popular singles off that album, "Hungry Like the Wolf" and the title track. 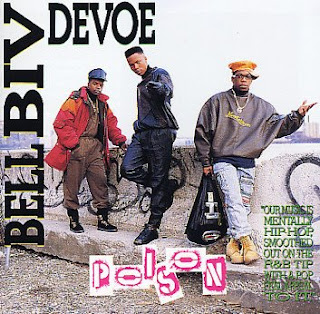 Bell Biv Devoe, Poison (1990)
Poison was released on March 1, 1990, so I guess technically it's not an '80s album, but it was recorded over the preceding two years, and the early-era New Jack fashions on the cover speak for themselves, so I'm counting it. The thing that I noticed while looking at it today that I'd never noticed before is that block of text in the lower-right-hand corner: It reads, "Our music is mentally hip-hop, smoothed out on the R&B tip with a pop feel appeal to it." That's the only time I can recall a pop group being so helpful as to put a detailed description of their musical style on the cover, which might've attracted new listeners, I guess -- or maybe it was meant to be a "WARNING! May contain hip-hop or hip-hop-like substance" disclaimer to parents who were thinking about running out and getting this for their kids. A line like "Me and the crew used to do her" from the title track might turn them off real quick like. All that said, if somebody could ever teach me to do the dance from the video as well as this, I would owe that person my undying gratitude. 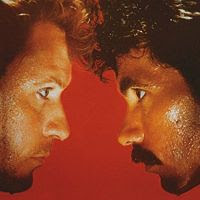 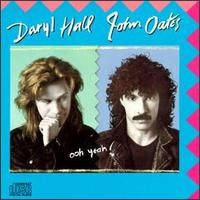 Hall & Oates, H2O (1982)/Ooh Yeah! (1988)
OK, so this is two albums, but they're both equally hilarious and in similar ways. H2O, the album that contained such hits as "Maneater" and "Family Man," featured a cover that placed Daryl Hall and John Oates in a position that was about as homoerotic as anything short of the two of them buck-naked and grinding on each other -- faces just inches apart, staring each other down, with what I can only assume is sweat literally dripping off them. Throw in Oates's trademark pornstache and it really completes the picture. I don't actually have any tracks off of 1988's Ooh Yeah! in my collection -- and, given the album's lackluster sales, neither does anybody else, most likely -- but the cover ambience is similar, if not quite as blatantly sexual: There's John Oates again, pornstache as robust as ever, and matched to a shaggy below-the-shoulder hairstyle that's probably an exact copy of whatever Cher was wearing at the time; on the other side is Hall, pensively gazing over at Oates's wondrousness as if to say, "Well hel-lo, sailor." Surrounding it, of course, was the requisite 1980s geometric foofaraw and that pastel-y light-blue-seafoam-green color that covered nearly everything that decade but mercifully died out around the time Operation Desert Shield started. You might be surprised to know, however, that Hall and Oates are still putting out albums, and their covers have gotten a little less, shall we say, suggestive. 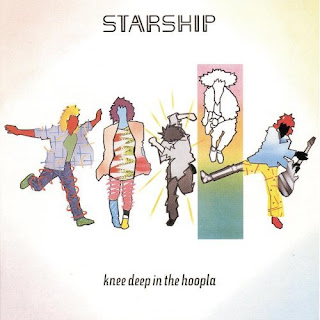 Starship, Knee Deep in the Hoopla (1985)
At first glance, this cover doesn't look that tragic, but then it starts to dawn on you that this is the same band that used to be Jefferson Airplane, and you start asking yourself some uncomfortable questions. Like, why are the godfathers of '60s psychedelic rock represented by goofy little cartoon characters from a children's book? And why are they wearing pastel colors? Even Iggy Pop had the sense to stick with basic punk-rock black, even as he was trending top-40 commercial himself in the mid-1980s. Sadly, the candy colors on the cover of what was technically the debut of Starship (as opposed to Jefferson Starship or whatever had come before) were merely a taste of what lied within, a shocking plummet from seminal rock songs like "Volunteers" and "White Rabbit" to "We Built This City." And this was still two years before they did the theme song to "Mannequin."

Ahh, that was a fun trip down Memory Lane, wasn't it? Here's the Ten:

Have a fun weekend, guys . . . put your own Random Tens and favorite '80s albums (or just the ones with particularly goofy covers) in the comments.
Posted by Astronaut Mike Dexter at 7:58 AM

Very nice, Doug. Takes me back a couple of decades to my elementary/middle school years.

I once read an interview with a rock critic where they asked him what his favorite album cover was. He was at first offended by the inanity of such a question, insisiting that there are far more compelling issues to cover in the world of rock n roll. Then he acquiesed and went with Country Life by Roxy Music. I think he was right.

That Starship cover is awesome!

Ahh ... the 80s. Even the metal bands got into the bad album covers. Worst offender of all was Poison with their first album "Look What the Cat Dragged In." All four members in the glam makeup, one in each corner of the cover, all making bedroom/do me eyes at whoever is looking at them. I still own this album. *Shudder*

I'm convinced that, when the inevitable "Manny Being Manny: The Manny Rameriz Story" comes out, Donald Faison must play the role of Manny. Throw a dreadlock'd wig on him and they look eerily similar.
Now, behold my "it's rainy/foggy outside" 10:
1. Subtle - "A Tale of Apes pt. 1"
2. Fates Warning - "Still Remains"
3. Ryan Adams - "Memories of You"
4. Portishead - "Glory Box"
5. Rachmaninoff - "Piano Concerto #2"
6. Opeth - "Hope Leaves"
7. Oceansize - "Women Who Love Men Who Love Drugs"
8. The Darkness - "Street Spirit (Fade Out)"
9. Kaddisfly - "Campfire"
10. Estradasphere - "A Corporate Merger"

Um, wait a minute - you're not inferring "We Built This City" is anything less than a stellar addition to the annals of rock and roll, are you? ARE YOU?

I know what I'm waking you up with every morning in Arizona. Well, that and "We Built This City."

Doug, Doug, Doug. You and your '80s pop. One of these days I'll own a turntable again and put my entire collection (it's a big one) of 12-inch extended dance remixes of '80s hits into digital format. Really, you can't truly appreciate the decade until you've spent time with the original extended mixes of Animotion's "Obsession", Billy Idol's "Flesh For Fantasy", The Eurythmics' "There Must Be An Angel (Playing With My Heart)", and Don Henley's "All She Wants To Do Is Dance". And that's just scratching the surface. And yes, I also have "We Built This City". Sigh. I ask again, why didn't someone tell me sooner?!?!

I owned most of those "albums" except I had them on 8 track. That was before the world of music was revolutionized by cassettes.