The Friday Random Ten+5(+1) wishes you would just can it already.

Just because football season has arrived and I'm in a good mood and stuff doesn't mean I don't think that quite a lot of you are idiots. This week's +5: Five Things That Just Need To Stop, Right Now. 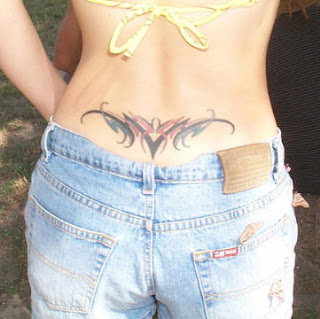 Lower-back tattoos
When I first inveighed against lower-back tattoos right around this time last year, fellow Dawgblogger Kyle King expressed mild shock. Yes, I know that given my weakness for somewhat trashy women, I should probably get turned on by what my sister refers to as a "buttstache" or "tramp stamp," but here's my big problem with them: They're the very cruelest kind of mirage. See, one of the biggest cheap thrills in a typical guy's day is catching a glimpse of thong that has snuck its way up above a woman's jeans, and when we first get a glimpse of an LBT, we think that's what we're seeing. But then we realize it's just a stupid-looking tattoo, we're no closer to finding out what kind of panties this woman wears than we were ten seconds ago, and we're disappointed. Ladies, I assure you that whatever you're trying to accomplish with a lower-back tattoo can be accomplished every bit as effectively with a strategically revealed G-string -- also more cheaply, and with less physical pain. 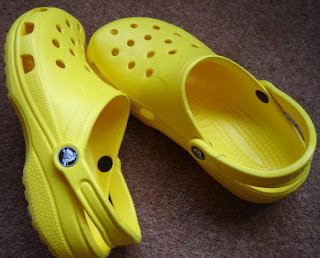 Crocs
Every year there's some new stupid trend in footwear: There were Ugg boots, then there were mukluks, and now we have Crocs. When Crocs first started becoming popular, I honestly thought they were the same kind of rubber shoes that the corrections system gives to prison inmates, and that people were wearing them to earn some kind of thug cred or something like that. Only later did the awful truth dawn on me -- this is just one of those things, and people apparently want to look like state prisoners for no reason at all. These shoes are so ugly that just thinking about them makes me shudder. And no, I don't care how comfortable they are; for the past three weeks of triple-digit heat here in Birmingham, walking around completely naked would've been the most comfortable thing imaginable, but somehow nobody cut me any slack when I tried it. Maybe my mistake was showing up at the Mountain Brook High School cheerleader tryouts like that. Yeah, that's probably where I went wrong. 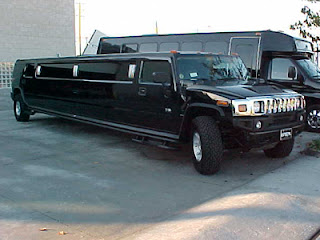 Hummer stretch limos
Limousines are wasteful. For all their size, aside from a little more legroom and a mini-fridge just big enough to hold a couple cans of Schlitz, they offer little more than what you could get in a standard-length Mercedes S-Class. Hummers? Also wasteful, for reasons I shouldn't have to enumerate at this point. So I guess it was only a matter of time before someone decided to combine the two in an ultra-wasteful orgy of vehicular conspicuous consumption. What nobody could have predicted, however, was the Hummer limo completely replacing the standard Lincoln or Caddy stretch as the de rigueur pimped ride for everyone from hip-hop stars to overprivileged high-schoolers to partying bachelorettes. It was novel the first few times, I guess, but now when someone sees a Hummer limo, all they think is "dipshit" -- pretty much the same reaction people have to a regular-length Hummer these days, I suppose, only thrice as intense, proportional to the limo's greater size. Give me a plain old Bentley Continental Flying Spur any day over this rolling monument to unrestrained douchebaggery.

High-waisted jeans
Look, I understand where this is coming from. After years of watching waistlines sink lower and lower, until a "muffin top" became something entirely different from what Elaine Benes was trying to sell at Top O' the Muffin To Ya! and a bikini wax became virtually mandatory just to put a pair of jeans on, it was surely only a matter of time until some opportunistic designer sensed the time was ripe for backlash and proceeded to yank waistlines back up into the vicinity of a woman's armpits. But good Lord, isn't there some kind of happy medium here? Did they really have to go as far as bringing back Mom Jeans? And doesn't this look kind of, you know, uncomfortable? 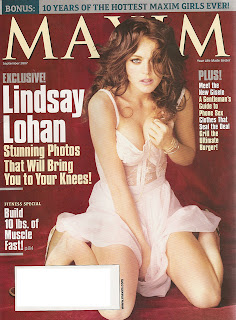 Maxim magazine
Full disclosure: Once upon a time, around the fall of '99, I became a Maxim subscriber. I was 21; it was what 21-year-old guys did. It wasn't long, however, before the magazine wholeheartedly transformed itself into the male Cosmo that everyone feared it had pretty much been all along. And they unequivocally jumped the shark this past spring, of course, by naming Lindsay Lohan -- who was already well-established as a spoiled, coked-out skank -- the hottest of their "Hot 100" for 2007 (just days after the supposedly rehabbed starlet was spotted passed-out drunk in the passenger's seat of a friend's SUV). But bizarrely, even after a May DUI arrest and the infamous chasing-the-former-assistant-in-a-car incident a couple months later, Maxim went ahead and put LiLo on the cover (which you can see above) looking every bit as strung out as one might imagine her to be. Now, I understand that Maxim had already banked a considerable portion of their chips on Lohan with the "Hot 100" thing, so maybe this was just their way of steering into the skid, but still, even the horny teenage/college-age dudes who constitute Maxim's prime demographic wouldn't bring their pricks within 100 yards of Miss Linds at this point, which indicates to me that the mag has pretty much outlived its usefulness. As for me? My subscription lasted all of one year, and then, as men are wont to do, I put away childish things. And stuck with Esquire, who knows a hot chick when they see one.

Ahh, I feel better. And now the Ten:

And no kidding, this is what came up next, a bonus 11th:

11. Willie Nelson, "Mamas, Don't Let Your Babies Grow Up To Be Cowboys"

Damn straight, Willie. Whether you're Bulldog, Cowboy or anything else, feel free to leave your own rants, Random Tens, or Random Elevens in the comments.
Posted by Astronaut Mike Dexter at 7:59 AM

I can't stand those damn crocs either. The pinnacle of disaster for me was when they started advertising the damn things on the big screen in Sanford last year. I went ape shit the first time I saw it. First crocs are ugly and second, why the hell are the Bulldogs advertising anything with an alligator (close enough anyway) as a logo. By the end of the season I had most of the people sitting around me booing without my promting everytime those damn ads came on. Glad someone else hates them too.

About two years ago, I found myself in the back of a stretch Hummer limo with, no shit, two Backstreet Boys. I'm completely serious.

It was an odd night.

I'm so glad I'm not the only one who thinks she looks strung out. Our copy came in the mail and my first comment was "which editor did she steal the coke from for this shoot?" My husband, as he was putting it out to recycle, said, "We used her and now we're dumping her a week later. She should be used to that."

Given her rate of consumption, LiLo must surely be leaching pure alcohol through her skin. If that's the case, then she has a self-sanitizing cooch, which would make it more of a mental health hazard to mate with her.

My thing that needs to stop: girls in ridiculously big sunglasses, especially the big round ones. I don't care if everyone's doing it, you look like fucking Yoko Ono, and not one of you looks any cooler with those things on your face- aucontraire. Stop.

2. "Me And Those Dreamin' Eyes Of Mine" by D'Angelo, from 'Brown Sugar'

3. "Shoot The Moon" by Norah Jones, from 'Come Away With Me'

5. "Africa Bamba" by Santana, from 'Supernatural'

6. "Paid For Loving" by Love Jones , from 'Swingers Soundtrack'

Have a great weekend, enjoy the return of CFB, and...

I was completely with you on the Lohan thing until you supplemented me with ..Rosario Dawson. You kidding me? Different strokes, I guess.

On to the randomized iPod 10:

Now that I've recovered my equanimity:

1) Elvis Costello, Watching the Detectives
2) Queen, Killer Queen
3) Jimi Hendrix, Hey Joe
4) Bauhaus, The Man with x-ray eyes
5) Depeche Mode, Personal Jesus
6) The Specials, Too Much Too Young (live)
7) Beastie Boys, Check it out
8) The Kinks, I need you
9) Blur, Theme from Retro
10) Black Flag, I've had it

The first one that comes to mind for me is leggings. Leggings!!!
The capri-length leggings with skirt: quite possibly the most hideous things women are wearing these days.
Just what is the point in wearing a skirt when you wear those things?

But hey, go figure. I hate capris, gauchos, mom-jeans amongst other things but that really isn't stopping girls from wearing them...

A Porsche SUV? What moron spends that kind of scratch on a Porsche and doesn't get a f'n Porsche? It's dumb, stupid, and ridiculous.

GET THE CARERRA. Dumbass.

"About two years ago, I found myself in the back of a stretch Hummer limo with, no shit, two Backstreet Boys. I'm completely serious."

About 2 months ago I found myself in a Nashville bar with Jessica Simpson.

I, too had a brief Maxim subscription in the late '90s. The only one I've bought in recent years was the one with Kristen Bell. Veronica Mars baby!

It's highly suspicious if a guy hasn't made the jump to Esquire by, say, 25 at the latest.

Yeah limos are really wasteful.
It is a little bit expensive to hire it, but anyway they enjoy demand, people really like this huge long vehicles.
Whatever the reason is or the occasion is, it can be wedding, baptismal, birthday, business trip, trip with loved ones, anniversary, prom night and the like, people call limo hire companies and offer limos in order to make occasion a perfect and memorable one.

Boots and girls are so-so! But Hummer
limo, black, huge, brutal is always cool! It is the most impressive car!