A Bulldog Tempts the Wrath of a Vengeful God, Part IV: Alabama.

Before I proceed with the big Georgia-Bama battle royale, I wanted to thank those of you who've written in with complimentary words about this series -- this was kind of a leap of faith for me, not only in the sense that I'm an extremely superstitious and/or karma-sensitive person who's still not 100-percent sure that I won't be dooming Georgia to a 6-6 season by writing this, but also in the sense that this is the first time I've ever really tried my hand at some in-depth Xs-and-Os analysis as opposed to, you know, just trotting out "Simpsons" characters or regaling everyone with toaster-throwing stories. Again, thanks for your kind words, and please hit me up with any comments, suggestions, dissents or whatever as we work our way through the season.

Also, before each game this season I'll be revisiting each one of these predictions and comparing it to how Georgia's year has actually gone up to that point, just to demonstrate that, unlike most actual sports journalists, I'm not afraid to stand up in front of everyone and say, "Uh, yeah, I was wrong about that. Completely, totally, 100-percent dead fucking wrong. It's possible I might be retarded, actually. We're looking into it." 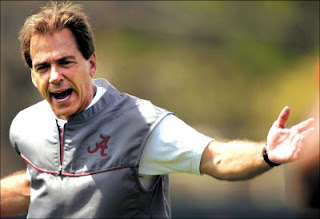 Above: Nick Saban, not having time for this shit.

Hometown: Tuscaloosa, Alabama.
Last season: Finished the regular season 6-6 (2-6 in the SEC, tied for fourth in the Western Division), then lost to Oklahoma State in the Independence Bowl, 34-31.
Hate index, 1 being an innocent newborn child, 10 being Jonathan Baker, that ass crater from Season 6 of “The Amazing Race”: Six and three-quarters. Familial connections mean I’ve always fallen on the crimson side of the Alabama-Auburn rivalry, but boy, have those Tide fans been acting like their shit doesn’t stink ever since Nick Saban’s 15-vehicle motorcade rolled into T-Town a few months ago. Plus Saban is already elbowing his way ahead of Tuberville and Spurrier for Top Conference Douche honors, and he hasn’t even coached a game for Alabama yet.
Associated hottie: Alabama has had truckloads of smokin’ coeds pass through its hallowed halls over the last 176 years, but the Alpha Female here has to be Sela Ward, who was a cheerleader at Bama in the late ‘70s. I don’t care that she’s 50 -- my guess is none of you dillwipes looked that good when you were half that age. 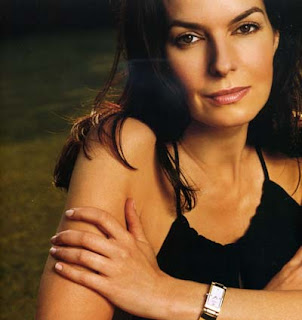 What excites me: I know the conventional wisdom is that a Nick Saban defense is supposed to make opponents instantly poop their pants and then turn into feces-smeared pillars of salt, but not only are Saban's Bama players having to adjust to a switch from last year's 4-3 defensive front to a 3-4, there are major question marks personnel-wise whether you're talking about the 3 or the 4. Wallace Gilberry and Bobby Greenwood will be powerful forces at defensive end, but in between them the Tide could end up with a guy who was the team's third-string center up until a few months ago. I've heard some impressive things about that guy, Brian Motley, but a redshirt freshman is still a redshirt freshman, and it's anyone's guess as to whether he'll be fully settled into the tackle position after only three games. Meanwhile, in the linebacking corps, Prince Hall is probably the only guy you've ever heard of. As with South Carolina, Georgia is fortunate to be catching the Tide fairly early in the season before they have a chance to jell in a couple of areas; our ground game stands to rack up some solid yards if the passing game doesn't completely collapse.

What scares me: I doubt (hope?) the passing game will completely collapse, but it'll have a hell of a time against a secondary that's really the one sure-thing bright spot in the Alabama defense. Cornerback Simeon Castille probably could've gone pro after last season, and I would be very happy if Matt Stafford doesn't throw it within 20 yards of him at any point during this fall's game.

Then there's the Bama passing attack. I'm not leaping aboard the Major Applewhite bandwagon just yet -- seems like a lot of his hype is based around one really good season at Rice, but then again, it was fucking Rice, so obviously he's got some idea what he's doing. This year he'll have plenty of talent to do it with. It kind of got lost in all the furor over Mike Shula's Gaileyesque playcalling and the Tide's red-zone narcolepsy, but John Parker Wilson's a pretty good QB, and not only do all his receivers return for 2007, he gets four of his five offensive linemen back too.

The only major question mark on this side of the ball is who's going to replace Kenneth Darby at tailback, but either Jimmy Johns or Glen Coffee could be productive in that spot if Georgia's linebacking corps can't get things turned on.

Player who needs to step up: SS Kelin Johnson. As I told the guys from the blog Roll Bama Roll in their Georgia-Alabama roundtable last month, Paul Oliver's departure from the team pretty much leaves Johnson as the veteran leader of the secondary (if not the whole defense) by default, and he'll be leading his unit into battle against what will almost certainly be a fierce passing attack. Part of Georgia's struggles last year, at least defensively, were due to the fact that there was nobody like David Pollack or Thomas Davis to be the fiery emotional spark for the unit; KJ, this is your chance to be that guy. I'm thinking kind of like Greg Blue, only without the whole frequently-blowing-right-by-the-ball-carrier-at-100-mph thing.

What I think will happen: Of all the teams on Georgia's schedule, Alabama might be the most puzzling. Obviously the upgrade from Shula to Saban at head coach has to be worth some wins all by itself, but just how many is open to debate; even Saint Nick didn't win a national title in his first year at LSU (and in fact managed to lose to UAB). And the last time Mark Richt faced off against Saban, Richt sent him out wearing tight pants and lipstick following a 45-16 blowout. So while Georgia obviously needs to show some respect when they march into Bryant-Denny on September 22, they don't necessarily need to be intimidated. The opposite extreme, of course, is that they go into the game overconfident, but I don't think Mark Richt will allow that to happen, either.

I imagine Mike Bobo will set up the run early and then give Stafford a chance to take some shots downfield; Georgia's fortunes in this one hinge to a large extent on whether Staff is the Good Matt that picked Auburn apart or the Evil Matt that handed out interceptions like they were free pigs in a blanket at Sam's Club in, well, pretty much any game from September 9 to November 4 of last year. Somehow I can see this one stacking up a little bit like the "man enough" game in 2002, which Georgia won by operating a very consistent rushing attack while preventing any of Bama's rushers from getting into a rhythm -- the Tide had Shaud Williams, Ray Hudson, and Santonio Beard for that game, but none of them broke 50 yards. This year Bama will have Jimmy Johns and Glen Coffee in their backfield, among others, but nobody's really sure whether any of those guys will yet be in a position to be a 20-to-25-carry workhorse by the time Georgia comes to town. From what I've heard, the offensive line has improved but still has some questions concerning run blocking, particularly on the right side, and that's only going to make the tailback committee's job more difficult.

My educated guess: As with the 2002 game, Georgia builds an early lead with smart QB play and by holding down the Alabama ground attack, then watches that lead disintegrate as Alabama adapts to what we're doing, but gets a big punt return late (say word Mikey Henderson) and a game-winning FG from Brandon Coutu. If Pat Dye wants to get on JOX 100.5 here in the Salty 'Ham and impugn the team's manhood again, I welcome him to do so. That actually worked out pretty well for us last time.

If you're trash-talking: Be very careful, first of all, because Tide fans don't exactly take kindly to that kind of crap. But Nick Saban's Napoleon complex offers all kinds of opportunity for vindictive satire. F'rinstance, you could point out that after going 48-26 in five years at LSU, Saint Nick was welcomed with open arms by the Miami metro area, but after crapping out with a 15-17 record with the Dolphins, the only people Saban could get to welcome him with open arms were . . . drunk-ass Bama chicks.

Make fun of my home state if you must, but man, I fucking love this place.

Up next: Ole Miss comes to Athens and they're bringin' The Orgeron with 'em! Lock your doors, shutter your windows, and don't come out until you hear the all-clear.
Posted by Astronaut Mike Dexter at 8:03 AM

Tell it to Kraft Foods, dude.

Saban's got to get help from a lot of youngsters. And build depth. And conditioning. And keep the whole team healthy.

Run blocking is oversimplified, but I expect they'll do it better most times this year, with the occasional lapses. Watch to see if Roy Upchurch gets much playing time; he looked somewhat quicker than Coffee.

Even staying miraculously healthy, I think 7-4 would be amazing. Should that happen, the hype for next year will be outta control.

Losses are bad enough, what really hurts is when your team sucks at fundamentals...!