A Bulldog Tempts the Wrath of a Vengeful God, Part III: Western Carolina. 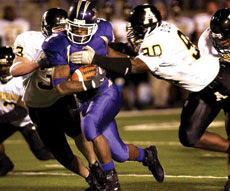 Here's something I bet you didn't know: WCU was actually ranked as high as #22 in Division I-AA last year before things kind of, you know, fell apart.

Hometown: Cullowhee, North Carolina.
Last season: Went 2-9 in Division I-AA’s Southern Conference, with their wins coming against D-II Chowan College and D-IAA Eastern Kentucky; they lost their one contest against a D-IA opponent (Florida) by a score of 62-0.
Hate index, 1 being Melissa Theuriau, 10 being Osama bin Laden: Two. Maybe closer to one and a half. If last season is any indication, “hate” would be wasted here; it’s more like “pity,” really.
Associated hottie: The ”Distinguished Alumni” list on Western Carolina’s Wikipedia page is a sausage fest for the most part, but it turns out Marianne Leek (’91), 2006 Western North Carolina Teacher of the Year, is kind of a dish: 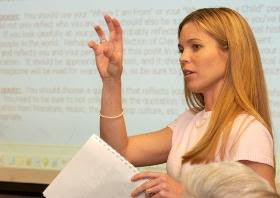 What excites me: I'll be honest here -- the Internets are not exactly bursting with objective information about the Catamounts. But I do know a few things: WCU hasn't been to the D-IAA playoffs since 1983, and in the last eight years, they've had only two winning seasons (one of which was only a nine-game schedule, for some reason). In the last five seasons, they've played six D-IA opponents and lost all six times by an aggregate score of 265-26.

The most recent of those, Florida, scored an average of 27.2 points against D-IA opponents in 2006; against WCU, they managed to drop a 62-bomb. What this all tells me is that not only are the Catamounts a I-AA team, they don't appear to be a particularly good I-AA team, and if we don’t have our offensive starters riding the pine with more than 400 total yards under their belts by the end of the third quarter, we’re not even trying.

What scares me: Oddly enough, what scares me about this game has nothing to do with the Catamounts and everything to do with the Dawgs themselves. The Dawgs run the risk of falling back into what has become a fairly standard M.O. against demonstrably shitty teams over the past few years: Score early, get everybody worked up, and then dumbfuck around for the rest of the first half; go into the locker room carrying a suspiciously average-sized lead, then finally turn it on in the second half to make it a somewhat more respectable-looking blowout. I know you don’t like running up the score, Mark, but seriously, there’s nothing wrong with going into halftime up 38-0 or something. It’s not like we’re not paying them an assload of money to come down here in the first place.

Player who needs to have a big game: WR Mohamed Massaquoi. MoMass’s rough season in 2006 was kind of indicative of our WR unit’s struggles as a whole, and numerous eyes will be on him to gauge whether things are getting any better. I would expect Georgia to open up the offense in the first half if for no other reason than to get Stafford off the field as soon as possible, so Mass has got to make the most of those opportunities.

What I think will happen: One of two things. If Georgia plays to its full potential, we should win this thing by 50 points; if instead we hew toward the scenario I described above, it’s 20-7 at halftime, 44-17 final. At least there won’t be a spread for us to not beat.

If you’re trash-talking: Unlike Marianne Leek, nutcase right-wing explosives enthusiast Eric Rudolph won’t be making the Catamounts’ Distinguished Alumni list anytime soon, but he did attend WCU for a couple semesters in the mid-‘80s after getting his GED. True story.

Up next: A battle royale with Nick Saban and the Crimson Tide in T-Town. Will the Dawgs be . . . man enough?
Posted by Astronaut Mike Dexter at 7:39 AM

what do you think about two of spurrier's recruits being denied admission to sc for not meeting academic requirements? should the administration change the process?

I'm not really sure because I don't know enough about how recruiting works. I mean, if those two guys didn't qualify relative to South Carolina's admission standards, then I don't see what Spurrier's beef is -- he shouldn't have offered them scholarships if there was some question whether their academics were up to snuff. But maybe there's something else going on here that we don't know about. Obviously I'd be interested to hear what that is, and I'd be interested in hearing from anyone else who knows more about college admissions and athletic recruiting than I do.

I have no idea about the SC situation in particular, but it seems like time and time again, one school won't take someone, but they can get admitted easily at another. There are several UGA examples that obviously have nothing to do with NCAA satndards, but everything to do with the school internally. To me, if these guys qualify by NCAA standards, and by SEC standards - i.e., they can go to another school like Arkansas - then Steve has a beef. After all, no one has accused SC of being the Harvard of the south. But if these guys have to to Hargrave or some such place to meet requirements because they couldn't get a test score, well, that's just the way the recruiting cookie crumbles.

Didn't Bowden (Clemson) get into a mess like this about 2-3 years ago?

I can't look at the picture of Marianne Leek without thinking that the original caption is something like "Rrraaaaahhhh! I'm a tiger!!"