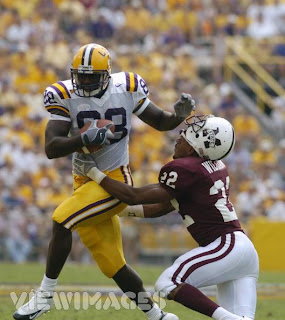 Metaphors for Mississippi State's '06 season don't come much clearer than this.

• Football season is back, and now I can feel whole again. The season kicks off tonight with LSU at Mississippi State, and tomorrow I will be headed over to Georgia for the Bulldogs' home opener against Oklahoma State. Once again, I will be a hanger-on at the world-famous Tent City tailgate, and once again, Jenna the Wonder Terrier will be in tow. Georgia people, if you're going to be up in Athens for the game, shoot me an e-mail -- I want to meet some of the yahoos who post comments on this site. You can even get your picture taken with Jenna, which is almost as good as getting your picture taken with Uga and way better than getting your picture taken with a smashed-up old car. 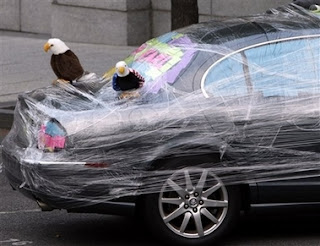 • Dear Washington D.C. pranksters: Whichever one (or ones) of y'all pulled the wrapping-Karl-Rove's-car-in-cellophane prank, you did it wrong. You're supposed to a) soak the cellophane in gasoline, b) run a length of it down into the gas tank, and c) take the end that's still protruding from the car and light it on fire. Buncha amateurs is what you guys are.

• Whatever happens this season for Georgia's football team this season, it will still be great to be a Georgia Bulldog: We came in at number five on The Princeton Review's annual ranking of Top Party Schools and number one in Kirk Herbstreit's rankings of the schools with the prettiest coeds. And nobody can take that away from us. When we say "It's great to be a Georgia Bulldog," we have our reasons.

• Georgia Tech did not appear on either list -- I'll give you a few moments to recover from the shock -- but nevertheless, the guys at Ramblin' Racket have assembled a guide for ladies seeking to be "the perfect football game date." This link is not meant to be any kind of endorsement; it is strictly for informational purposes. Actually, I'm just curious to see how my sister -- a proud feminist and equally proud UGA alumna -- reacts to it.

• Also up: Preseason BlogPoll v2.0 at MGoBlog, and the return of our unscientific, frequently alcohol-fueled, wild-ass-guess-laden weekly SEC predictions at Fleabomb.com.

• Speaking of Fleabomb, Stanley has a pretty hilarious compendium of prominent Republicans and their furtive forays into the brave new world of Teh Ghey, complete with "Beard Status" ratings for several of their supposed heterosexual life partners. Now, before I get any indignant right-wing "But I thought you liberals were supposed to lurrrrve The Gays!!1!1!" comments, let me just say that no, we liberals do not have any problem with The Gays. We think they have the exact same right to form loving relationships with their chosen partners as we straights do. But when a prominent conservative rails against homosexuality as evil incarnate in public, only to be discovered prowling public restrooms asking for a mouthful of undercover cop, that's what's called "hypocrisy" and it's hilarious. And the irony is, if only these guys would stop condemning homosexuality and allow gay couples to conduct their relationships without shame, then they, too, could come out of the closet and pursue cock the conventional way, without resorting to complicated foot-tapping signals in the crapper. But I suppose that day may never come. 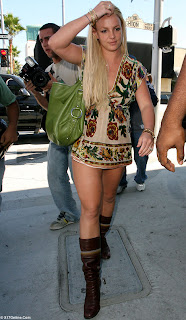 • Two things I'd like to point out to Britney Spears:

2. Even if it was, that doesn't automatically mean you should wear it.

I have declined to post the full-length rear-view photo, which would perch this blog unsteadily upon the cusp of NSFW, but if you're really that hungry for cottage cheese, click here. For the first time all week, I can kind of sympathize with Larry Craig a little, because the sight of Britney's ass might be enough to turn me gay, too.

This woman has children, ladies and gentlemen.

• Know who else has children? Denver Broncos running back and former Tennessee Vols star Travis Henry. Oh, lordy, does he have children.

Henry, 28, has fathered nine children by nine women in at least four Southern states and has been ordered by various judges to provide child support for seven of them, according to court records involving one child living in DeKalb County.

Records show that Henry's children are scattered across both the American and National Football Conferences -- including Florida, North Carolina, Tennessee and Georgia. Wellon said Henry talked about gathering them together to watch him at training camp. Indeed, part of the custody arrangement Henry reached with Beacham requires two weekend visits when he is playing pro ball.

Good. Freaking. Lord. Nine kids by nine women? If I'd managed to impregnate every woman I'd ever slept with, I might be up to nine kids right now. But I don't know. At any rate, it appears that sex ed isn't a big part of the UTK curriculum, though being Tennessee, they probably just give incoming freshmen a pamphlet that says "hands off your sister" and leave it at that.
Posted by Astronaut Mike Dexter at 6:16 PM

You gotta love the fact that 8 of the 10 hottest co-ed schools were in the SEC. I miss the South...

You warned me not to look at the other Spears photograph, but did I listen? Yikes. Good thing you had the picture of various Georgia belles to cleanse my poor imagination.