A Bulldog Tempts the Wrath of a Vengeful God, Part XI: Kentucky. 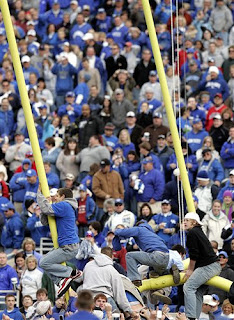 Good for y'all and everything, but all things considered, I'd rather Georgia not be the cause of stuff like this.

Hometown: Lexington, Kentucky.
Last season: Rolled to a fairly shocking 8-5, third place in the SEC; notched upsets over Georgia and Clemson (in the Music City Bowl).
Hate index, 1 being Ben & Jerry's crème brulée ice cream, 10 being Hitler: Three and a half, maybe four. I know I should despise them for knocking us off last year, but one of the best bosses I've ever had was a Kentucky alumna -- this woman helped make Lynchburg, Virginia, tolerable for a few months when I worked there after college. Once she left, of course, I didn't stand a chance, but nevertheless, UK gets a pass from me. Unless they beat us again this year, though, in which case I'm logging on to uky.edu to see if they have a suitable clock tower.
Associated hottie: No surprises here -- Ashley Judd gets props for being magically delicious and for being a loyal supporter of all things Wildcat athletics, including their hoops team (obviously) but also their hockey team: 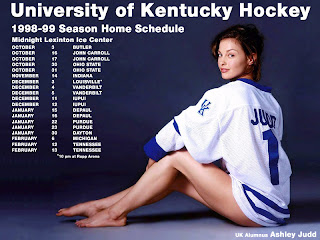 You know, you're right -- I don't know why you should necessarily have to wear pants to a hockey match, either.

What excites me: Even while they were blowing Bulldog Nation's collective mind up in Lexington last year, the Wildcat defense didn't exactly qualify as Steel-Curtain-like. They gave up 389 total yards to a Georgia offense whose shit was clearly still not together, and finished with a triple-digit ranking nationally in rushing defense, passing defense, and total defense; they did manage to poke their heads up into double-digits with a #99 ranking in scoring defense, thanks to a second-in-the-nation turnover margin, but even then I think it's safe to say they ain't gonna be +15 two years in a row.

The good news is, eight starters from last year's defense come back; the bad news is, see preceding sentence. Linebackers Wesley Woodyard and Braxton Kelley are pretty good, but nobody else on this side of the ball qualifies as any better than "acceptable." The D-line has a couple decent starting DTs but absolutely no depth behind them, while the secondary that was so awful last year still doesn't appear to have things sorted out. Oddly enough, defensive coordinator Mike Archer got hired away by N.C. State after last season -- apparently Tom O'Brien wasn't too turned off by the words "coordinated the 118th-ranked defense in D-IA" appearing on Archer's résumé -- and to replace him the 'Cats promoted Steve Brown, who, as defensive backs coach, “masterminded” that 118th-ranked pass defense. I understand about wanting to maintain continuity of leadership, but jeez, people.

On the other side of the ball, the offense that everyone raved about last year will have to replace three linemen, with the right side of the line being of particular concern. This, too, has been the subject of extended tinkering over the course of the summer, and while it may get sorted out by the time they roll into Athens on November 17, QB Andre Woodson should be prepared to take some pretty vicious hits until then.

What worries me: The skill players on that offense, of course. Woodson has been heralded by nearly everyone as the SEC's most proven passer; RB Rafael Little is a threat to both run and catch; and the entire corps of receivers is blazingly fast. Everyone’s immediate knock on the Wildcat offense is that they weren't quite so prolific in '06 against defenses that actually had a pulse -- against Florida, South Carolina, Tennessee, and LSU, they came up with a total of 36 points -- but that can only come as so much relief to a defense as green as Georgia's is going to be. Georgia hasn't lost at home to Kentucky in 30 years, but that doesn't mean it couldn't happen again this season.

Player who needs to step up: FS Reshad Jones. Of the new starters on Georgia's defense, few have been touted more highly than Jones, both as a recruit and as a Bulldog attempting to work his way into the starting lineup; he had a pretty solid summer outside of a knee injury, and I've got to think the coaching staff will be trying to get him as much action on the field as possible. He's got the speed to hang with pretty much anything Kentucky throws his way, and the Dawgs are definitely gonna need that.

What I think will happen: Between the home-field advantage and the fact that Kentucky isn't going to be sneaking up on anybody this year, I'm probably more confident about Georgia getting its revenge in this game than I am with respect to, say, Vanderbilt. Though as with Vandy, revenge-lust alone isn't going to put a mark in our W column. Statistically speaking, Kentucky's offense hardly blew us out of the water last year (204 yards passing, 147 on the ground), but particularly late in the game, they always seemed to be able to come up with a first down when they needed one. That was a recurring leitmotif of Willie Martinez's defensive schemes last season, at least until we put Auburn’s nuts in a vise the week after losing to UK, and it's something people will expect him to have sorted out in '07.

The good news, of course, is that if Matt Stafford has really advanced as a quarterback as much as we think he has, Georgia will virtually be able to name their score. Kentucky hasn't fielded a decent defense in more than a decade, and it's not gonna suddenly happen this year, not with a new coordinator having to sort out the disaster that last year's unit was. My vision of this game is something along the lines of 2002: Kentucky will hang with Georgia for the first half, with the two teams putting together a nice little 30-minute shootout -- but Georgia will make the kinds of halftime adjustments we didn't start making until the very tail end of last season, start attacking the Wildcat offensive line with a vengeance, and pull away. There is the danger of us looking ahead to the Tech game the following week, but I think that’s balanced out by a desire to redress last year’s humiliation in Lexington. I wouldn't necessarily bet money on Georgia hanging "half a hundred" on the 'Cats like we did in '02, but if Louisiana-Monroe could put 40 on them last year, then by God, we should be able to.

If you're trash-talking: OK, so Georgia lost to Vanderbilt and Kentucky last year. Go ahead, I've heard all the jokes. But part of the reason people made so many jokes about it was that losses of that magnitude are so uncharacteristic of the Bulldogs; Kentucky, on the other hand, has a solid tradition of absolute stinkers under Rich Brooks that one Music City Bowl win isn't quite going to wipe away all by itself. A sampling:

2003 -- At 4-5, Brooks's first UK team is actually doing better than some predicted, and with a win over 1-9 Vanderbilt, they'll be a game away from bowl eligibility. Not so much: The 'Cats get popped 28-17 by Vandy and drop their final three games.

2005 -- One week after needing two late touchdowns to beat D-IAA Idaho State, UK gets shellacked 38-14 by Indiana. This, you'll recall, was the season in which Lexington radio station WKQQ erected billboards of on-air personality "Kitten" and offered to remove an article of her clothing for every game the 'Cats managed to win; Kitten only got down to her bra and jeans before community leaders called shenanigans and ordered the billboard taken down, but it hardly mattered, since that was as naked as she was ever going to get.

Even last year, the Wildcats' best season in what seems like forever, they had to survive shootouts against Central Michigan (45-36) and UL fricking Monroe (42-40). You got us last year, boys, but in the grand scheme of things I think we all know who's got the less embarrassing football program.

Up next: We close out the season with Georgia's hated rivals from over on North Avenue, the Yellow Jackets of Georgia Tech. If you've just joined our coverage, we're going for seven in a row.
Posted by Astronaut Mike Dexter at 8:22 AM