A Bulldog Tempts the Wrath of a Vengeful God, Part VII: Vanderbilt. Vanderbilt football: Straight-up schoolin' sucka punks who think they know what's up since about, oh, 2005 or so.

Hometown: Nashville, Tennessee.
Last season: Only went 4-8, 1-7 (last place) in the SEC – but of course we all know whom that one win came against.
Hate index, 1 being “Ferris Bueller’s Day Off,” 10 being “Bad Boys II”: 4.5. They were close to a 1 right up until they beat us last year on fucking Homecoming; they’re still too hard-luck to hate, but I wouldn’t mind seeing one of them get dismembered by the Dawgs up in Nash Vegas this year.
Associated hottie: Molly Sims (of Sports Illustrated swimsuit issue and “Vegas” fame) went to Vanderbilt for two years, and was a Tri-Delt, no less. She left to pursue her modeling career before actually graduating, but who needs a diploma when you look like this? 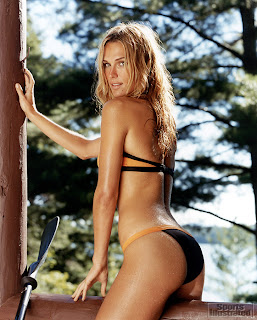 What excites me: The Commodores’ defense has improved fairly steadily over Bobby Johnson’s five years in Nashville, but it’s still not what you’d call a worldbeater (they finished 74th in the country in total defense last year, giving up around 352 yards a contest), and it looks like their primary weaknesses will once again be on the defensive side of the ball in '07. Just for starters, the 'Dores were 91st nationally in rushing defense (150 yards per game) and 94th in pass-efficiency defense.

With eight guys coming back, that defense should be stronger in 2007, but only two of the returners are on the defensive line. If Georgia's O-line has come together at all by midseason, the Dawgs should be able to put up some rushing yards on the Commodores -- they’ve averaged 175.5 yards on the ground over the last four games in this series, though that’s bumped up some by a spike in rushing yards in the 2004 blowout. And last year, Thomas Brown had 75 yards (6.8 ypc) just in the first two quarters before blowing out his knee returning the second-half kickoff; Georgia's three-headed rushing game should put up even better numbers this year.

If the defense was merely “mediocre” in 2007, though, the special teams qualified as “abysmal.” The ‘Dores averaged just 33.5 yards per punt (86th in the country), and weren’t particularly good in the return game, either (17.9 yards per kick return and a pitiful 4.7 yards per punt return, both in the bottom fifth of Division I-A). The new NCAA rule moving kickoffs back to the 30 yard line from the 35 may not affect Georgia too much to begin with, for reasons that Paul Westerdawg outlines, but against a return game this anemic, it might matter even less.

What worries me: Try Vandy’s entire offense. For all the hype over their upset of Georgia and their achingly close losses to Alabama, Arkansas, and Florida, they were “competent” as opposed to “spectacular” last year, ranking 52nd in the country overall in total offense and within a stone’s throw of that ranking in most of the individual categories -- but all I can remember about the Georgia-Vanderbilt game is how they always seemed to manage a big first-down play when they needed one, either on the legs of mobile QB Chris Nickson or with an amazing catch from wideout Earl Bennett, who could start for pretty much any team in the country at this point. Particularly against a defense as inexperienced as Georgia’s is going to be, this should be raising red flags throughout Bulldog Nation.

Player who needs to step up: WCB Bryan Evans. Obviously it's still way early, but if I had to guess I'd say Evans is the guy most likely to be assigned to Earl Bennett. Now, when you get right down to it, Chris Nickson might be more dangerous as a runner than a passer, but when he does pass, Bennett's more than likely going to be the target, so Evans is going to have his work cut out for him.

What I think will happen: After the 2006 season ended, I would’ve predicted this as a blowout Georgia win based on sheer bloodthirsty revenge-lust alone. The more I find out about Vanderbilt, though, the less confident I am that that’ll be the case. Outside of a few recent and nationally recognizable stars like Jay Cutler and Earl Bennett, Vanderbilt has never been a treasure trove of name-brand talent, but the overall skill level in Nashville has steadily increased during Bobby Johnson’s tenure, as has the level of discipline; thus the painfully closes of years past are starting to turn into actual upsets.

At the same time, though, it’s possible that upsets such as Tennessee ’05 and Georgia ’06 are getting so much attention that we’re ignoring some other facts about the Commodores -- namely, that they’re still pretty mediocre when judged against the rest of the SEC, at least as far as the statistics are concerned. This kind of got lost in the stunned silence that enveloped Athens in the wake of last year’s upset, but the VU offense really only mounted two sustained scoring drives against the Dawgs -- one of them, of course, being the winning FG drive at the very tail end of the game -- and ended up with only 291 total yards on the day. The real damage was done by Georgia, who shot themselves in the foot with stalled drives and fraidy-cat playcalling on offense. Greater consistency at the QB position should solve the first problem to some extent, and the playcalling will almost certainly experience a change of pace with Mike Bobo in charge of the offense.

Still, the effects of 18 returning starters, 10 of them on offense, can’t be ignored, and the Dawgs had better be prepared for another Vanderbilt squad that, on paper at least, is eminently capable of keeping up with them on the scoreboard. Georgia will almost certainly have better luck scoring on the ‘Dores than they did last year, but the ‘Dores will also be moving a lot more quickly against Georgia’s defense, and though Georgia’s superior ground game should allow them to hold a late lead, I don’t see Vanderbilt ever falling behind by enough to quite make that lead feel secure. My guess is that Georgia wins by the kind of single-digit margin that would’ve been considered embarrassing a few years ago but that will look better and better as the Vanderbilt program improves; conversely, if the Dawgs think they can win on revenge alone, they’ll be in big trouble.

If you're trash-talking: I feel a little churlish smack-talking a team that handed Georgia probably its biggest embarrassment of the Mark Richt era, but once-every-season upsets aside, when you look at Vanderbilt you're still looking at the Dexys Midnight Runners of the SEC, a group that hasn't done anything noteworthy since 1982 (the year Vandy last won more than three SEC games, had a winning season, and went to a bowl). They've averaged a mere three wins a season whether you're talking about the last decade or the five years of it that Bobby Johnson has been the coach.

But to me the funniest thing about the Commodores is that Vanderbilt's founder, Cornelius Vanderbilt, was never actually an officer in the Navy; he just wanted people to think he was, and insisted that people call him "Commodore." And that's how VU got its nickname when it was founded in 1873. That's like me founding an institution called Gillett University and calling its football team the Fightin' Academy-Award-Winning Sex Machines.

Up next: Those crystal-football-fondling sons of bitches from Florida. I may be too filled with rage to even write anything.
Posted by Astronaut Mike Dexter at 8:49 AM