BlogPoll roundtable #1: "I don't fancy yours much."

The BlogPoll has begun and so has the semi-regular pollsters' roundtable, which this week asks a bunch of sports bloggers who have just gotten done assembling their fumbling, wild-ass-guess-heavy, and generally erratic preseason rankings two very simple questions: 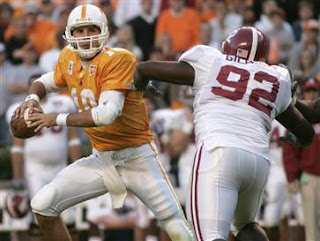 This was a tough question to answer, because I'd look at a team in the BlogPoll, think "Hmm, that ranking seems a little steep," and then go back to my own ballot and find that they were only a couple spots higher than where I myself had put them. So I guess what you can take away from this is that I'm already subconsciously bailing on my own preseason ballot (though, in my defense, I did already inform you that it sucked).

At any rate, it looks like the team with the biggest gap between where I put them on my ballot and where they ended up on the BlogPoll is Tennessee, checking in at a not-unrealistic #17 in the poll but nowhere to be found in my own rankings (unless you count them in an "others receiving votes" sort of way, in which case they'd technically be 28th). Between that and my, shall we say, somewhat skeptical preview of the Vols from a couple days ago, I've no doubt karmically doomed Georgia to getting 70 points dropped on them in Neyland Stadium this October, but be that as it may, there's a lot about Tennessee that just doesn't impress me as much as I thought it would.

The conventional wisdom is that David Cutcliffe has singlehandedly raised the Vols' offense from the dead, and compared to their rock-bottom performance in 2005, that's certainly the case -- but toward the end of last season I think we saw the team hit a ceiling in terms of just how much Cutcliffe could do all by his lonesome. He couldn't work wonders on the running game, which ground to a virtual halt over the second half of the season behind an underperforming offensive line, nor could he exert much influence over a pass defense that was also showing a little wear and tear down the stretch. All of those are likely to remain sore spots in '07, with tailback LaMarcus Coker's status still up in the air and Jonathan Hefney the lone returning starter in the secondary; even if Cutcliffe could do something about that, he'd be up to his eyeballs with a brand-new receiving corps and a quarterback who's got an off-season surgery to recover from.

I'm not saying I see another backslide to a five-win season or something similarly disastrous, but neither do I necessarily think much improvement is in the cards for the Vols this year. They won nine games in '06, which was great, but there's absolutely no guarantee they'll match that this time around. 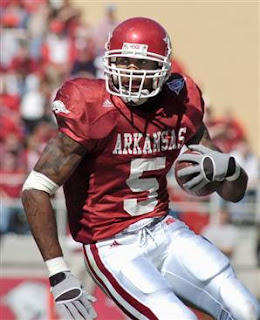 I would say Virginia Tech (#8 in the poll but #2 on my ballot, making me more higher on the Hokies' chances than any voter except for Dan Shanoff, who quite ballsily put them in the top spot), but in retrospect I can't blame the rest of the voters for not sharing my cockeyed optimism that Sean Glennon will have somehow transmogrified into a satisfactory quarterback by the beginning of the season. So I guess I'll say Arkansas, who's hanging around at #20 in the poll (I put them up at #13). Yeah, I know they have only three returning starters in the defensive front seven and only two back on the offensive line, but isn't Houston Nutt the guy about whom we always say "he does more with less than anyone in the SEC"? And honestly, how much of an offensive line do Darren McFadden and Felix Jones really need? The Razorbacks' silly soap opera of an off-season is surely giving some people pause as well, but to believe that that's enough to derail their 2007 season, you'd have to believe that Mitch Mustain and Gus Malzahn really were at the heart of the team's surprising success last year -- a belief that, as far as I can ascertain, is not shared by anyone outside of the Hogs' batshit-crazy fan base.

The real reason to doubt the Hogs' success in 2007 mainly has to do with the fact that, unlike last year, they will be sneaking up on precisely nobody -- but even then, I can honestly say I would not be surprised if they were 11-0 when they roll into Baton Rouge for their regular-season finale. I do think they'll manage to lose a game somewhere along the line; I'm just having a hell of a time figuring out where.

Runner-up in this category is Oklahoma State, a solid #22 on my ballot but ultimately unranked (technically 32nd) in the overall poll. I can't pencil them in for a serious run at the Big XII title until they muster some sort of defense, but as a Georgia fan I can honestly say there are few teams on the Dawgs' schedule this year (maybe only a couple, actually) that scare me more. As I've mentioned, they were the only team other than Boise State to average more than 200 yards per game rushing and passing last season; you maintain that balance and even a so-so defense will get you into a bowl game. I can only pray that they'll fall short of beating Georgia in the opener, but my guess is they'll ruin someone's shot at a Big 12 title game berth later on in the season.
Posted by Astronaut Mike Dexter at 6:01 PM