A Bulldog Tempts the Wrath of a Vengeful God, Part VIII: Florida. 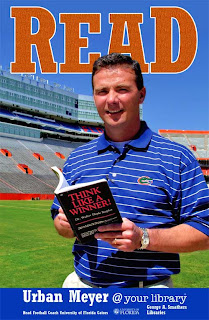 Urban Meyer, raising the bar for academics in the UF football program.

Hometown: Gainesville, Florida.
Last season: Went 13-1, beat Arkansas for the SEC championship, killed Ohio State 41-14 for the national title, blah blah I’m tired of talking about this.
Hate index, 1 being the Hooters waitress I dated a couple years ago, 10 being the Delta flight attendant who stood me up at the Bridgetown Grill in Atlanta a few years before that: Ten. The only reason I didn’t pull a Spinal Tap and kick the hate up to eleven is because I do have to respect them for their prowess on the field; beyond that, I hate them. I hate them. I hope all the bad things in life happen to them and only to them.
Associated hottie: Causing further infuriation is the fact that UF has a pretty impressive resume when it comes to hottie graduates -- Erin Andrews, Kendra from the third season of “The Apprentice,” soccer star Heather Mitts, Faye Dunaway. But on top of all that, they can also claim Rachel Specter, the ridonkulous brunette from the RGX body spray ads. I want to know which UF administrator made the deal with Satan, and what exactly was promised.

What excites me: You mean besides that ad? In a strictly football sense, I’d have to say I’m optimistic about the fact that Florida returns only two starters on defense, giving them the one defense in the SEC that may actually be greener than Georgia's. Only three guys on Florida's '07 defense have ever sacked anybody at the college level; only one (Tony Joiner) has ever intercepted a pass. Urban Meyer has recruited like gangbusters, and I'd be surprised if D-coordinator Charlie Strong wasn't offered a head coaching job the minute the regular season ends, but a dearth of experience like this one is not the kind of thing a team overcomes quickly, especially not in the defense-is-king environment of the SEC.

On the other side of the ball, Florida is without a real backfield rushing threat for what seems like the bajillionth year in a row, unless you count Tim Tebow, of course. But now that Timmeh's the starting QB rather than just a short-yardage novelty act, he's going to have to throw the ball some, which is likely to cut into his busy schedule of rushing for four or five yards on third-and-one. That's not to say that Tebow is in over his head, but there will no doubt be times this year when the kid does something stupid enough to remind Gator fans just how valuable Chris Leak's experience as a four-year starter was.

What scares me: With a lightning-fast receiving corps and four out of five guys returning on the offensive line, it looks like the pieces are in place for Meyer's complicated spread-option offense to have its biggest . . . man, fuck this. We all know what the most ominous aspect of this game is for Bulldog Nation, and it's the fact that over the last 17 years, Georgia has barely been able to buy a win, much less a streak of any kind. It's at a point now where Mark Richt could dress up the New England Patriots in red-and-black uniforms, send them up against a Florida squad composed entirely of special-ed kids and Medicare recipients, and you'd still be standing there stroking your chin and going, "I don't know . . . " If the mental block was too much to overcome for a senior-laden 2002 Georgia squad that was probably the best team we've fielded since Herschel Walker, you really have to be downing some happy pills to think a sophomore QB, a rebuilt offensive line and an experience-deprived defense are going to be able to get over that hump.

Player who needs to step up: Offensive coordinator Mike Bobo. Yeah, I know he's not even a player anymore, but I already used Matt Stafford for the Tennessee preview, so hear me out. As absurd as Georgia's ineffectiveness in this rivalry has become, it's not something you can pin on the defense; in Georgia's four losses to UF in the post-Spurrier era, they've allowed 21, 14, 16, and 20 points. No, if Georgia's ever going to get this rivalry back on an even footing, it's got to start with the offense, and the issues there have less to do with talent (David Greene was only 1-3 against Florida, ferchrissakes) and more to do with psychology. Particularly over the last few years, it seems we've been playing not to lose against Florida rather than playing to win, which both a) sucks and b) is something Bobo is in a position to change. He's got to turn Stafford and the entire offense into a steel-hearted fighting force and then call the plays that will win the game rather than just lose it by a respectable margin. Can he do that? Well, in Georgia's two wins over Florida in the last 17 tries, he was under center for one and on the sideline for the other, so anything's possible . . .

What I think will happen: Man, everything sets up so beautifully for this game. Georgia's offense should be clicking by this point, whereas Florida's defense might still be working through some growing pains, meaning the Dawgs could be in a position to put some real points on the board for the first time in ages; history's on our side, too, as the last Florida team to face Georgia as defending national champions received a 37-17 bitchslapping in Jacksonville. If ever there were a year to say "We're gonna beat Florida this year" and mean it, this is the one.

But a streak's a streak, and I've already tempted fate enough with this series; I'm afraid that for this one, I just can't be That Guy. Sorry, Bulldog Nation, you can drum me right out of the alumni association for this if you want, but until I get at least a reasonably unmistakable sign from God or Allah or whoever that says otherwise, I'm saying Florida, 31-27.

If you're trash-talking: For me to trash-talk the Gators is kind of like Jennifer Anniston trash-talking Angelina Jolie, but while recent history may not be on our side here, stereotypes are. 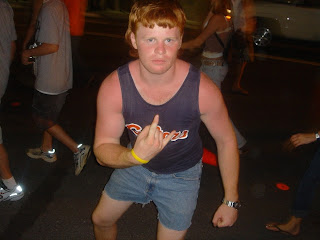 So happy over the Gators' 2006 national title that he almost forgot to beat his wife.

Stereotypes in general are bad, but what can I say? French people are rude, Asians are better at math, and Gators wear jean shorts. (They also don't zip up.)

Up next: Hey Jenny Slater salves the hurt with a get-well game against the Trojans. No, the other ones.
Posted by Astronaut Mike Dexter at 8:14 AM

The guitarist in my band, God help him, is a Florida grad. He does, in fact, wear jean shorts, and is so fond of them that he refuses to wear anything different for shows, parties, or social occasions.

You are the most reasonable Georgia fan I have ever encountered. And you're right. We're going to beat you guys again. I'm not saying that to be an arrogant prick, although, it's hard to be humble when national championships fall out of the sky and land on your trophy case every seven to ten minutes. It's just that, even though we have a lot of inexperience, you guys are cursed. And Tebow is not Doug Johnson. He's for real. I know I don't know that. But I know it.

the bigger and jortier they are..

The funny thing is that Florida fans, at least the younger ones that I've encountered, don't really even consider Georgia that big of a rival. I mean, the Cocktail Party is a big deal, and we love that we beat you, but really, Tennessee is a bigger problem. For God's sake, we worry more about South Carolina this year than the Bulldogs.

Of course, for the older fans, you guys are the rival. But for those who don't remember the 80s all that well, frankly, we don't care.

Matt and Station Agent, I initially agreed with Doug's assessment of the game, but after hearing that again my gut is telling me that we will win, and you will still wear jean shorts.

Well, I think the jean shorts factor is a wash. But it wouldn't be good college football if both fan bases didn't go into the game confident and talking shit. I wish we could play it today. Actually, lets not, because you guys would probably beat us if we played now. We need to iron out a few wrinkles first.

Grasping at straws here. The best case scenario for why Georgia will beat Florida this year: Inexperience. The young guys are too stupid to know they can't win. So they will.