A Bulldog Tempts the Wrath of a Vengeful God, Part V: Ole Miss. 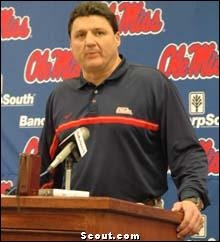 You tell Sylvester Croom that Ed Orgeron is gonna eat his family.

Hometown: Oxford, Mississippi.
Last season: Came very close to beating Alabama, Auburn, and LSU. Didn’t. Finished 4-8 overall, 2-6 in the SEC, fifth in the Western Division.
Hate index, 1 being Michelle Pfeiffer, 10 being Michelle Malkin: Three and a half. I simply can’t gin up all that much hate for a school with such a staggering level of female “talent,” but there is one thing that bothers me: I just don’t like Ed Orgeron. There, I said it! Mortal danger be damned! The Ogre knows where to find me.
Associated hottie: Trying to pick just one Ole Miss coed is like trying to pick your favorite of Sandy Koufax’s 2,396 strikeouts -- your heart’s in the right place, but really, what’s the point? Let’s just say “the whole fricking female student body” and utilize the dance team gathered below as a merely-scratching-the-surface example of same. 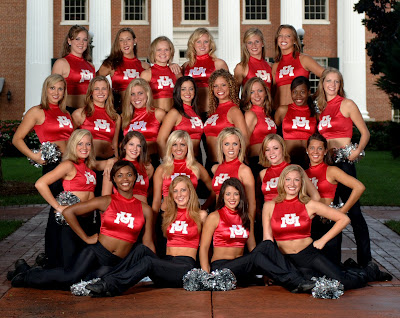 What excites me: To call the Rebels’ current quarterback situation an unholy mess would be to do a disservice to unholy messes. It was a mess this time last year, too, when it started becoming clear that Brent Schaeffer wasn’t nearly the hot hand everyone had thought he’d be when Orgeron brought the former Tennessee co-starter over from College of the Sequoias in California; after Schaeffer stumbled his way to a 9/10 TD/INT ratio in 2006, walk-on Seth Adams, a transfer from D-IAA Delta State, was thrown into the mix. Throughout spring practice, Adams pushed Schaeffer way harder than any walk-on should’ve, to the point where Schaeffer was moved to the ever-popular dumping ground for mobile QBs who can’t actually pass -- the WR position -- thus freeing up Adams to become the starting quarterback. This situation lasted for exactly one day before Schaeffer was apparently moved back to QB. At this point you could probably flip a coin and have just as solid a handle on the Rebs’ QB situation as the coaches appear to; there’s no telling which one's going to be the starter on opening day, much less for the Georgia game, but suffice to say that ESPN would not consider either one of them terribly “Now.”

On defense, while Ed Orgeron’s recruiting has been (allegedly) superb, there is a considerable level of un-ripened-ness behind the front four. The entire linebacking corps, man-beast Patrick Willis included, has been replaced by a trio of guys who have seven career tackles between them; the secondary had a grand total of three picks last year and is having to replace its top two tacklers (one of whom, Charles Clark, owns two of those three picks).

Then there’s Orgeron. I know I’m risking life and limb by saying this, but I remain unconvinced that he's got any business coaching in the SEC. There are not enough drugs in the world to whisk me off to the alternate reality in which The Ogre is still employed on December 1, 2008.

What scares me: As bad as the Rebels have been for the past few seasons, they still managed to take Georgia right down to the wire in Oxford last year, and there were two reasons for that: 1) Georgia’s offensive ineptitude at the time, and 2) BenJarvus Green-Ellis, the Rebels’ somewhat excessively named tailback. Knowing that Brent Schaeffer couldn’t complete a pass to Jerry Rice in an airplane lavatory, Georgia’s defense repeatedly stacked the line against Green-Ellis and still yarked up a total of 156 rushing yards; this year Green-Ellis will be running behind an even more experienced offensive line, so rotsa ruck, fellas. And while Ole Miss was one of the few teams in the Western Hemisphere that had as many dropped passes as Georgia did in ’06, their receiving corps brings back nearly everybody, including Mike Wallace and Dexter "DEX-TAH MA-CLUS-TAH!" McCluster, so they could be dangerous in the event that either of the two QBs gets his head screwed on straight.

Player who needs to step up: MLB Brandon Miller. Guy’s got loads of talent and potential, but for whatever reason it just hasn’t all come together yet. Well, it’s time to start producing, because he’s going to be expected to be the anchor for this very green LB squad this year. As yet, neither of the Rebels’ QBs have offered any reason to think Ole Miss won’t be repeating their “ride BenJarvus ‘till the wheels come off” offensive strategy from ’06, so that just makes Miller’s job that much more important.

What I think will happen: The Rebels played Georgia a lot closer than anybody expected last year, but Georgia will be a lot better on offense than they were in ’06, while Ole Miss . . . well, that’s anybody’s guess. For the reasons I’ve already enumerated, trying to predict who’s going to be the Rebels’ starting QB on September 29 is almost as fruitless an enterprise as trying to predict who’s going to win the Iowa Democratic caucus in 2016, but that may ultimately be beside the point, as the defense’s biggest challenge will be to keep Green-Ellis from running all over them again.

Whatever struggles the Rebels experience in the passing game, I’ve still resigned myself to the prospect that BJGE will rack up at least a hundred yards in this one, but Matt Stafford could get three hundred in front of the home crowd, and ultimately that’ll be the difference. Ole Miss just isn’t going to have enough offensive balance to keep up with Georgia on the scoreboard; if the Dawgs can build a big enough lead, Ole Miss will have to start passing instead of just dumping the whole game on BJGE’s back, and that’s going to spell trouble for the Rebs. Georgia should be able to win by at least two touchdowns.

If you’re trash-talking: Well, there’s the 11-23 record over the last three seasons and the above-linked Orgeron-nearly-kicked-the-neighbor-kids’-asses story, for starters. But there’s also this bit of whimsy, filmed a couple years ago when everyone in Oxford no doubt thought The Ogre was the second coming of John Vaught:

Now, I’m not going to try and claim that cringeworthy TV-commercial appearances are endemic to Ole Miss. Terry Bowden had some bad ones while he was at Auburn; Steve Spurrier's "yeah, click-clack" ad for Under Armour was certainly a head-scratcher; Georgia’s own Jim Donnan did a couple YellaWood ads in the late ‘90s in which he might as well have been wearing a T-shirt that said JUST GIVE ME MY FIFTY BUCKS AND GET ME THE FUCK OUT OF HERE. But Orgeron’s Hummer ad is arguably the new Everest for WTF-just-happened endorsements. There’s just something about a gigantic football coach telling me in a Cookie Monster voice "You need a Hummer" that makes me feel, well, icky. I know I need a hummer, Coach O -- God almighty, do I ever need one -- but now I’m not sure I really want one. Am I the only one who had that reaction?

Up next: Time to head to Costco and stock up on Haterade as the Dawgs head up to Knoxvegas to face the Vols. I got your Rocky Top right here, fuckers!
Posted by Astronaut Mike Dexter at 7:55 AM

I went through law school with an Ole Miss Dancing Rebelette as my study partner. It was very very nice. We studied a lot.

I bring this up only to say that I went through law school with an Ole Miss Dancing Rebelette as my study partner.

That's so not fair. I went through law school with a former drill sergeant as my study partner. There were not even any Dancing Rebelettes in my law school. *sigh*

I went through law school with an Ole Miss Dancing Rebelette as my study partner. It was very very nice. We studied a lot. No drill instructors, although I had a class mate first year that was a major in the reserves and had to withdraw when his unit went active.

I bring it up this time not to say that I went through law school with an Ole Miss Dancing Rebelette as my study partner. I was going to save it for next week, but of my other study partners (we had a group of 4) one of the others was a UT cheerleader.

Her hotness was only overcome by the fact that she is insanely smart. Also, last year she ran the Music City Marathon on a whim. She was just going to walk half of it, but got bored a mile or so into it so she just ran the whole thing instead.

BTW, my moot court team had a guy that transfered to UGA to play football from a Jr Coll, but I think he was only on the practice squad owing to some eligibility concerns from the transfer.

Did I mention that I went through law school with an Ole Miss Dancing Rebelette as my study partner?

Hm. I went through law school with a former Miss Columbus / 2nd runner-up Miss Georgia as my study partner. I might also mention that she was a competitive gymnast.

A lot of lawyers on here. Who da thunk it?

I was in court the other day and I think my public defender was a former Ole Miss Dancing Rebelette...or was she the judge?

My ex went to Ole Miss, but she wasn't hot enough and they kicked her out after her freshman year. (She says it was grades, but I believe the former.)

Also, I never noticed how Orge REALLY DOES sound like the cookie monster! Holy hell, that's why I could stop eating Chips Ahoy during last years game...

My ex was/is hot enough to go to Ole Miss, but it turns out they don't have a degree program in Anger with a emphasis in Bitterness.

The biggest upset is that maybe, MAYBE, two of those girls are attractive, and one of the two only in an extremely made-up, is-that-your-real-face way. Although most daddy's girls sorority queens wouldn't be caught dead as a Dancing Rebelette, this still makes me question things I thought I knew about Ole Miss.

True Confessions:
1. I didn't go to law school, but I did have class with Miss Georgia 95 and the 4th runner-up (who is now on MSNBC).
2. There are a lot of lawyers on this site (which is really funny if you read one of EDSBS's most recent posts "by a Georgia atty").
3. I hadn't really heard the Ogre much since they weren't playing a lot of Ole Miss games in Thailand over the past 2 years, but I heard him during the SEC media day & OMG!!!1!! Where did they get that guy? "Hello y'all, welcome to Ole Miss where our coach is the perfect caricature for a moron."

FYI-Sorority girls are beer drinking pot belly... just ugly girls with no rythm- so they could only tryout for the rebelettes...not be one.