A Bulldog Tempts the Wrath of a Vengeful God, Part IX: Troy. 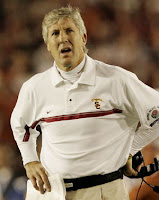 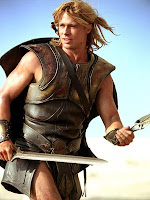 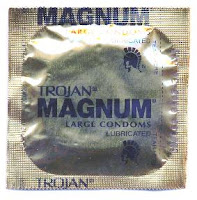 Nope? None of these? Not even close?

Hometown: Troy, Alabama.
Last season: Went 8-5, won the Sun Belt, and annihilated Rice in the New Orleans Bowl. Check that: the R+L Carriers New Orleans Bowl. I'm trying to think of the perfect "Troy, Alabama"/"truckers" joke to make here, but honestly, wouldn't it be superfluous regardless?
Hate index, 1 being my sister Ann, 10 being Ann Coulter: Three. And none of those three points have anything to do with Georgia; they're all from the fact that UAB and Troy have sort of positioned themselves as in-state rivals. (Yeah, I know, go ahead and make your jokes, but Auburn and Alabama were taken.)
Associated hottie: Laura McDonald, a 2007 graduate who won the title of Miss Troy University last year. Her page on the Miss Alabama Web site says her platform is "Reading is Learning"; being illiterate myself, I wouldn't know. 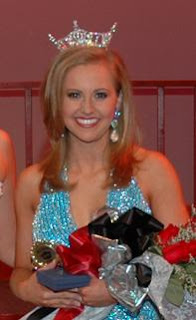 What excites me: Since moving up to Division I-A in 2001, the Troy offense has rarely been what you'd call "electrifying." Last year was the first time in four years that they averaged more than 300 yards per game; their best season in D-IA scoring-wise was 2004 when, aided by a +11 turnover margin, they scored 23.8 points a game and earned a place in history as the last team to ever lose a Silicon Valley Football Classic. The new spread offense installed by coach Larry Blakeney last year appears to be a better fit for QB Omar Haugabrook, but against three BCS-conference opponents last year -- Florida State, Georgia Tech, and Nebraska, none of which exactly qualified as stone-cold killers against the pass -- Haugabrook still only averaged about 182 yards a game. Troy had to travel to Tallahassee, Atlanta, and Lincoln in successive weeks, which goes a long way toward explaining why the performance of Haugabrook and the rest of the team deteriorated so markedly over that stretch, but still, with only one returning starter on the offensive line, this is probably the least dangerous offense we'll face all year with the exception of Western Carolina.

Special teams was another weak spot for Troy last year, with kicker Greg Whibbs only making 6 of 14 field goals over 30 yards and punt returner Leodis McKelvin averaging only 11.2 yards per return. The overall unit should get better this year, but they do have to break in a new punter, which could open up some opportunities for Mikey Henderson.

What worries me: What Troy has lacked in terms of offensive power they've more often than not made up on defense, and this year's unit returns eight starters. But what worries me more than anything related to straight-up talent is simply the timing of the game itself, which is the textbook example of a "sandwich" or "trap" game. Coming right after Florida, we'll either be moping around after our 16th loss to the Gators in 18 tries or primed for a letdown opportunity after knocking off the defending national champions, plus we've got the traditional rivalry match with Auburn right around the corner. This season will mark the first time in 55 years that we've played an out-of-conference game between Florida and Auburn -- from 1953 to 2001, those games were played back-to-back -- so it's anyone's guess as to how we'll perform in this situation. Regardless of what happens against Florida or what kind of opponent Auburn shapes up to be in 2007, Richt and his coaching staff may have a tough job on their hands keeping the team focused on Troy, and after last year I'm hoping nobody's going to use "C'mon, Doug, it's Homecoming" to refute that statement.

Player who needs to step up: WR Sean Bailey. If past Georgia performances in OOC games are any indication, the most pressing concern for this game is that the offense is going to get listless and stagnant and allow Troy to hang around for a lot longer than they should. To counteract that and keep the home crowd's boo-birds at bay, the Dawgs are going to have to put some distance between themselves and the Trojans early, which means some long bombs right out of the gate, and that's going to require some electrifying, momentum-building receptions. Despite having to sit out 2006 with a knee injury, Bailey is the receiver best-equipped to make those kinds of catches, and even when he's not the designated target on a given play, his senior leadership will be needed to prevent the receiving corps as a whole from having the kind of season they had last year.

What I think will happen: As with Western Carolina, the outcome of this game shouldn't be in a whole lot of doubt; the final margin of victory all depends on which Georgia team shows up. But like I told Kyle King earlier in the summer, with Troy being a much more talented team than WCU and the timing of the game being dicier, there's a real danger of this game turning into Colorado '06 redux if the Bulldogs don't keep their minds on the opponent at hand.

Ultimately I don't think this one will be quite that close, but neither do I see it ending up on anyone's list of Top 10 Awesome All-Time Georgia Blowouts. I think Georgia will score on its first or second drive, get a big reaction from the crowd, and as has been the case with many such games in recent years, let off the gas a little too early; I can see them leading by as little as a single score at halftime. If they somehow hold a lead in the double digits, I'll be thrilled.

Fortunately, that three-game stretch of BCS opponents Troy played last year gives us a classic example of what happens when plucky underdog meets big-program depth. In closer-than-expected losses to FSU and Georgia Tech, Troy hung close in the first half, trailing GT by a single touchdown and actually leading the Seminoles 3-0; it was in the second halves of those games that they eventually ran out of gas, got outscored by an aggregate 45-27, and lost. Georgia has enough depth on offense to effect a similar outcome. Damon Evans didn't put this game on the schedule thinking there was a real danger we'd lose, and however uninspiring the situation may look at halftime, I think Georgia's depth (particularly at tailback) will take over in the second half and drive the Dawgs to a solid if unspectacular win.

Be that as it may, however, I'm already willing to predict Georgia won't cover the spread in this one, whatever the spread ends up being. And if I'm hurtin' for cash by the time November 3 rolls around, I may just throw fifty bucks or so on Troy plus the points. My kids gotta eat!

If you're trash-talking: Other than the usual condescension directed toward any team that competes in the Sun Belt Conference, I don't know that there's a lot to be gained by smacking around a team that's only been in Division I-A for going on seven years. If you really want to get involved, though, you could always point out that they play their home games in a venue called Movie Gallery Veterans Stadium, which always sounded funny to me, as if they were recognizing people who fought in a bloody battle between rival video-rental franchises. "I'll never forget that morning when the Blockbuster troops attacked -- they came in over the New Releases shelf and laid waste to the entire Drama section before we could regroup. We eventually held them off by tossing those giant-size Gobstoppers at them, but we lost a lot of good men that day, not to mention all but two copies of 'Stomp the Yard.' War is hell."

And then there's the fact that the stadium's 1998 expansion (which coincided with the sale of naming rights) was primarily bankrolled by one Richard M. Scrushy, the former HealthSouth CEO who would later be convicted of bribery, mail fraud, and obstruction of justice along with former Alabama Gov. Don Siegelman. Needless to say, the first half of "Richard M. Scrushy Field at Movie Gallery Veterans Stadium" doesn't get mentioned a lot these days.

Up next: My personal favorite of the Bulldogs' many heated rivalries, Georgia vs. Auburn.
Posted by Astronaut Mike Dexter at 8:01 AM