The Friday Random Ten+5 falls off the ugly tree and hits every branch on the way down.

(Side note: To try and narrow this down some, I'm only picking from the field of current-model passenger cars presently on sale in the United States. Thus the utterly worthless Suzuki X90, which was discontinued nearly a decade ago, is ineligible, as is the BMW 7-series, which probably would've made the list four or five years ago but has been mercifully redesigned since then.)

Please, no "Hey, asshole, I drive one of those" comments. Your lack of taste is not my problem. 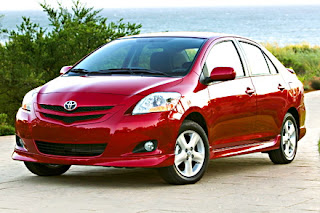 Toyota Yaris sedan
A car for people who just don't care what kind of car they drive, who are too apathetic to even do the currently trendy thing and buy a Scion. You have to work really hard to design a car that makes a Corolla look sexy. 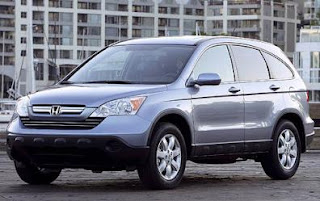 Honda CR-V
Honestly, none of Honda/Acura's SUVs are any prizes in the looks department these days, but the CR-V, which looks like it was born with a bilateral cleft palate, is probably the worst of an uninspired lot. The kindest comment I've heard on its styling came from Katia, the Ukrainian waitress from the restaurant around the block, who said something along the lines of, "I'd like to have a car like that -- it looks so feminine." Which, of course, is precisely the reason people buy SUVs these days. I can't wait for them to bring out the Hello Kitty Designer Edition. 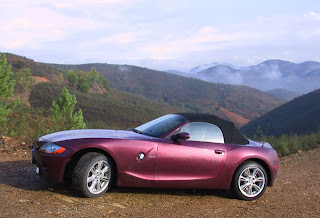 BMW Z4
Honestly, I tried to like this car when it came out, but it was kind of like the "Hamptons" episode of "Seinfeld," where Jerry and Elaine tell their friends to their faces that their new baby is "gorgeous" but then turn around and are like, "Is it me or was that the ugliest baby you have ever seen? A little too much chlorine in that gene pool." On the other hand, the guy who designed it, Chris Bangle, claims to have been influenced by the work of Frank Gehry, so I guess Z4 owners can proudly tell their friends their car looks like the Guggenheim on wheels. 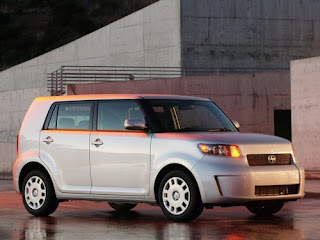 Scion xB
Rarely has my faith in the overall intelligence of generations X and Y been more shaken than it was a few years ago when the Scion xB came out and sold like crack-flavored hot cakes. I just can't imagine why anyone would want to be seen in public driving something like this, though apparently the whole point of the Scion brand is not the cars themselves but the rather extensive catalogue of dealer-installed accessories such as rims, spoilers, interior accoutrements, decals and what have you. I guess I'm just having trouble with the concept of selecting a car based solely on how easily you can tart it up with aftermarket junk. To me that's like saying, "Hey, guys, I want you to meet my fiancée, Jane. She's kind of ugly and not all that bright, but doesn't she dress well?" 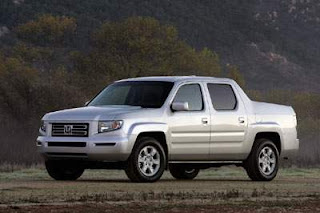 Honda Ridgeline
Ladies and gentlemen, the ugliest new car currently on sale in America. And yet, I think I have a better idea of the answer to the "What were they thinking?" question than with any of the others. See, Honda wanted to enter the pickup-truck market for the first time, but thought they wouldn't be taken seriously by American truck buyers unless they put out something that looked like an urban assault vehicle that Omni Consumer Products would've produced in the first "RoboCop" movie. So they took a Honda Pilot, gave it a faux-semi front end and a weird sloping pickup bed, and voilá. Sadly, it actually has some pretty innovative features, but still, if I'm gonna buy a goofy-ass four-door pickup truck that I don't actually need, I'm gonna save up for an Escalade.

Just missing the cut, the +5 for the +5: the Jeep Compass, the Chevrolet Uplander minivan, the Lexus SC430, the Dodge Caliber, and the Acura RDX.

Your own Ten and/or nominations for the Got Beat With The Ugly Stick awards are invited in the comments.
Posted by Astronaut Mike Dexter at 7:24 AM

Thank you for pointing out the ugliness of the Ridgeline. What a piece of crap truck. It has the lightest bed capacity of any midsized or larger truck on the market, a miniscule towing capacity, and the hottest feature according to Road and Track, Auto weekly etc is that it has a cooler under the bed! WTF? If I am using it as a truck won't there be stuff in the bed that I will have to move to get to the cooler?

"Great, help me move this mulch so we can get into the damn cooler."

"Dang Vern, it's a good thing you bought the Honda, if this were a real truck it would have a lot more mulch in it."

Thing is, Honda builds a car that will last forever, so if you buy this crap wagon you are stuck with it a long, long time.

Oh, did I mention that the 4 wheel drive version of it uses the same front will drive power transfer system as the Pilot? Just what you need when you are hauling a bed full of mulch across a wet lawn!

All of this is couple with the realization that the Ford, Dodge and GM diesels get better mileage.

What a piece of crap.

For reals...how could you leave out the Chevy HHR? Having been dealt one on occasion as part of some cruel joke by Hertz, I can honestly say that is one of the biggest turds on the road today. I used to feel sorry for Detroit until I drove that automotive abortion. It's like the design team went dumpster diving at Chrysler and pulled out an shit canned PT Cruiser rough draft. If your car makes a statement, then the HHR says that you wear jean shorts, think the mullet never went out of style, and believe that wearing a members only jacket actually makes you part of the club. So crank up the Night Ranger and hit the town like a big block of gouda...(cue real men of genius music)..."Mr. cheesy HHR dri-i-ver"

I can only assume that you weren't in the mood to give out collective awards, because the hard part with domestic manufacturers is finding a car that isn't either atrocious or boring.

I don't own any of the ones that you listed, for what that's worth.

I agree with DCT- it would be much more challenging to come up with 5 American cars that do not suck.

Anyhow, my nomination is the Honda Element with it's horrid looking some panels are modular plastic and some panels are paint finish- fucking horrid. Looks like some shit a 3rd grader made with an erector set or legos in 1984.

And let's not forget how horribly ugly Hummer's are, especially the yellow ones. If you are going to make a car purchase to compensate for your insecurity and small penis, at least make it a slick looking sportscar, not a giant square ugly machine with the aerodynamics of a brick. Come to think of it, the all right angles Mercedez Benz SUV is terrible as well.

3. "Electric" by Tristan Prettyman, from 'Twentythree'

7. "The Last Time" by Gnarls Barkley, from 'St. Elsewhere'

8. "Greatest Hits" by Sublime, from 'Stand By Your Van'

9. "El Farol" by Santana, from 'Supernatural'

How could you possibly exclude the Honda Element (I'm assuming because the piling on would've been excessive) and most importantly- the Pontiac Aztek???

I think the Pontiac Aztek was discontinued a couple of years ago, but it was certainly setting the pace right up until GM pulled the plug.

However, any discussion of world's ugliest car has to include a nod to South Korea's ringer, the SsangYong Rodius. The "r" is to conceal the actual nature of the vehicle. It's truly amazing.

The yellow Aztek is the most hideous thing I have ever seen on the road. Still being sold or not, they are new enough that you still see them on the road.

Well played RC. Kikcing myself that my vile hatred of the Element momentarily blocked out my memory of the Aztek.

There's nothing uglier than a Hummer regardless of whether you get the Papa Bear, the Mama Bear or the Baby Bear (which I think Hummer hopes is "just right"). And that is even more true since they promote themselves with a commercial that says "buy a Hummer and you cheat in a car race and win." That's values for you.

hey, anonymous. Did you see how they changed that commercial early on in its running? They added a bit at the very beginning where the little boy is reading the rules. The first one to the bottom of the hill wins. This was apparently an attempt to counter the obvious interpretation that Hummers are for cheaters.

I'm with RC. The Element is tragic.

I think you really should do research before using names. Frank Gehry had no input into the Guggenheim. It was designed by Frank Lloyd Wright.

I'm glad that I don't have your taste. The only thing worse would be having no taste at all.

I think the clear point is that Honda blows at making SUVs and trucks, so if you're gonna buy a Honda, stick to what they do well. The Civic Hybrid I drive is great.

Speaking of fact-checking, Gehry did, in fact, design the Guggenheim -- the one in Bilbao, Spain, that is. Tsk, tsk.

And the sad thing is, had anonymous only clicked on the "Guggenheim" hyperlink, he/she would've known I was talking about the one in Spain.

Congrats, anon@11:44. When I get around to doing the Five Dumbest Commenters list, I'll be sure to remember you.

Dang, I bet I make that list too. Didn't know we were keeping score...

I hope to be included on said "dumbest commenters" list. But seriously, the Z4? I mean, I think ALL cars look pretty ugly but at least the Z4 looks like you could drive it on an inverted roller coaster track...

The Aztek was the worst.
I have come to accept the Element as what it is- a pre-hybrid SUV for tree-huggers with an emotional side that overcompensates for their lack of taste.
I saw a yellow H3 today and thought to myself that the owner was probably thinking, "just in case you didn't see my big @$$ vehicle, I got a bright yellow one so you would."
I liked the old CR-Vs, but this new model is horrible. Honda has definitely whiffed on trucks/SUVs

I agree!!! All of the pictured vehicles are UGLY! I'd like to add a vehicle ever so deserving of condemning comments: the 2009 Ford Flex. That leather lined bread box on wheels is just about the most pathetic creation to emerge from Ford in years. And let's not forget ANY Hummer product. They're all sinfully ugly creations. Chrysler's 2008 Sebring and Avenger plus the Caliber are definitely deserving of criticism for being such eyesores. Ok, I know this may ruffle some feathers, but I find the 2009 Dodge Challenger to be a rather unpleasant looking beast. It's chunky, bulbous and linear architecture yield to a shitty knockoff of a 40 year old design concept. Any wonder why Chrysler is on it's deathbed???