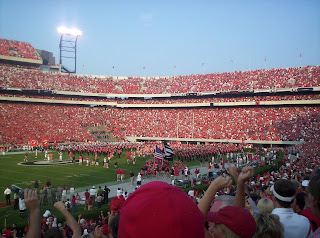 The '07 Bulldogs charge the field for the first time.

Not trying to get blatantly self-promotional here, but in my preview of the Oklahoma State game written a few weeks ago, I said the following:

I know that all of Bulldog Nation wants to believe this game is setting up like Boise State '05, in which an up-and-coming team with a potent offense came into Sanford with Shocking Upset on their mental to-do list but instead got pwn3d harder than Dan Quayle in a spelling bee, but that Boise State team was used to playing in the WAC, where the competition mostly sucks and the average stadium is one-third the size of Georgia's. Intimidation isn't likely to be an issue for the Cowboys, who travel to places like Austin, Norman, and College Station on a regular basis; granted, they haven't been winning those games, but simply playing in front of a 90,000-strong audience isn't going to be enough to goad Bobby Reid into handing out gift-wrapped INTs the way Jared Zabransky did.

To some extent, I think I turned out to be right. This game wasn't a Nagasaki-sized beatdown from the get-go like Boise State was, despite the blown-up punt on Oklahoma State's first drive that allowed Georgia to score a TD on the very first offensive snap of its 2007 season. OSU bounced back from that gaffe in short order, got onto the scoreboard not too much later, frustrated our offense on the next couple drives and ended up trailing by only a touchdown at the half. Unlike Boise State, this was a game that was not decided by the time the Redcoat Marching Band took the field. 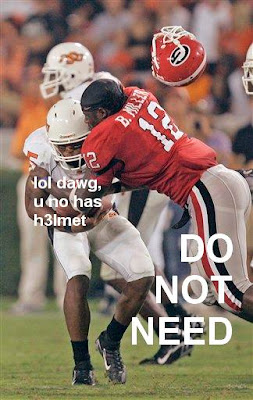 Yet it is for precisely all those reasons that I think this win was in many ways more impressive than the one over Boise State two years ago. In that game, we got into the head of their team leader on the very first play and ensured that, from then on, the Broncos would be nothing like the team we'd thought we would face. In this one, we got Oklahoma State's best shot. They did pretty much everything they'd normally do in a big game; we just didn't let them do it very well. Unlike last season, in which no halftime lead was safe, we made adjustments and clamped down even harder on the Cowboys in the second half and, sure enough, they scored exactly 0 points after intermission, something that hadn't happened since Texas's come-from-behind win over the Cowboys in 2005 (and I'm sure you all recall what Texas went on to do that year). OSU, one of only two teams in the country last year to average more than 200 yards per game both running and passing, didn't accomplish either against the Dawgs.

It was a fantastic job of preparation by our coaches, who'd had the team entirely focused on this game ever since spring practice began, and a fantastic job of execution by the players, particularly the defense. I'd figured all along that our offense should've been able to drop 30-something points on OSU's defense, but I never would've dreamed that our D would clamp down on OSU to the tune of only 14 points. I was really worried about how the unit as a whole would perform this season, particularly in a conference as defensively brilliant as the SEC, but I'm a lot less worried after last night. 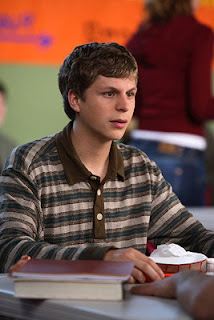 More than being just talented or fast or whatever, though, I was impressed by how everyone played so smart Saturday night. Stafford continues to demonstrate rapid progress at the QB spot; he didn't throw a single INT against the Cowboys, and I don't remember us giving up the ball once. The running game took a little while to get going, but once it did, it got into a nice rhythm, and Knowshon Moreno, in particular, showed some mind-blowing moves that stopped just short of showing off. The defense, as young as they were, didn't get fooled by any of the fancy-pants plays Oklahoma State tried to pull, they just stayed home, didn't overpursue, and followed through with their tackles instead of thinking a flag-football arm grab would be enough to take someone down. I don't know that I've seen tackling that thorough since the beatdown of LSU in the '05 SEC title game, and it was particularly gratifying given the fact that if we'd spent much more time in their backfield, we would've had to start paying property taxes.

Braves and Birds blogger Michael Elkon has cooked up a little something called the Charles Rogers Theorem designed to warn against certain teams being overrated headed into the season, and one of the criteria is that a potentially overrated team is likely to have finished the preceding season on a hot streak -- the thinking being that people's memories are short and they are thus prone to arbitrarily placing more importance in a team's last few games than the many that came before them. That was one of the main reasons he put Georgia on red alert in terms of potential overratedness for 2007, and it was one of the main reasons Georgia had to win this game and win it convincingly, to show that their inspired three-game win streak to end last season wasn't a fluke.

At least so far, they've done that. Stafford is continuing to mature both as a passer and a leader; Bobo's fairly vanilla game plan didn't ask him for a lot of heroics, but he managed the game efficiently and eliminated the nervous mistakes that marred his freshman year. The offensive line, despite their relative inexperience, similarly avoided blatant gaffes. The defensive front seven played with an aggressiveness I couldn't have expected from a group with such little starting experience; the secondary locked down and didn't let up. The special teams, outside of allowing one or two big punt returns in the early going, helped the rest of the team out as much as they could have. It was a complete effort from a team that stands to only get better as the season progresses. 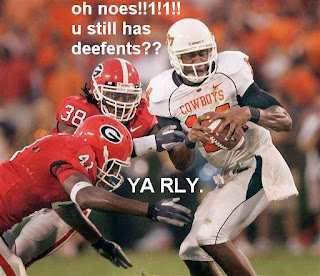 And I would leave it at that, but I can't, because I did make a vow both in one of the comments threads on Every Day Should Be Saturday and to a couple of folks at my office. Some of you may recall that last year, in preparation for the South Carolina game, I promised that if Georgia somehow managed to shut out Spurrier and the Gamecocks, I'd run up and down the street in front of my apartment wearing nothing but a Bulldogs flag. Well, Georgia fulfilled their end of the bargain, and later on that night, so did I. You'd think that that little escapade would've taught me a lesson about making such declarations, but evidently not, for I told both EDSBS and my co-workers that I would once again do the running-around-wearing-nothing-but-a-Georgia-flag shenanigans if Georgia managed to beat OSU by more than a touchdown (i.e. 8 points).

Five days and a 21-point beating later, I'm once again sizing up the old Georgia flag to see how effectively I can hope to hide my thunder. If you're gonna be walking along the 2000 block of Highland Avenue in Birmingham sometime Thursday evening, I'll probably be doing it then as a part of the Thirsty Thursday festivities my neighbors and I hold each week.

Both sides of the story: 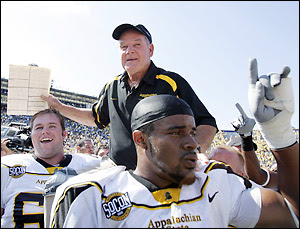 Not actually a D-IA football team, but they did stay at a Holiday Inn last night.

· I don't know how much the words "Chaminade-Virginia 1982" mean to any of you, but if they mean something, then they were probably on your mind Saturday afternoon when Appalachian State upset fifth-ranked Michigan in Ann Arbor. Biggest shocker in college-football history? Maybe to you, but not to those of us in the Southeast; we've been saying all along that the Big Ten just can't hang with the speed of the Southern Conference.

· No offense to App State here, and yeah, it was stunning to be able to watch that upset unfold in real time, but why couldn't it have been Michigan State suffering the humiliating home upset while Michigan blew out their non-conference opponent? Or, in the wake of Georgia's big win, would that have simply been greedy on my part?

· Georgia Tech went up to South Bend on Saturday, and for once, Tech's wasn't the most brutal offense on the field. That's not to say I'm anointing Tech a juggernaut already -- Taylor Bennett looked so-so at best against an Irish secondary that wasn't keeping anyone up nights in the preseason -- but man, that's one rickety team that supposed genius Charlie Weis is fielding up there. I don't think we have to worry about ND taking up too much space in the Top 25, much less the BCS bowl lineup, this season; the only real question is which excuses Notre Dame fans are going to use to blame this all on Tyrone Willingham. 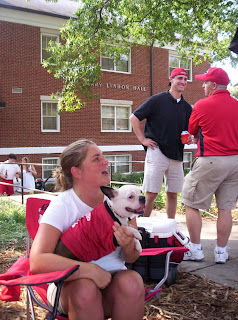 · And finally, Uga VI was the only dog in the state of Georgia yesterday more popular than Jenna the Wonder Terrier, whose new Georgia jersey made its 2007 tailgating debut for UGA-OSU. I don't know whether this holds true for girls on other college campuses necessarily, but Georgia girls love a little dog in a football jersey. Love them. All you picklewipes who told me "dressing up a dog is teh ghey" or similar such nonsense, let's see how smug you are when I meet my future wife in Athens at Georgia-Ole Miss in a few weeks.
Posted by Astronaut Mike Dexter at 12:43 PM

In reverse order, let me say that as one of the "picklewipes" (I love how you make up terms that somehow make sense) my point was that girls love it. Either use it for picking them up or admit that it is gay. I am glad it's working out for you.

Just my opinion, but Meatchicken is just waiting to be the next Notre Dame as far as football is concerned. I think that sums it up.

Just want to thank the fine folks at Appalachian State for giving me something to hold over my brother (U of M class of '02) for, like, the rest of all time.
Oh, and, JENNA!!
Sweater vest = possibly teh gey
Jersey = butch as hell

College football is operating on a different paradigm now and it is about time Fan Nation woke up and realized that the 85 scholarship rule has changed the game faster than our mindset of upholding the traditional powers (status quo) is willing to move. This will become the norm in increasing fashion now that Utah and Boise State have broken the BCS barrier!

what do you do with your dog during the actual game?

Thanks for the kind words re: wishing it was State.

Not even my UGA-alum roommate was quite as sympathetic.