The Friday Random Ten+5 blames it on the rain.

Not all that many people around here in Alabama are picking the Bulldogs to beat the Crimson Tide this weekend, which shouldn't come as much surprise to anyone. Hey, that's fine; I have a long and rich history of liking things nobody else does. We've explored that topic many times before on this blog and will no doubt explore it many more in the future, but for right now I'm applying it to music and making this week's +5 the Five Albums Nobody Liked But Me. 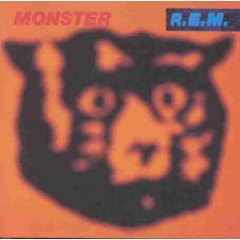 R.E.M., Monster
I still can't quite figure out why so many people, even some diehard R.E.M. fans, hated this CD. Was it because R.E.M. appeared to be following the grunge trend by going with a rougher, harder-edged sound? I got news for you -- after frigging "Shiny Happy People," they probably needed to do something a little edgier. But anyway, I liked this album, and the closing date on the accompanying tour (at the Omni in Atlanta in 1995) is still one of the best concerts I've ever been to.
Best track: "Strange Currencies" 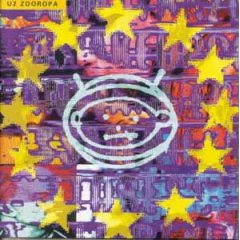 U2, Zooropa
At a point in their career when they could've either a) released something that sounded exactly like the groundbreaking Achtung Baby or b) released something that sounded like grunge (like R.E.M. eventually did), U2 instead chose c) releasing something that sounded like absolutely nothing else anywhere. Plenty of people turned up their noses at it because they didn't want U2 to go techno, which I guess is understandable in a way, but this album still sounded really, really cool -- and honestly I still have more fun listening to it than more earnest efforts like All That You Can't Leave Behind or How to Dismantle an Atomic Bomb, which have been much better received.
Best track: "Daddy's Gonna Pay for Your Crashed Car" 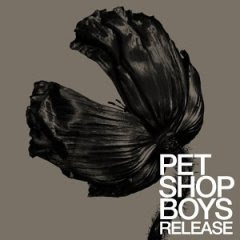 Pet Shop Boys, Release
Honestly, I wasn't crazy about this album myself when it first came out; maybe it was because it departed so markedly from the Pet Shop Boys' technopop roots, but somehow it seemed to me like a collection of B-sides that had been separated from more mainstream, more substantial singles somewhere along the line. But then I thought, you know what? Even the Pet Shop Boys' B-sides are a lot better than what most of the rest of the world puts out as A-sides, and I stopped worrying about it. Release still isn't my favorite PSB album, but if you can get over the guitars and give it a chance, there's a lot to like here.
Best track: "I Get Along" 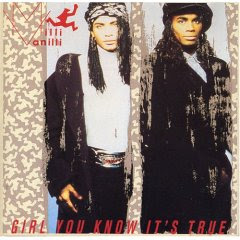 Milli Vanilli, Girl You Know It's True
Go ahead, make your jokes, but deep down you know this album sounded great back when you were in junior high. And if Arista had just marketed it straight instead of arbitrarily fronting it with two random male models they plucked off a runway somewhere in Europe, they might've had one of the best pop albums of the pre-grunge era; it'd still hold up pretty well today (as well as any '80s pop album could, at least) if it hadn't been completely sunk by that silly, embarrassing lip-sync controversy. (Unfortunately, the real singer, Charles Shaw, doesn't appear to exactly be an angel himself, but at least he can sing.)
Best track: "Baby Don't Forget My Number" 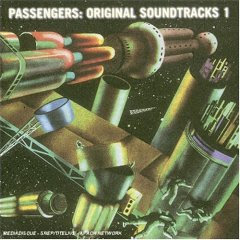 Passengers, Original Soundtracks Vol. 1
Yeah, a second U2 album -- because that's really what this was, with the boys collaborating with Brian Eno on an album full of ambient-sounding pieces, instrumentals, and just plain weird tracks they knew would completely ruin them if they released it under the U2 name. So they came up with the name "Passengers," conjured up 100-percent-contrived backstories for the indie films whose soundtracks each of these songs was supposedly taken from, and released it as a side project. Not everything on here works by a long shot, but it's interesting if you don't go into it expecting to hear "Where the Streets Have No Name" or even "Zooropa," so what can I say? I guess U2 is one of those bands I'm willing to give considerable benefit of the doubt.
Best track: "Miss Sarajevo"

Now the Ten, which also might be liked by nobody but me:

Your favorite unloved albums, as well as your Random Tens, are welcome in the comments -- particularly if they somehow manage to be embarrassing as mine.
Posted by Astronaut Mike Dexter at 8:14 AM

Email ThisBlogThis!Share to TwitterShare to FacebookShare to Pinterest
Labels: Friday Random Ten, the staggering genius that is the Pet Shop Boys

Agree with you on Monster; probably my 3rd favorite R.E.M. album or so. Let's see what the iPod has in store:

How the hell do you have Zeppelin and The Who together with Right Said Fred. Just wrong. For so many reasons. I mean, I'm really at a loss for words. I'm not even going to talk about Starship.

I'm absolutely with you on Monster. But then, I've been a huge REM fan since high school (yes, I'm that old) and saw them on Letterman.

I'm almost embarrassed to bring it up, but I really dig Madonna's Erotica. She's never been a critics' darling, and this outing was especially panned. But come on, there are some juicy grooves there. Her best album, imo, was Bedtime Stories. I've already devoted too much text to Madonna. But she qualifies for the category for a guy whose sojourn in Athens saw the transition from frat parties featuring bands covering Morris Day and the Time and the Monkees (or DJs, for crying out loud) to slippery basement jam-fests featuring Widespread Panic. Bedtime Stories? Abbey Road it ain't, but it's still a turn-off-the-lights-and-put-on-the-headphones-and-smoke-'em-if-you-got-em album from beginning to end.

Ok. There. So now you know.

I'm going to say that I, too, am a fan of Monster. Being the first CD I ever bought (and still have), I've got a soft spot for it. Now, it's not my favorite R.E.M. album, but it certainly isn't as bad as some of their more recent stuff.

And I'll throw my hat in there with the ten:

Monster and Automatic are the only REM albums I've ever bought (I'll footnote this by saying the only songs I really really really like by them are "Fire (the one I love)" and "It's the end of the world as we know it (and I feel fine)". I've seen more local shows in Athens than anyone I can think of that was at UGA while I was there, but oddly don't really like any of the big 3 acts out of athens that are huge (REM, B-52s, Widespread).

And I didn't know anyone had anything outside of "We built this city" by starship...

Monster was a pretty good album and I also liked Zooropa, but neither is my favorite by REM or U2. My favorite heavily panned album is Under Wraps by Jethro Tull.

Here's what itunes has to say:

I have/had 3 of the albums you listed, but I am not confessing to which 3 they are.

Will, weren't both of those songs on Document & Eponymous? Neither were on the 2 REM albums you have.

5. "Scandalous Hoes" by Mike Jones, from 'Who Is Mike Jones?'

8. "Nobody Knows" by Slightly Stoopid, from 'Chronchitis'

9. "Part Of The Process" by Morcheeba, from 'Big Calm'

DAve and I attended the "Monster" CD release party at the Georgia Theater (the second time I had ever been there). As dorky freshmen, we held out hope that the curtains would drop and the band would come out and perform. We hoped, hoped, and hoped - but all that played was the "What's the Frequency, Kenneth" video on a screen in front. Over and over and over and over and over. And over some more.

And I also still like Sammy Hagar's Van Halen albums more than the David Lee Roth ones. How's THAT for going against the grain?

I'd say the White Album by the Beatles. Nobody really gives it the credit it deserves. I still think it's the Beatles masterpiece, far better than Abbey fuckin' Road.

Also, the Smashing Pumpkins had a gem in Melancholy and the Infinite Sadness, but while it was cool when it came out people still seem to give more attention to Siamese Dream. Bad idea......

I do love the White Album; really, it was just a semi-random collection of little studio experiments that they decided to throw into a single collection. But I'll grant you that they are amazing experiments, and it was the fifth Beatles CD I bought (order of purchase was carefully planned: Abbey Road, Revolver, Sgt. Pepper, Rubber Soul, White Album, Magical Mystery Tour, Let it Be).