Georgia-Alabama roundtable: Inside the minds of the Sabanists.

When Mark Richt closed the Bulldogs' practices to the media for the entire week leading up to the Alabama game this Saturday, information about the team was reduced to a trickle -- to the point where the Crimson Tide diehards at Roll Bama Roll actually had to come crawling to a dumbass like myself for analysis of the Dawgs. (Well, they also got some legitimately useful insight from Georgia Sports Blog's Paul Westerdawg, but still.) In return, Todd and OTS from Roll Bama Roll were kind enough to spill their guts to Paul and me about the current state of the Tide. Paul's questions are answered here, and their answers to my questions are as follows:

1. What was going through your mind when Arkansas pulled ahead 38-31 in the fourth quarter of Saturday's game? Did you honestly think Alabama had a chance to make a comeback, or were you thinking, "Oh, well, we'll get 'em next season"? 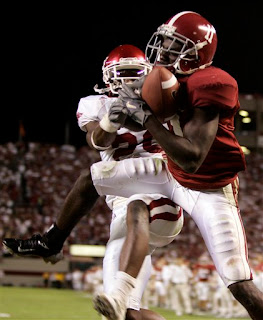 Matt Cadell whups the "sooey" out of the Hogs with his game-winning TD catch.

Todd: My first real thought was, "Okay, this is still winnable." Ever since the blocked FG against Penn State I've had an unfailing belief that the Tide would somehow miraculously pull out a win no matter how grim it looked, and have somehow managed to hold onto that belief through the DuBose/Fran/Shula years. I did, of course, immediately start to panic, thinking that even if we did get a TD to tie it up (or at least a FG to put us within a TD of winning) we wouldn't be able to get a stop in time to get the ball back or, worse, would let them score again. When we did get the stop, though, I knew we were going to win.

OTS: I'll be honest, I thought we were beat. Don't get me wrong, a comeback is always possible, but teams that choke twenty-one-point leads by giving up four touchdowns in just around eight minutes usually don't come back to win. I thought we were dead to rights.

2. John Parker Wilson had a great game (obviously) against WCU, really struggled against Vanderbilt, and then had another very productive outing against an Arkansas defense that obviously still needs some work. What's your assessment of JPW so far? Has he performed up to your expectations?

Todd: Not yet, but I've really been cutting the kid some slack since this is a new offense and I'm sure he's still a little gun shy after last year. He's still quick to throw without setting his feet, and I imagine that's a product of his having to either release the ball as soon as it was in his hands or scramble for his very life last season. He obviously still has some improving to do, but it looks like he's getting better each week and feeling more comfortable in this offense and trusting in the guys around him, and I'd be very surprised if, by the end of the season, he isn't hitting his stride and living up to all the potential we think he has. 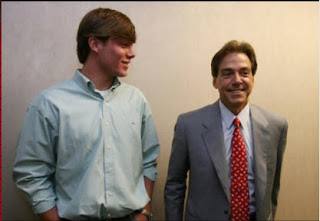 OTS: Well, he looked decent against WCU, terrible against Vanderbilt, and hit or miss against Arkansas. He played a big role in getting us the lead and in the comeback, but his turnovers and inconsistent play were a huge factor in the meltdown. He looks okay, but is still making some very poor, ill-advised throws. He looks pretty good, but improvement is definitely still needed.

3. What about the defensive front seven, which was generally considered to be the team's major weakness coming into this season?

Todd: I think they've really done a great job so far, and guys like Rolando McClain and Darren Mustin have really stepped in and played like they've been in this system for years. They have, however, overachieved so far, and the lack of depth was very evident in the second half against Arkansas, so it's still a weakness for us if the offense struggles and can't give the defense a breather here and there.

OTS: The defensive front seven has been a nice surprise. The defensive ends have played well, and the linebacker corps has played really well, all things considered. Rolando McClain is as good as advertised, and Mustin is playing very good football. Washington was the main concern at nose guard, and while he's likely the weakest link, he's played relatively well. So they've looked pretty good, but it will be interesting to see how well they do against an offense as balanced as what Georgia brings.

4. Before the season began, the general consensus seemed to be that Bama would be good in Saban's first season but probably still a year or two away from really contending in the SEC. After the Arkansas win, though, a lot of those same people now seem to be saying that the reconstruction project is a year ahead of schedule and the Tide might be in a position to contend already. Are you buying into this enthusiasm yet, or hedging your bets until Bama really gets into the meat of its conference schedule?

Todd: I've said all along that a ten-win season is entirely possible. Last year's team was a ten-win wolf in six-win sheep's clothing, and poor decision-making on the sidelines was the only thing that kept the Tide from having a great year, so it's not that big of a stretch to think that Alabama isn't so much a rebuilding project as a quaint fixer-upper. So yeah, I'm buying into the the enthusiasm since I've been enthusiastic since the day Saban touched down in Tuscaloosa. I think it also helps us, though, that the rest of the SEC is looking down, especially in the West. LSU is the clear-cut frontrunner, but Auburn is sitting at 1-2 and looking like they forgot to have fall camp, Arkansas is behind us, and the Mississippi schools are, well, the Mississippi schools. As for our Eastern slate, Vandy is behind us, and the Vols look like they've surrendered and are simply trying to ride out the storm. Your Dawgs are the second biggest concern on the schedule (LSU being the first), and if we can pull off a win on Saturday then contending for the SEC isn't just a pipe dream anymore.

OTS: The enthusiasm comes from two things: a big win over Arkansas and FSU, Tennessee, and Auburn looking terrible. Most expected the Arkansas game to be very tough and the FSU, Tennessee, and Auburn games to be likely losses. But considering how bad they are playing, we are likely the favorite to win all three, and that's really what is moving the projection up. I don't think we're ready to contend for the SEC yet (the West is all LSU's at this point), but nevertheless there does seem to be very legitimate potential to surpass first-year expectations.

5. Here's something on the minds of many Georgia fans at the moment: Was the emotional victory over Arkansas the kind that's really going to build momentum for the Tide and start them off on a tear through the league, or are you worried that the team is emotionally spent -- as Tony Barnhart seemed to indicate in an AJC.com blog post Thursday morning -- and may not have enough left in the tank for the Bulldogs? 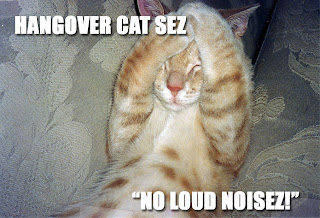 Todd: The attitude of this team has completely changed since Coach Saban has arrived, and letting an emotional victory (or loss) one week spill over and affect the way we play in the next is not something that is going to happen to this team anymore. We collapsed after several of the losses in the past few seasons, and that's something the whole 24-hour rule is supposed to change. We might have a big win, or it might be a crushing loss, but come Monday it's the past and we don't care about the past. All we care about is the game ahead of us. That being said, though, the physical toll of that game might be a little much for an already thin defense, and that's the kind of thing that worries me. They were bullied the whole game by the Arkansas O-line, and it's a real testament to the strength and conditioning program that they were able to get back out there and get that last stop.

6. And finally, this one's off-topic, but I have to sate my morbid curiosity: Were you watching the Auburn-Mississippi State game last weekend, and what was your reaction?

Because what would college football be without a Nelson Muntz moment or two, after all?

Todd: I was, actually, and, you know, ha ha, you suck. But at the same time, I was just bewildered at how quickly Auburn has fallen off. Where are all their highly touted recruits? Is this the same OC that engineered a perfect season and turned Jason Fucking Campbell into a first-round draft pick? [That's Jason Motherfucking Campbell, sirs, and he is an all-world kicker of ass -- Ed.] What is going on with Brandon Cox? I mean, this is a team that gave the eventual [2006] national champions their sole loss on the season, and also bested an LSU team that would go on to win the Sugar Bowl in spectacular fashion last season, and now they should be worrying about Hal Mumme's New Mexico State? Things are just strange right now. It's amusing, of course, highly so, yet still very, very confusing.

OTS: Not watching, but listening to the MSU announcers on the way to T-town. It was great, to say the least. My reaction was a mix of "Oh my God they are really that terrible" and "Whooooooo-hoooooooo!"

Much obliged, gentlemen. For your kindness, Hey Jenny Slater salutes you with a shout-out to Roll Bama Roll Official Hottie Katharine McPhee. Good luck to you guys, and if I'm still upright, I'll see you at some point Saturday. 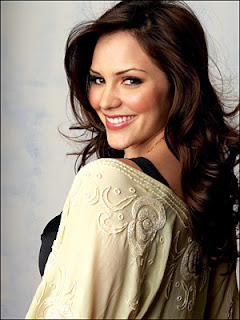 Bama fans: A little nuts, perhaps, but you've got to respect their taste when it comes to some things.
Posted by Astronaut Mike Dexter at 8:50 AM

Not necessarily responsive to the post except that it has to do with Alabama. Jeff Schultz had a great line in his forecasting column today.

"Alabama is 3-0 under Nick Saban, who I’m fairly certain is the tragic result of crossing Pinocchio with snake sperm."

And he picked UGA in an upset.