Gee, thanks. It's been minutes since the last time you reminded us about that. 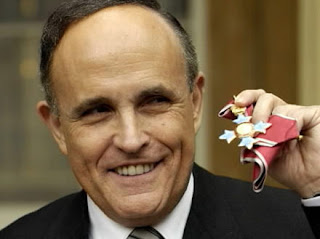 Why, yes, I am a hero, thank you for noticing.

WASHINGTON — A supporter of Rudy Giuliani’s is throwing a party that aims to raise $9.11 per person for the Republican’s presidential campaign.

Abraham Sofaer is having a fundraiser at his Palo Alto, Calif., home on Wednesday, when Giuliani backers across the country are participating in the campaign’s national house party night.

“There are some young people who came up with it,” Sofaer said when reached by telephone Monday evening. He referred other questions to Giuliani’s campaign.

Interesting how everyone involved is backing away from taking the credit for this -- the Giuliani campaign has "no comment," Sofaer says somebody else came up with the idea -- yet apparently nobody's embarrassed enough by the plan to give it the 86ing such a crassly exploitative effort deserves.

I know I've asked this before, but can anyone give me one single reason why Rudy Giuliani should be elected president? Does he have any planks in his campaign platform other than "I was president when 9/11 happened"? I can remember back in 1992, when Bill Clinton was running, how people slagged off his candidacy because Clinton was only the governor of Arkansas and there was no way the governor of a dumb-hick state like that should be elected to the most powerful office in the world. Well, Giuliani was only a mayor, so why the hell does anyone thinh he's qualified? Yeah, I know, biggest city in America, blah blah blah, but seriously, what kind of foreign-policy experience could he have possibly gained from that?

Not frickin' much, if one is to infer anything from this opinion piece in Foreign Affairs, which doesn't even wait 10 words before invoking 9/11 (again). Say what you will about Barack Obama's lack of experience at this, that, or the other, but at least he's on the Senate Foreign Relations Committee, and appears to have formulated opinions based on a modicum of deep thought rather than just regurgitated Bush talking points. Giuliani, on the other hand, fritters away nearly 6,000 words without coming up with anything more substantial or well-thought-out than a term paper you might get from a high-school freshman halfway through his first world politics class.

Seriously, aside from managing not to shit his pants on 9/11 and not hating Teh Gheys, what's Giuliani's selling point? Can people really not see this particular emperor's dick swinging in the wind?
Posted by Astronaut Mike Dexter at 1:40 PM

Email ThisBlogThis!Share to TwitterShare to FacebookShare to Pinterest
Labels: politics, stupidity, the 2008 election

I was sorta with you until you pulled out the tres tired phrase "talking points." I am so sick of that term. Just because somebody agrees with prevailing conservative thought, they were obviously spoonfed their opinions?

And why are conservatives only guilty of this, by the way? I think liberals are even more guilty of regurgitating prevailing thought. Or did everybody really become a global temperature expert in the past five years?

From here on out, use of the phrase "talking points" is, itself, a talking point. Dammit.

"Does he have any planks in his campaign platform other than "I was president when 9/11 happened"?"

He was president? Wow.... I know I was drunk and in college, but I don't really remember it going down that way.....

The fact that his son supposedly hates him and his daughter is supporting Obama kinda makes you wonder if the people who know him best aren't in his corner, why the f*ck would I want to hand him the reins?