Roundtable-hosting duties this week are handed to HornsFan of the blog Burnt Orange Nation who, after closer-than-expected victories over Arkansas State and Central Florida, now has a deeper knowledge of Texas's onside-kick-coverage team than he ever hoped to have. It's all about the knowledge, buddy. Onward:

1. Handicap your team's chances to win your conference championship. If your team is not the favorite, who is?

At best, it's a 119:1 shot. Like HornsFan, I have used a very precise mathematical formula to calculate this. 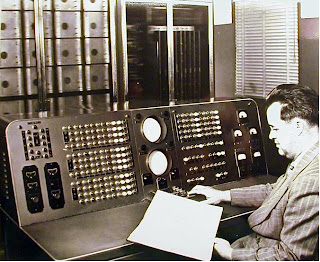 "Weird. I've entered every possible iteration of data, yet each time the computer just says 'You're fucked.' "

The first thing we'd have to do is win the rest of our conference games -- all of 'em. Even if Florida blows it against LSU and South Carolina — I'm making the not-exactly-earth-shattering assumption that Florida will not manage to lose to Ole Miss, Auburn, Kentucky, or Vandy -- we couldn't afford to lose to them because then we'd both be at 6-2 and Florida would of course win the tiebreaker.

As you're all well aware of by now, Georgia is a miserable 2-of-17 against Florida since 1990, which equates to a mere 1 in 8.5 chance we'll beat them. And that's even before we start talking about any of the others left on our conference slate. I've guesstimated that there's a 1 in 7 chance we'll run the table of our non-Florida SEC opponents, so that works out to a 1 in 59.5 chance that we'll win the Eastern Division.

Then, of course, we'd have to play somebody, probably LSU, in the conference title game. We're 1-1 in SEC championships against the Tigers, so cut the odds in half: a 1 in 119 chance that we'll win the SEC. I managed to snow my superiors into giving me a not-insubstantial raise earlier this week, but even with the extra scratch coming in every month, I do not think I will be betting any money on odds like those.

As much as Florida wowed people by annihilating Tennessee last week, I still think LSU is the favorite in the conference; the very young Gator defense has performed a lot better than most people probably thought so far, but if you're talking defenses, LSU's astonishing stable of name-brand talent is still the one that inspires the most confidence. On the other hand, I think a potential LSU-Florida title match would be a lot closer now than I thought it would be a few weeks ago. 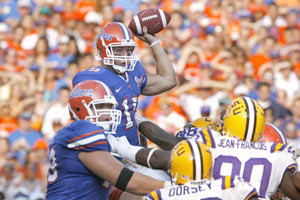 2. Outline the (realistic) best-case and worst-case scenarios for your team.

As bad as we looked against South Carolina, the rest of the SEC schedule is not actually that daunting if we get our heads screwed on straight on offense. Even Florida is not an automatic L -- hell, we were 20-point 'dogs to the Gators when they were defending national champions in 1997 and beat the hell out of 'em! Hooray beer, and hooray joyous self-delusion! 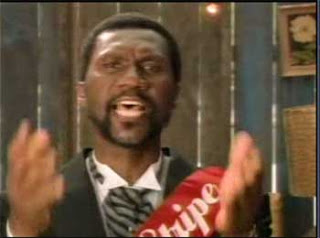 Yes! You are a very beautiful team!

That said, even if we shock the Gators, I don't think we're quite capable of winning all seven of our remaining SEC games, nor do I think we'd beat LSU in the SEC championship game. But the best-case scenario would still be a 10-3 record and probably a trip to the Capital One Bowl, which I'd be quite happy with.

Worst-case scenario: We get whacked by Alabama this weekend, lose a shootout to Tennessee in Knoxville, get creamed by Florida in the Cocktail Party, the home-field curse dooms us against Auburn, we lose to Kentucky for a second straight year, and -- vomit -- Chan Gailey finally gets a win over us on the Saturday after Thanksgiving. That's a 5-7 meltdown right there, and honestly, even Vanderbilt and Troy are not at all the layups they once were.

But I don't even want to think about that, because 5-7 would be enough to make me start looking for one of these, or, in the event of an unsuccessful search, invent one myself. 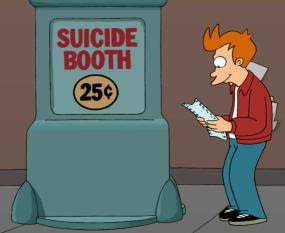 Now, do I want Standard Bludgeoning, or pay an extra quarter for Quick 'n' Stabby?

3. We're only three games in to the season, but teams and storylines are starting to take shape. Compare your team to a character or theme from a fable or children's tale.

Well, now that Georgia has, as Steve F'in Spurrier so helpfully reminded us, dropped five straight games to SEC East teams -- losing to each of its division rivals in sequence, even Vanderbilt and Kentucky -- it could be that the Bulldogs are a more efficient Giving Tree than Shel Silverstein could've ever envisioned. But I'm going to hope that metaphor doesn't go any further than it already has.

Instead, I'll say the Dawgs are Alice in Wonderland. We've fallen down the rabbit hole into a mysterious, magical SEC in which Auburn sucks out loud, Kentucky is awesome, Ole Miss can't score on anybody, Tennessee can't stop anybody, Spurrier is coaching the Gamecocks, Nick Saban is coaching in Tuscaloosa, and the only recognizable aspect is the fact that the Jabberwocky, Florida, is still coming to kick our fucking asses. Either way, we're going to be lucky to make it out of this thing alive; it's enough to make me want to hop up on a mushroom with the Caterpillar and smoke that hookah until my eyes are permanently crossed. 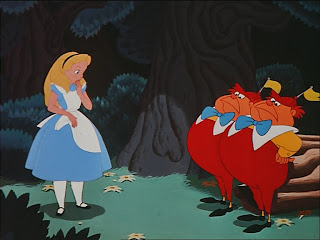 When do we get to the "Drink Me" part? And which one of you is Fulmer?

4. Imagine you're the coach of your team. Give three specific changes you'd implement immediately which you think would have the biggest impact on improving the team.

1. Make Knowshon Moreno the starting tailback. He's not a finished product just yet, but he's been the most consistently electrifying weapon in Georgia's offensive stable so far, and he's the one most likely to break a big play against Alabama this weekend.

2. No more playing for field goals. In 13 trips inside the red zone so far this season, Georgia has nine TDs and three field goals -- not too bad, until you realize that all nine came against Oklahoma State and Western Carolina. So far, Mike Bobo's playcalling hasn't completely broken free of the ultraconservative, let's-just-settle-for-a-figgie philosophy that typified Richt's offense before he handed the reins over to a true OC -- and it needs to. 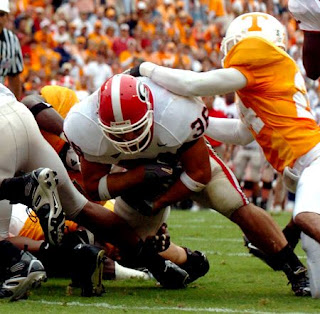 Upon crossing the goal line, Brannan Southerland finds to his surprise that it is not, in fact, electrified.

3. Utilize the tight ends more. I realize our TEs are fairly inexperienced, so throwing to them is going to be a little dicier than it would be if they were, say, Leonard Pope or Ben Watson. But still, Georgia has developed quite a reputation for developing awesome tight ends over the past 10 years or so, and we've managed to do that by utilizing them in innovative ways. Tripp Chandler and Bruce Figgins have caught a grand total of six passes in three games so far, and while that number would probably be higher if Chandler hadn't been suspended for the Oklahoma State game, these guys have way too much potential to be settling for 1.2 receptions per game played.

5. USC, LSU/Florida, and Oklahoma have established themselves as the frontrunners in the early going. Which other team or teams are you eyeballing as potential BCS party crashers?

Boston College's toughest remaining game is at Virginia Tech. If the Eagles can win that -- which they did last year -- and then perform as swimmingly in a potential Georgia Tech rematch in the league title game as they did in stuffing the Yellow Jackets last Saturday, they've got a chance. Yeah, the ACC sucks, but it also means BC has an easier roll to 12-0 than any of the "frontrunners" mentioned in the question -- and there's a decent chance 12-0 Boston College could get picked ahead of a USC or LSU with one late-in-the-season loss on their schedules.

Ohio State is positioned similarly nicely to take advantage of a shit-tastic conference, though I'm not sold on their offense after one good outing against Washington and still think they'll probably lose to either Penn State, Wisky, or Michigan down the stretch. But even with one loss, their name-brand status might be enough to boost them to a title shot if everyone else has taken a hit by the end of the season, too.

As far as non-BCS interlopers? Nope, not this year. The only serious contender that hasn't lost yet is Hawaii, but they're not gonna come within ten miles of the BCS top 12, and the only reason I need to back me up on that comes in the form of the Warriors' opponent this weekend: Charleston Southern, who I didn't even know had a football program in the first place. They'll be the second D-IAA team the Warriors have tricked into coming to Aloha Stadium this season (the other was Northern Colorado, who went 1-10 last year), and if that doesn't automatically disqualify you from The Show, it should. 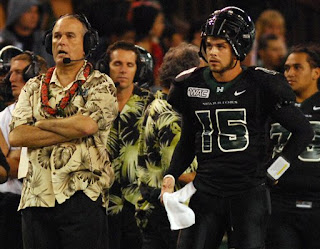 Hawaii has actually had a great deal of trouble scheduling OOC games recently. In fact, one of their 1AA cupcakes was a last-minute replacement for a school (I think a BCS-conference school) that canceled on them.

Not that that makes their schedule any more impressive, but you can't blame Hawaii for it.

Yeah, seriously. Michigan St. pulled out of its Hawaii game because it didn't want to pay for the travel, so Hawaii had to schedule a second FCS school at the last minute.
I'm totally sympathetic to the idea that WAC football is inherently inferior, because it's true.
But! If Hawaii wins the WAC and goes undefeated, it deserves a spot in a BCS Bowl. In fact, I'll go out on a limb and say that ANY FBS team that goes undefeated should play in a BCS Bowl. What does a team in a lesser conference have to do? Going undefeated should be a sufficient accomplishment to get a shot at the big time.