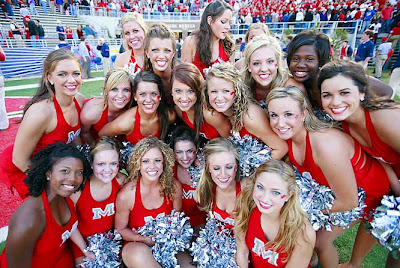 What I said at the time: Orgeron was brazenly mocked -- brazenly, I say! --

. . . [W]hile Ed Orgeron’s recruiting has been (allegedly) superb, there is a considerable level of un-ripened-ness behind the front four. . . . I know I’m risking life and limb by saying this, but I remain unconvinced that he's got any business coaching in the SEC. There are not enough drugs in the world to whisk me off to the alternate reality in which The Ogre is still employed on December 1, 2008.

— and a convincing, multiple-score win was predicted:

The Rebels played Georgia a lot closer than anybody expected last year, but Georgia will be a lot better on offense than they were in ’06, while Ole Miss . . . well, that’s anybody’s guess. . . . Ole Miss just isn’t going to have enough offensive balance to keep up with Georgia on the scoreboard; if the Dawgs can build a big enough lead, Ole Miss will have to start passing instead of just dumping the whole game on [BenJarvus Green-Ellis]’s back, and that’s going to spell trouble for the Rebs. Georgia should be able to win by at least two touchdowns. 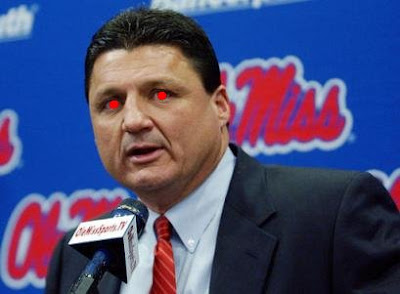 Orgeron doesn't just know I said that; he could hear me typing it.

What's happened since then: Georgia shrugged off a dispiriting loss to South Carolina and beat #16 Alabama on the road to sit at 3-1, 1-1 in the SEC; Mississippi held off Memphis in their opener but went downhill from there, losing by multiple scores to Missouri and Vanderbilt before managing to look not all that horrible in a loss to then-third-ranked Florida last week.

Care to amend your initial statement, sir?: Yes, in the sense that I'm no longer confident that Georgia is going to win by nearly that much. It sounds strange to say that mere days after Georgia walked out of Bryant-Denny with a win over the #16 team in the country, but that very same Alabama team provided an object lesson in just how difficult it is to follow up an important, emotional win with an equally stirring performance. After making an inspired -- and, by recent Alabama standards, rare -- comeback against Arkansas in week three, the Tide came out rather flat against Georgia in the first half, getting held to just 114 total yards and five first downs until they put together a field-goal drive and got some points on the board right as the first half expired. Granted, they came back impressively in the fourth quarter and forced overtime, but they showed very little of the pop they had displayed in piling up a 21-0 first-quarter lead against the Razorbacks the previous week.

Well, now Georgia is in the position of having to come up with an impressive sequel to a big conference win, which is easier said than done, as anyone who witnessed the Georgia-Tennessee game in 2004 will attest. Or, hell, anyone who saw Ole Miss take Florida down to the wire just last week. Nothing against the Rebels, but I seriously doubt that QB Seth Adams just suddenly figured out how to throw for 302 yards right before he was to face the #3 team in the nation; more likely, that statistic has to do with an underclassman-heavy Florida defense that was perhaps a wee bit hung over and focus-deprived after crushing Tennessee the previous week. 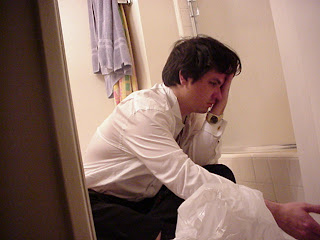 Just go on and complete you passes or whatever, dude. My head is killing me.

If that's the case, then the best-case scenario for Georgia -- Ole Miss isn't really that good, they were just able to take advantage of a team that wasn't paying attention -- isn't really best-case at all, since Georgia is every bit as likely to come into this game hung over from a big victory as Florida was from theirs. There are some mitigating circumstances here, of course; Georgia has the home-field advantage for this one, which the Gators didn't, and it's possible that Ole Miss could be bummed out by letting an amazing upset slip through their fingers and will thus come into the game every bit as flat as Georgia. Nevertheless, given Georgia's longstanding penchant for playing down to the level of its opponents (anyone remember how long it took for them to put away the Rebels last year?), I can't picture this game being a whole lot of fun for Bulldog fans to watch.

Now, in the preseason preview, I predicted that tailback BenJarvus Green-Ellis would be the workhorse for the Ole Miss offense against Georgia, but more than half of his 408 rushing yards this season came against one team, Missouri (whose rushing defense is currently languishing at 73rd in the nation despite a fairly cupcakey early schedule). Take away that outlier and he's only got 182 yards on the season (and a per-carry average of 3.3); this leads me to believe that he may not be the biggest threat on the Rebels' offense after all. Even if a substantial portion of Adams's passing production has come in late, desperate comeback attempts against Missouri, Vandy, and Florida, he's still got this passing game moving a hell of a lot better than Brent Schaeffer ever did, and after last week it wouldn't surprise me to see Ed Orgeron get a wild hair and test Georgia down the field early on. 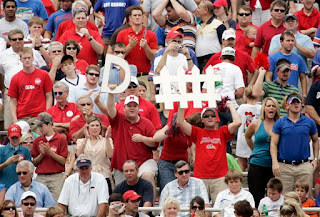 Based on the Rebels' performance so far this year, they might as well be holding up a sign that says "We Want Unicorns."

Fortunately, Ole Miss's defense is bad bad bad -- they're 91st in the nation against the run and even worse against the pass, allowing more than 280 yards per game. So Georgia should be able to get some useful production out of an offense that could still use some fine-tuning. I'm worried, though, that our defense -- which really looked gassed by the end of the Alabama game, despite their impressive stand on Bama's overtime possession -- is going to get caught unawares. It shouldn't happen, of course, but that doesn't mean it won't. Senator Blutarsky sounds the wake-up call with some additional (and insightful) cold water here.

I'd be surprised if Ole Miss held a lead for much of the game this weekend, if at all, but I'd also be surprised if Georgia ever led by more than, say, 10 points -- the oddsmakers say Georgia should beat Mississippi by 15, but that seems like a spread that's tailor-made for Georgia to not beat in situations like these. Georgia would still have to fuck up pretty badly to lose this one at home, but I'm dialing down my margin-of-victory to a single TD -- final score, something like 27-20, with at least one of our RBs breaking the century mark but Adams throwing for close to 300.

I will run up and down Highland Avenue in front of my apartment building wearing nothing but a Georgia flag if: Georgia wins by 20 points or more. I mean, given the talent and coaching disparities in play here, we should win by that many. The popular refrain we've been hearing for the last few days is that the Dawgs "grew up" in their win in Tuscaloosa, but if they can keep their foot on the gas even in the wake of that victory and maintain enough focus to lay an appropriate hurtin' on a team that they shouldn't have much of a problem with, then I'll know that they truly have the maturity to take on anyone, anywhere.
Posted by Astronaut Mike Dexter at 8:22 AM

I may have mentioned this before, but my study partner in law school was an Ole Miss Rebelette.

My prediction for the game is I had lunch yesterday with a former Ole Miss Rebelette and you all didn't.

I mostly agree...but if Erik Ainge couldn't break 300 yds. passing in The Game I Shall Not Speak Of last year, no way some chump from Ole Miss does it.

Couldn't agree more. This week won't be fun for you Georgia fans. You'll win, yes. But you're not going to enjoy it.

But you will enjoy saying BenJarvus Green-Ellis over and over amongst yourselves.

Ack! This crazy full moon cfb weekend killed me in the pick'em group. My Trojans won, but I even lost on that spread.